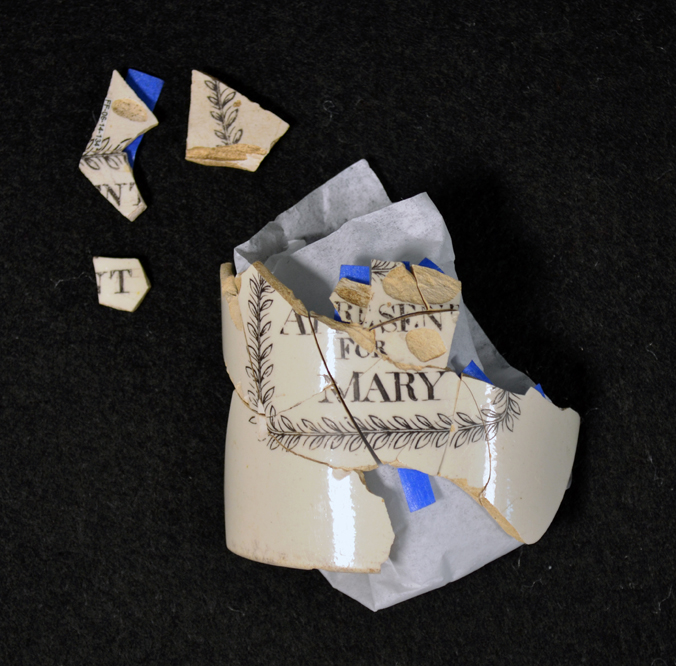 Archaeologists are always trying to link artifacts with the actual people who lived at the sites we study.  As such, we get very excited when we find artifacts with people’s names on them.  It makes our job easy, right?  So, imagine our elation when a small creamware cup bearing the words “A Present For Mary” in black transfer print was unearthed at George Washington’s Ferry Farm.  People immediately assumed it must have belonged to George’s mother Mary Washington, the most famous Mary to live here.  However, upon closer inspection this theory totally unraveled.  The small cup was in fact a child’s mug manufactured long after Mary had grown up and, for that matter, probably after her death.  It could never have been owned by Mary Washington.  What seemed an open and shut case got a little more interesting.

First off, what was a child’s mug?  Well, it was a common and inexpensive small mug given to children as a reward for learning, doing well in Sunday school, or general good behavior.  The mugs were fairly small and decorated with the child’s name, bible verses, images of play, or references to learning.  Inspiration for these decorations came from the popular children’s books of the time.  A few common sayings found on these mugs were: 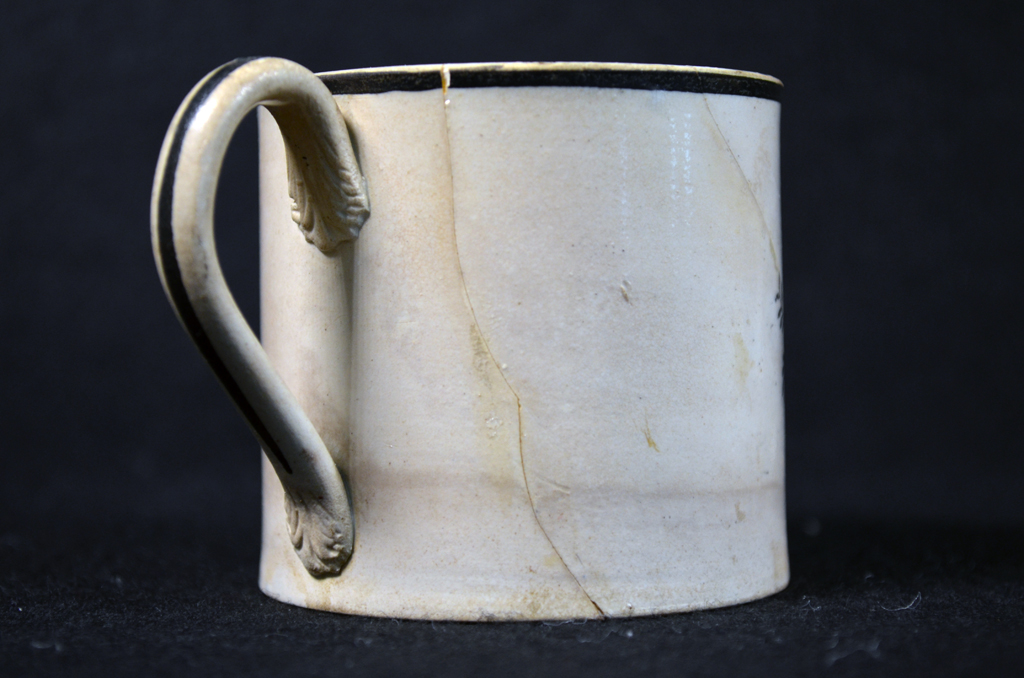 Example of a complete mended pearlware child’s mug with a whimsical phrase illustrated in black transferprint.

These mugs were similar to christening mugs, which are still common gifts today.  While they have the same shape and are given to children, the two types of cup differ in material and purpose.  A child’s mug was mass-produced in factories and made of relatively cheap ceramic.  It would have been sold for a few pennies.  In contrast, a christening mug was a fancier gift, often made of far more expensive silver or porcelain.  Similar to our fine china today, these christening mugs weren’t meant for everyday use like the more ordinary child’s mugs.  Indeed, excavated child’s mugs often exhibit extensive use wear from being handled by children.

Ceramic child’s cups were manufactured starting in the late 1700s and remained abundant by the mid-1800s.  Their rise in popularity coincided with the emergence of a more modern concept of childhood. Prior to the 19th century, children were treated like tiny adults or pre-adults.  They dressed like adults and the few toys that did exist reinforced social roles and instructed children how to perform adult tasks.  It wasn’t until the 1800s that childhood became distinct from adulthood.  With this change, children became a new marketing demographic with books, toys, and ceramics targeted just at them.

In our efforts to find more fragments of the mystery Mary mug, we scoured the Ferry Farm artifact database and not only discovered more of her mug but also sherds from three other child’s mugs!  While two of these do not contain complete names, one pearlware mug clearly reads “A Present For Billy”.

Pearlware and Creamware sherds representing, clockwise, at least four child’s mugs. All include the phrase “A Present For…” Two names are visible. ‘Mary’ can be seen on far right mug in grouping 2 and the partial name ‘Billy’ is exhibited on the lower middle sherd marked 3.

Unfortunately, the dates during which these mugs were manufactured fall within a fifty year gap in our knowledge of who exactly was living at Ferry Farm.  From the late 18th century to the first quarter of the 19th century, an absentee owner rented the land to tenants. Information on just who those tenants were has been lost to time.  In a sense, this makes the discovery of the mugs even more special.  Although we’ll probably never precisely know the Mary and Billy the mugs belonged to, we now know that two children with those names lived and played here.  Anonymous no more, these simple sherds are likely all the evidence there is to proclaim their time at Ferry Farm.  While the children may have been sad upon breaking their mugs, we’re very happy to have what remains and hope to one day expand upon their stories.