As modern people, we tend to assume the past is a foreign land where residents’ lives are alien to our own. Would the founding fathers balk at how we dither away our time? Or would they recognize that life without its moments of levity is foolish?

Eighteenth century America was a time of growing leisure activities. Colonists enjoyed playing games, watching horseraces, or going to an evening of theatre. But for anyone who has ever passed the time with solitaire or gone all-in with a pair of Kings, you have passed the time in a way George Washington would recognize immediately.

The entire history of playing cards is massive and sometimes convoluted. Opposing origins, numerous legends, and the lack of definitive documentation make a ‘brief history’ all but impossible. But a few things are known.

Playing cards used strictly for games have been around for thousands of years but the oldest recognizable relatives to our modern playing cards appeared in Europe in the latter half of the 1300s. At this time, France saw a rise in the popularity of expensive and elaborate fortune-telling  Tarot cards, not the everyman game familiar to modern audiences.

Around the same time, we find references to card games in Italy that speak most directly to our modern notion of cards. Here their earliest decks contain familiar features: cards numbered one to ten, four royal court cards, and four suits including cups/chalices (coppe), coins(denari), swords (spade), and club/baton (bastoni).

Suits in a reproduction set of 18th century playing cards seen in a screen capture from an upcoming Lives & Legacies video about how to play Whist, a game popular with colonial Americans.

By the beginning of the new century, the 1400s, references to people playing ‘cards’ are seen all across Europe.  Card numbers, royalty, and suit continued to change across Europe for the next 200 years and featured plenty of regional differences.

For the most part there were four suits, but what those suits were was debatable. Other suits in Europe (some even today) included roses, bells, acorns, shields, leaves, pikes, tiles, clovers, hearts, and of course diamonds.

The royal cards varied from deck to deck, much like the royalty and ruling elite varied in the nations of Europe. Some decks had no queen, others included clergy, sometimes it was three royal cardsand other times there were four. There was one constant, however, there was always a King and he was the highest in the deck. 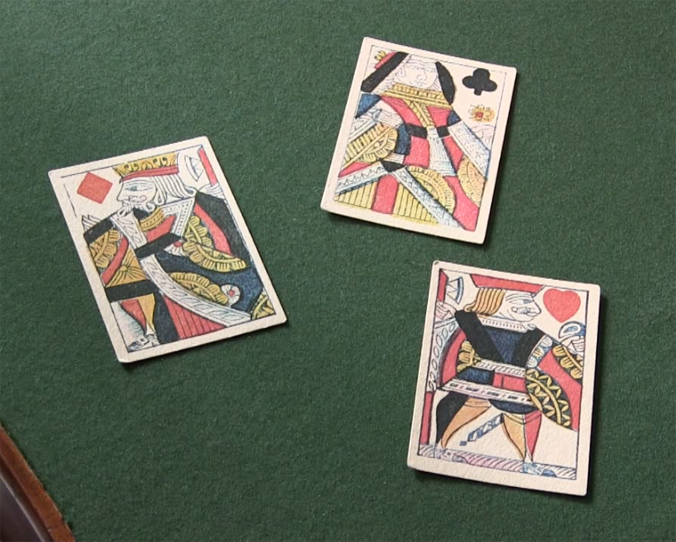 The King, Queen, and Knave in a reproduction set of 18th century playing cards. When printed numbers and letters (K, Q, J) were added to cards, the Knave came to be called the Jack so it would not be mistaken for the King.

By the early 17th century, England had a standardized deck (based on the ‘French’ deck) made up of the four suits we know, numeric cards one to ten, Knave, Queen, and King. This is the deck we still use today.

By this time, cards even started to play a role in politics. In 1615, as an effort to cease the importation of foreign cards and raise revenue, King James I placed a duty on imported cards and appointed an office to inspect playing cards. Although initially unpopular with commoners who preferred the cheap foreign cards, ultimately the duty persisted. The King and Parliament tried to levy a similar duty with the Stamp Act 150 years later, which many credit with beginning American opposition to British taxation that ultimately led to Revolution.

Those 150 years were incredibly important to the growth the Colonies and of Virginia. They grew from rugged outposts in a strange land to thriving cities and societies that weather the French and Indian War. The colonists earned their right to leisure and wanted to enjoy it! 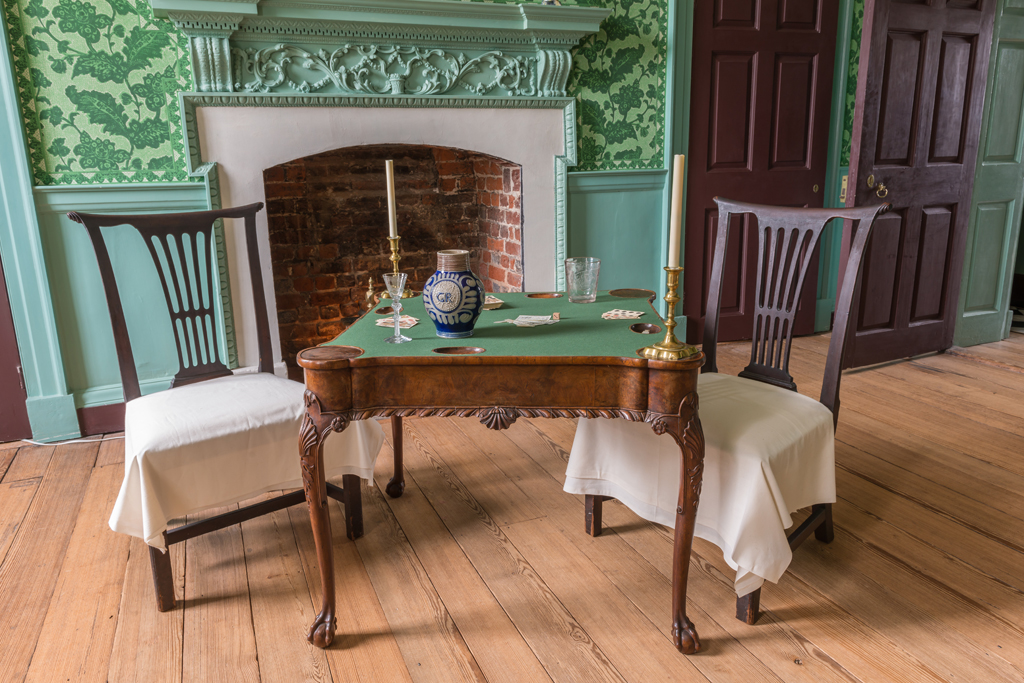 The walnut gaming table in Historic Kenmore’s drawing room was made in England around the year 1760. The table top is covered in green baize (felted wool, similar to what you find on modern billiards tables) with wells to hold gaming chips and “turrets” at the corners to hold candlesticks. 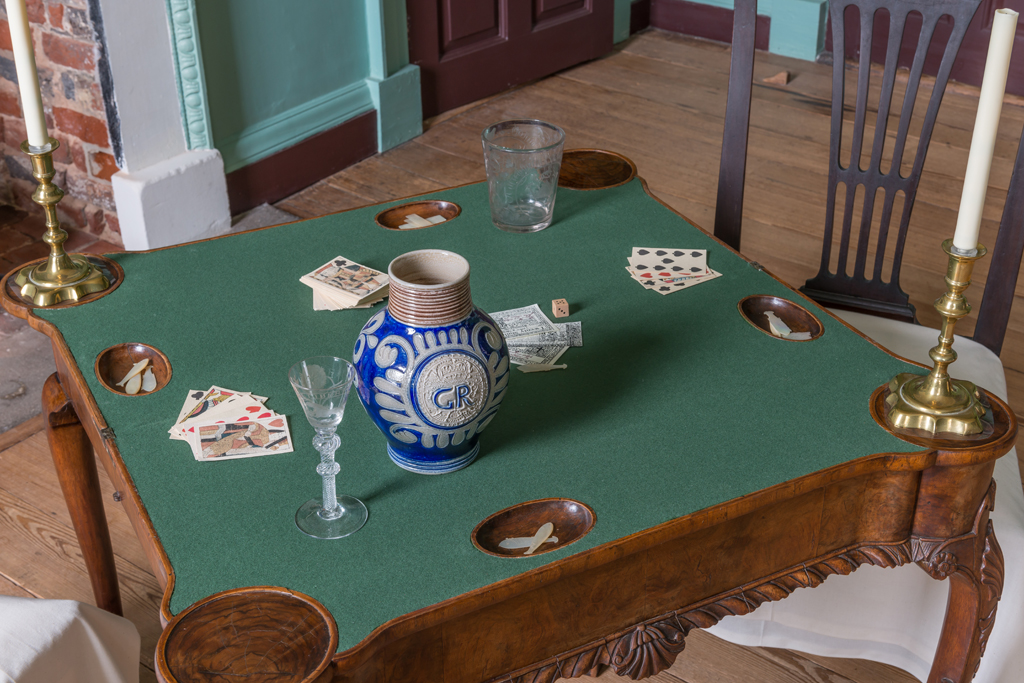 The table has a possible connection to the Washington family, in that it might have descended through George Washington’s younger brother Charles’s family. That connection is still the subject of research, and it may be a while before we are able to conclusively prove or disprove that provenance.

Prior to the Revolution, Virginians prided themselves in being British! They enjoyed British rights, food, drink, and pastimes like horseracing, dancing, and of course, playing cards. It would not be uncommon to see cards being played at the taverns or at gaming tables in drawing rooms, by all members of Virginia society. We only need to look at the probate inventory of Fielding Lewis to discover what games they played for among the books included in his library it lists ‘Hoyl 1 Vol’.

In 1742, Edmond Hoyle published a Short Treatise on the Game of Whist. This pamphlet taught the rules to Whist as well as the best hands/plays  and was an immediate success! Hoyle continued to expand his Treatise to include other games such as back gammon and chess. Ultimately, the book’s 15 editions made it the standard instructional for card games in the English-speaking world. You can read a bit more about Hoyle and, more importantly, about gaming pieces used in the 1700s on The Rooms at Kenmore blog here. 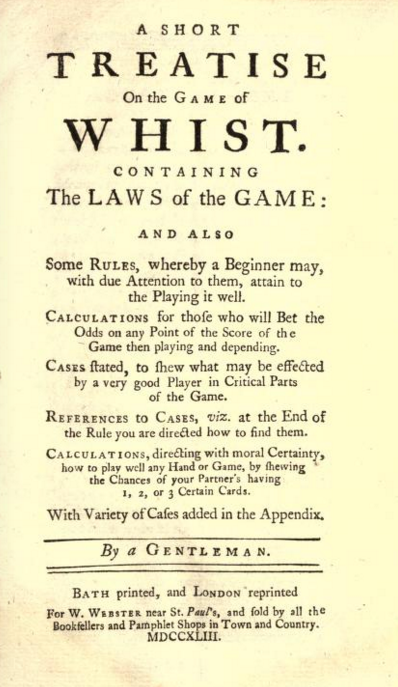 Front page of Hoyle’s Short Treatise on the Game of Whist, published in 1743.

And, finally, if there is any doubt to whether or not colonial men enjoyed the pastime of playing cards, we need only look at George Washington and Colonel Fielding Lewis. On December 23, 1769, George Washington stopped in Fredericksburg while returning home to Mt. Vernon. He would spend Christmas Day with his sister and brother-in-law and won ‘£2 5s at cards’. Whether George and Fielding both enjoyed that specific game may be lost to history, but how they spent that holiday is undeniable; they played cards.

Whether for the game of Whist set out on Kenmore’s gaming table or the game of Hearts you play with your family at home, playing cards have a history that can be traced over the centuries and across the globe. It is a history that we share as directly with one another as well as with our founding fathers.

Editor’s Note: Watch for an upcoming video about how to play the game of Whist coming soon!