In the 17th and 18th centuries, colonial Virginians decorated their homes for Christmas with all manner of evergreens.  This greenery – holly, ivy, mistletoe, and more – were seen as symbols of everlasting life.  Each year at Historic Kenmore, we also decorate the house with greenery in this tradition. 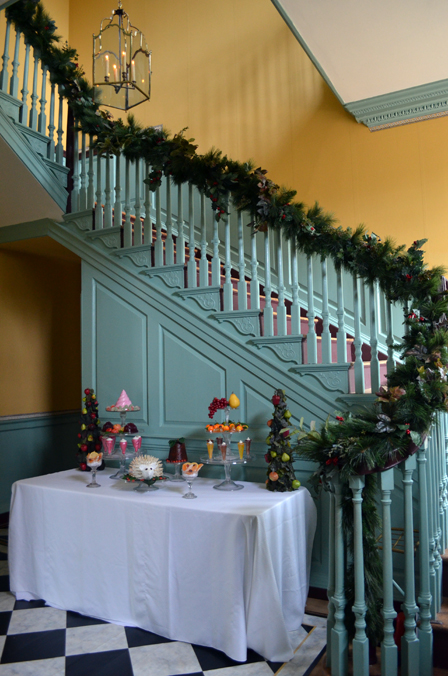 Greenery along the banister in the Passage at Kenmore.

Mistletoe actually adorns Kenmore year round. The elaborate plaster ceiling in the drawing room depicts the four seasons and mistletoe is used to represent winter.  The mistletoe depicted, however, is not American mistletoe; the craftsman based this part of the ceiling on European mistletoe instead. This makes sense given that the artist was probably European. Having never seen American mistletoe, he would not know how to sculpt it.

Regardless of whether American or European, how did mistletoe come to symbolize winter and hang in homes during the holiday season? How did these green branches with white berries become associated with the hope of a little fun and (possible) future romances? What is it about mistletoe that brings so much joy to the seasons’ festivities?

Mistletoe (Phoradendron leucarpum) grows in the southern United States and is native to much of North America. It has more berries and shorter, broader leaves than English mistletoe (Viscum album). Like English mistletoe, the American plant is a semi-parasite; it digs its “roots” in the host tree and sucks sap and water from the tree, but it manufactures its own chlorophyll.  Mistletoe often grows in the tallest branches of the tree, making it very hard to harvest. 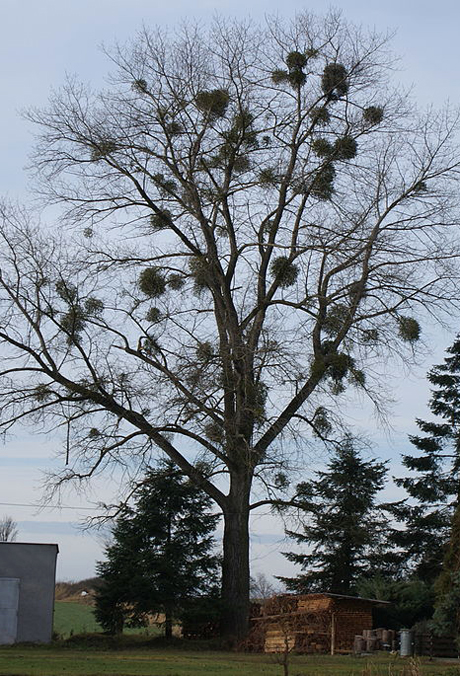 Mistletoe in a tree. Credit: Feťour/Wikipedia.

The word “mistletoe” likely came from one of two sources.  Its origins may be from the Anglo-Saxon “misteltan;” “mistl” meaning different and “tan” meaning twig. Mistletoe is a very “different twig” indeed because of how and where it grows – something that would not have escaped the notice of the Anglo-Saxons.  The word’s other possible origin also translates “tan” as twig, but renders “mistel” as dung; making “mistletoe”  “dung twig.” This may have been because bird droppings contained the seeds that helped spread the plants to other trees.

Imaginative illustration of ‘An Arch Druid in His Judicial Habit’ from The Costume of the Original Inhabitants of the British Islands by S.R. Meyrick and C.H. Smith (1815) Credit: Wikipedia.

Druids, who served as priests and the learned class for the ancient Celts, valued mistletoe almost as much as they valued oak trees. These men (there is little evidence that there were women druids) climbed to the top of mistletoe-laden trees and harvested the sacred plant with a golden sickle. Those on the ground were careful to catch the plant as it fell because they believed the mistletoe would lose all of its power if it hit the ground.  Druids then used it to cure disease and promote fertility in humans and animals. It may be that the custom of hanging mistletoe stems from a Druidic tradition. Enemies who met under the mistletoe would lay down their arms and greet each other as if friends.

Mistletoe also played a role in Norse mythology and some think that our modern views on mistletoe came from one particular Norse myth. Balder, a god of peace, was the son of Odin, chief of the gods, and the goddess Frigg.  Balder began to dream of his own demise and his father traveled to the underworld to learn of his son’s fate.

Odin returned and shared the bad news with Balder and the other gods and goddesses. Frigg went to everything in the cosmos and asked it to swear it would not hurt her son.  Everything swore loyalty but mistletoe.  Loki, the god of mischief, made some mistletoe into an arrow that killed Balder.  In the version of the story with a happy ending, Balder was brought back to life and Frigg makes mistletoe a symbol of love and kisses to those who pass under it.

The English origins of kissing under the mistletoe aren’t well known. Historical records indicate that this merriment became popular in England sometime in the 16th century, but we don’t know if it was commonplace before that.  English mistletoe etiquette had some hard-and-fast rules: women under the mistletoe were not to refuse kisses; men could only kiss women (or girls) on the cheek; after the kissing transaction, the man removed a berry from the mistletoe ball; after the last berry was plucked, the kissing ended.

Harvesting mistletoe is a challenge, but 18th century Virginians came up with an ingenious way to quickly and easily gather the plant.  Instead of climbing up into the tree’s canopy, Virginian men shot the mistletoe out of the tree.  They then took the good sprigs home, fashioned them into mistletoe balls, and enjoyed the merriment of the season.  This tradition harvesting mistletoe through gunfire still continues today all over the American south.

Ancient Druids. Mythical Norse gods. 18th century Virginians. Over the centuries, these people, whether real or imagined, contributed to the myths and traditions that have made mistletoe a symbol of winter, friendship, and love.  When you share a kiss with someone special under the mistletoe this season, you might want to take a moment to share mistletoe’s long history with that someone too.