Editor’s Note: This Friday, Saturday, and Sunday, Historic Kenmore presents its annual production of Twelfth Night at Kenmore (click for event details). This dramatic theatre presentation imagines the first Christmas that Fielding and Betty Lewis celebrate in their newly built home. It is not the usual joyous atmosphere, however. The Revolutionary War brings fear, doubt, and frustration to the Lewis family and their friends. Among these friends is Henry Mitchell, whose support for the American cause is being questioned by his neighbors and by Henry himself. Mitchell is a new character for this year’s Twelfth Night but was also a real merchant living in Fredericksburg in the 1700s. To create this character, we researched the real Henry Mitchell. This blog post shares the fascinating story we discovered.

When we look back over two centuries, victory in the American War of Independence seems inevitable.  Similarly, we often think that all of our ancestors chose the ‘right’ side and supported independence during the Revolution.  Things were far more complex, of course.  A sizable portion of the population — two historians say about 20% — living in British North America opposed revolution and fought against independence. 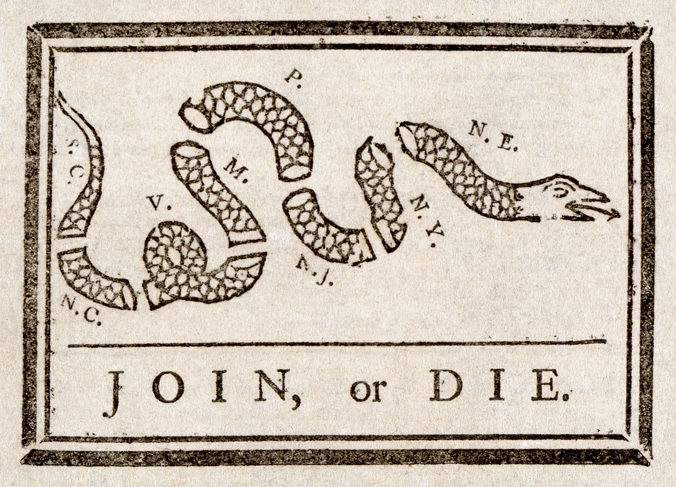 This political cartoon from the a 1754 edition of The Pennsylvania Gazette and believed to have been created by Benjamin Franklin originally appeared during the French and Indian War but was used again during the American Revolution to encourage the colonies to unite against British rule. Credit: Library of Congress

One such individual in Fredericksburg, Virginia was Henry Mitchell, a merchant born in Scotland who came to America, lived in Fredericksburg for nearly two decades, and worked as the Virginia-based factor (representative) for a trading house in Glasgow.[1]

Henry Mitchell participated in the community and, in the early days of tensions between the colonies and the mother country, took part in the anti-British non-importation movement known as the Virginia Association.  Indeed, Mitchell was named an Associator on October 23, 1770, the same day Fielding Lewis was placed on the committee as noted in the Virginia Gazette.  The Associators made sure the local populace did not purchase boycotted goods. The Association lasted a short-while before collapsing in 1771.[2]

Along with this political activity, Mitchell frequented George Weedon’s tavern and, on December 27, 1773, attended “dinner and club” with Fielding Lewis and several other Fredericksburg luminaries before Masonic services.[3]

Then, a strange incident took place in early 1775.  In nearby Orange County, as reported in the Virginia Gazette, Rev. John Wingate was brought before the local patriot committee to answer for allegedly possessing “pamphlets containing very obnoxious reflections on the Continental Congress and their proceedings.”  He was ordered to produce the pamphlets. Wingate refused, saying “that they belonged to Mr. Henry Mitchell of Fredericksburg” and that he could not show them to the committee without Mitchell’s “express permission.”  The committee tried to persuade Wingate that since Mitchell “was well known to be an associator, and acknowledged by himself to be a hearty friend to the cause” that he would not mind if they looked at the pamphlets.  Then, they noted ominously that “if Mr. Mitchell was not this hearty friend we hoped him to be,” then the committee would demand Mitchell himself come before them and show them the pamphlets.  Wingate finally relented and no further discussion of Mitchell was recorded.

This incident raises all sorts of questions.  Did the pamphlets really belong to Henry Mitchell? Was Wingate telling the truth or attempting to smear Mitchell for some reason? Was Mitchell undergoing some kind of change that had caused or was causing him to shift from supporting the anti-British Virginia Association to embracing loyalism?  Were his earlier patriot leanings an act? If so, to what purpose?  If you’re not careful, you can succumb to all sorts of wild speculation!

Mitchell continued his trade in Fredericksburg throughout 1775. Then, at the end of the year, he placed an ad in the December 8 edition of the Virginia Gazette announcing he would be leaving the colony in the spring and that he wished to settle his accounts before departing. Although loyalists often made their intentions to leave known in this way, Mitchell specifically noted his plans to return.

In July 1776, merchants in Fredericksburg suspected of loyalism were brought before the local committee and direct to either take a loyalty oath as required by the most recent Virginia Convention or, if they would not do so, to give up their arms. Henry Mitchell was among this group of, as the Virginia Gazette put it, “Sundry persons, supposed to be inimical to America” and refused to take the oath.  Having refused to swear allegiance to the American cause, he and other loyalists they were ordered to be sent the governor so they could be expelled from Virginia.[4]

This expulsion did not happen immediately, however. Mitchell finally placed an ad in the Virginia Gazette on February 21, 1777 announcing his intention “to leave this Country” permanently and notifying those to whom he owed debts and vice versa to settle them up.  He also advertised his houses in Fredericksburg as available for sale or rent. 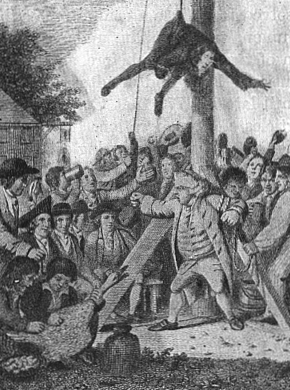 “Mobbing the Tories” illustration in History of the United States by Charles A. Beard and Mary R. Beard, New York: McMillan, 1921

Why did Henry Mitchell and vast numbers of colonists choose to remain loyal to the crown instead of supporting independence?  The answer to that question really comes down to each individual loyalist whose motivations were often very personal and unique.  Unfortunately, we do not know Mitchell’s particular reasons.  People who found themselves held under suspicion by their patriot neighbors were often pushed to loyalism by the fear of mob rule or anarchy.  The patriots’ use of loyalty oaths may have actually created many loyalists.  People resented being forced to choose sides.  Meanwhile, merchants and others whose livelihood depended on trade with Britain and the rest of the empire sometimes choose empire over independence for simple but powerful economic motivations.[5]

In 1777, Mitchell finally left Fredericksburg for H.M.S. Phoenix and went to New York, where he lived until 1781 and continued his trading activities.  He then sailed to Scotland in 1781 and found his “partners had misapplied remittances” sent from Virginia.  He was left bankrupt and dependent on relatives.[6]