Here on Lives & Legacies we’ve shown you a variety of important tasks that take place inside the Archaeology Lab at George Washington’s Ferry Farm. You’ve seen how we wash, catalog, label, and then mend vessels with archival glue. One goal of all this work is to piece together whole artifacts from the many broken bits found and share that whole artifact with our visitors as part of the exhibits in our museum gallery.  Right now, a new exhibit of white salt-glazed stoneware vessels is on display at Ferry Farm. It took numerous staff and volunteers working hundreds of hours to get the vessels on display ready to be exhibited. Here’s how we did it!

Seven reconstructed white salt-glazed (WSG) stoneware vessels make up a new exhibit at Ferry Farm.  These pieces, which include two dinner plates, a fruit dish, three ointment pots (used for mixing medicines and cosmetics), and a tea ware or condiment pot lid, were all excavated from the Ferry Farm site. These ceramics were popular during the mid-18th century and most likely graced the tables of the Washington family. 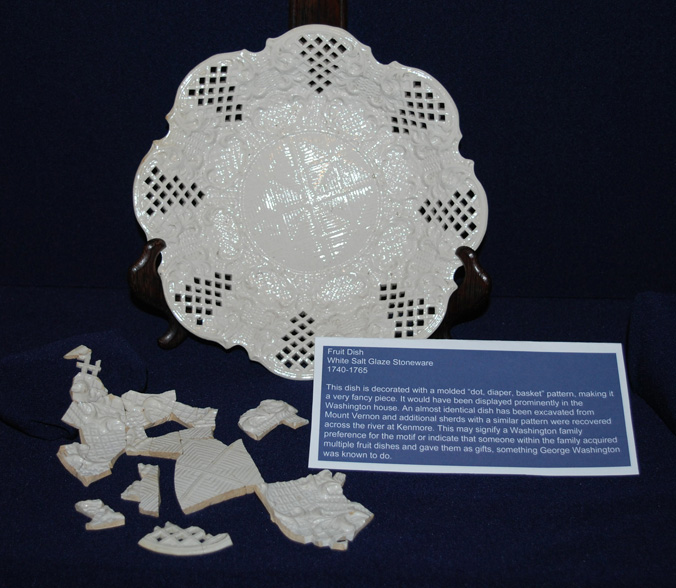 White salt glaze stoneware fruit dish, 1740-1765. The dish is decorated with a molded “dot, diaper, basket” pattern and would have been displayed prominently in the Washington house at Ferry Farm. An almost identical dish has been excavated at Mount Vernon and additional sherds with a similar pattern were recovered across the river at Kenmore. This may signify a Washington family preference for the motif or indicate that someone within the family acquired multiple fruit dishes and gave them as gifts, something George Washington was known to do.

In preparation for the exhibit, I spent the better part of three weeks in August and September finishing the documentation for the individual vessels and then meticulously gluing them together. This relatively small amount of time spent at the end of the project was only the tip of the iceberg – the total amount of time spent getting these pieces ready for exhibition encompassed a year and a half! Preparing these pieces to be displayed involved the hard work of numerous archaeology lab staff and volunteers.

November 2014 – January 2015: Executive decisions are made…
First, discussions were held within the archaeology department about studying Ferry Farm’s archaeological collection of white salt-glazed stoneware. Such a study would answer questions about the material setting of the Washington household and help with interpreting the forthcoming Washington house replica to the public. The project was given the go-ahead.

January 2015: Getting the lists together…
Using our searchable artifact database, we generated a list of every piece of white salt-glazed stoneware in our collection.  A total number of 1,623 artifact bags were on this list, representing over 2,800 actual sherds.

Screencap of the artifact database.

February 2015: Puzzle-solving begins!
We started pulling the 1,623 artifact bags from storage, and by my records, we were still pulling artifact bags in June.  Lab staff, volunteers, and, on rainy days, the excavation field crews helped with pulling the artifacts.

After making sure the sherds were labeled correctly, we laid them all out on one of the lab tables, which had been covered in a black foam board to make it easier to see the all-white ceramics. The sherds were first separated by decorative variations, such as plain white salt-glazed, slip-dipped, scratch blue, or dipped with iron oxide, and next by vessel part, such as rims, bases, and bodies. Then the cross-mending began.

Sherds of white salt glaze stoneware waiting to be mended together.

Over the next eleven months, countless hours were spent at the table looking for mends between the sherds.  Having identifiable vessel parts, such as rims and molded and decorative elements, helped in the matching process, but there were hundreds of plain white, non-descript sherds to try and fit together.  Pieces that mended were taped together with painter’s tape, which doesn’t leave an adhesive residue on the artifacts.

A friendly competition began and whoever had the most mends at the end of each month won a free lunch!  In all, everyone spent countless, addictive hours each week scrutinizing the sherds and patiently putting together “puzzles” for which, unfortunately, the majority of the pieces were missing. 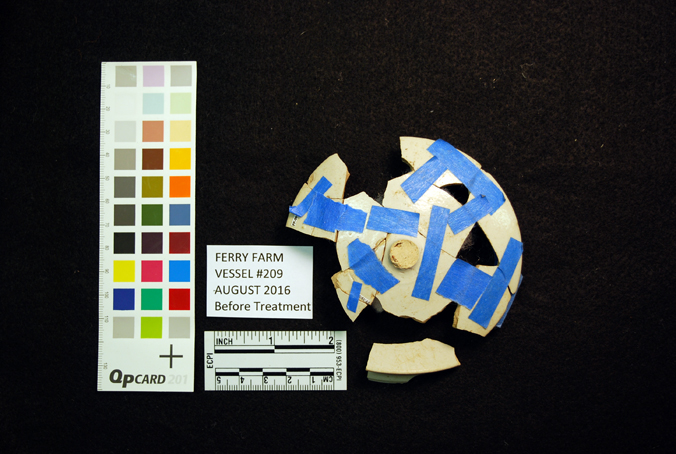 January 2016: Minimum Vessel Count…
After eleven months, we cried “uncle” to the cross-mending and started the minimum vessel count by figuring out how many and what types of individual WSG vessels were represented in our collection.  Under the supervision of Mara Kaktins, The George Washington Foundation’s ceramic and glass specialist, the sherds were separated into what we believed were individual vessels using the bases and rim styles.  By late April, our choices were firm and over sixty white salt-glazed vessels were identified.

July 2016: Putting the paperwork in order….
Treatment reports were started on the most complete vessels, which would be included in the new exhibit.  Each report listed all the sherds that made up each vessel and their condition. Photographs were taken to help with the mending and gluing.  The remaining white salt-glazed sherds on the table were separated into bags according to decorative and body type, their contexts recorded in a spreadsheet for our records, and then returned in storage.

August 2016: Finally, the fun part – gluing!
I started gluing the vessels using a product called B-72, an archival glue that can be removed, if necessary, and that we mix ourselves in the lab.  The design of the upcoming exhibit, including the layout, mounts and signage, was created by Meghan Budinger and Heather Baldus, the Foundation’s curatorial team. 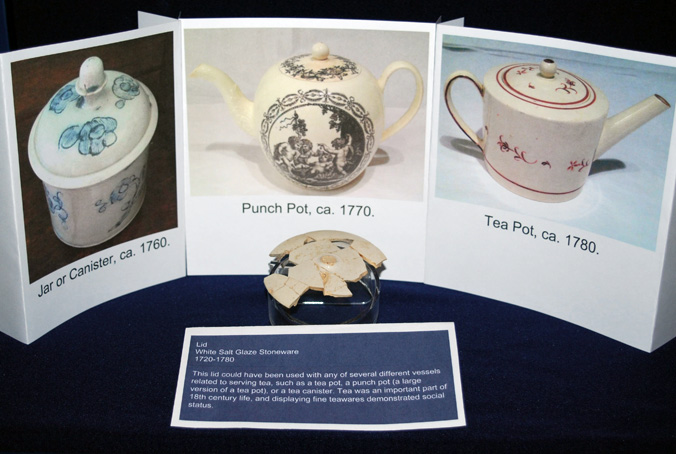 White salt glaze stoneware lid, 1720-1780. This lid could have been used with any of several different vessels related to serving tea, such as a tea pot, a punch put (a large version of a tea pot), or a tea canister. Tea was an important part of 18th century life, and displaying fine teawares demonstrated social status.

September 2016: Finishing touches…
The white salt-glazed stoneware exhibit is now installed and ready for the enjoyment of our visitors to Ferry Farm. A total of 614 days from report prep to exhibition! 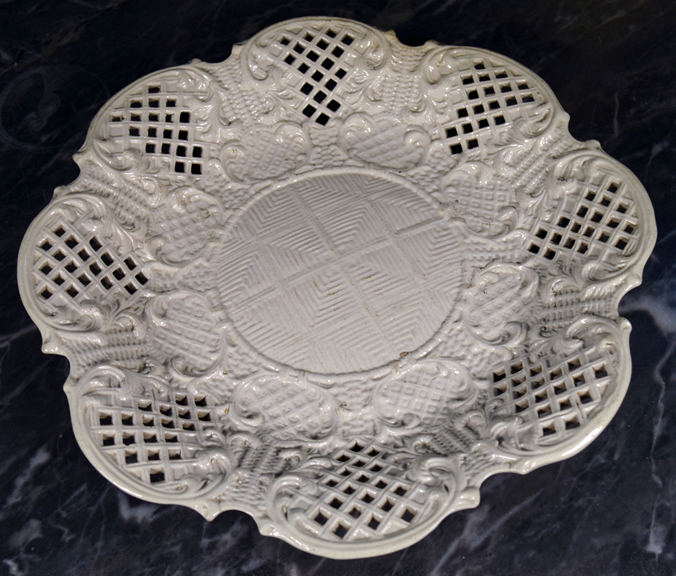 Want to see “in real life” the 18th century ceramic fruit dish we wrote about last August? You can see it and the matching sherds excavated by archaeologists on your next visit to George Washington’s Ferry Farm.

The dish sits inside the Ferry Farm visitor center in a museum display case now dedicated to Lives & Legacies.  In this exhibit case, we will showcase some of the artifacts, objects, and stories that we write about on the blog for people visiting George’s boyhood home. 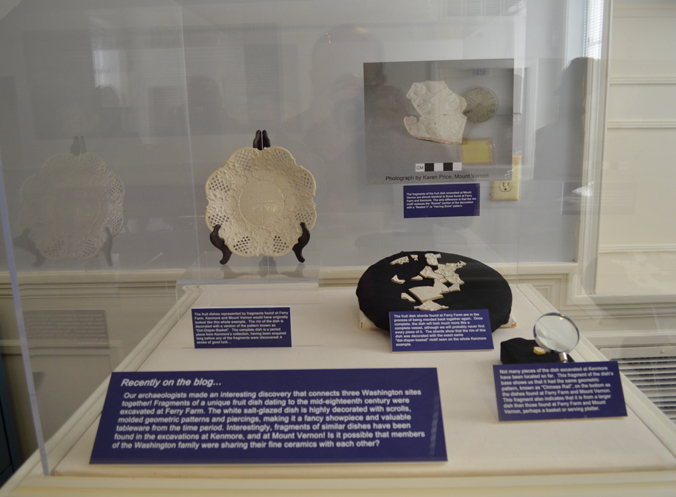 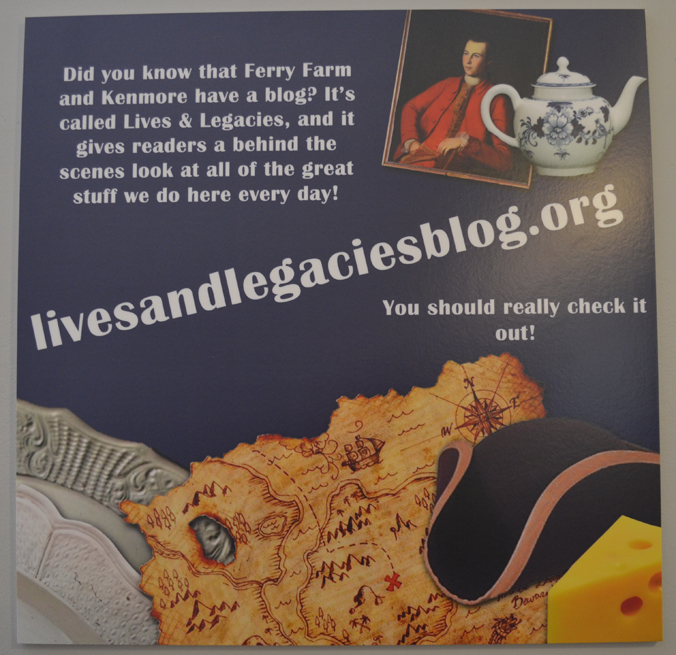 Along with taking the self-guided iPad tour “Uncovering George Washington’s Youth,” viewing the visitor center’s major exhibit “The Science of History at Ferry Farm,” and watching archaeologists at work at the dig site and in the lab, visitors can learn how archaeologists discovered fragments of the unique fruit dish and how the dish and its discovery connects three Washington sites – Ferry Farm, Kenmore, and Mount Vernon – together.

Future subjects for the display case include the glass base that may have been used as a spinning top, jewelry and personal accessories from the 18th century, and Westerwald ceramics found at Ferry Farm and Kenmore, among many others that you have seen on Lives & Legacies.  The case will be rotated regularly – stop in to check it out!

Back in late February, staff revamped the orientation exhibit in the visitors center at George Washington’s Ferry Farm.  The new exhibit called The Science of History at Ferry Farm tells the story of how archaeologists and historians discovered the location of the Washington family home using, in some cases, the latest scientific techniques.  It includes a variety of artifacts recovered from the house site.  This team effort involved members of the Curatorial, Archaeology, and Buildings and Grounds departments.  These photos present a glimpse behind-the-scenes into how an museum exhibit gets put together.

The process begins with a fresh coat of paint in the gallery space.

Archaeology and curatorial staff prepare objects to be moved from their temproary display case into the new exhibit area. 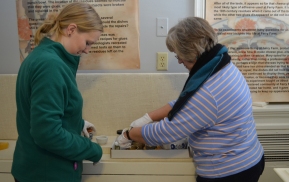 Staff wear white cotton gloves to protect the artifacts from damaging oils on their hands.

These objects form the part of the exhibit that explains how colonial people made glues to mend their ceramics. Several pieces of Mary Washington’s ceramics excavated at Ferry Farm have glue residue on them. 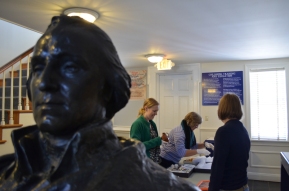 Glass covers await to be reunited with the display cases.

Proofing the new exhibit text a final time before hanging. 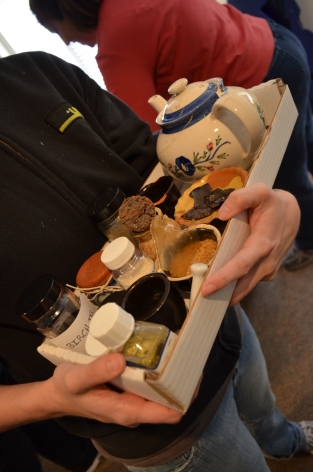 Here come the objects and artifacts.

Placing the objects back on display.