In this video, we make switchel, a summertime beverage popular in the 1700s. Its ingredients contain a lot of potassium which replenishes the body’s electrolytes. Learn more about switchel and other methods used to say cool in the 18th century on this blog post.

“You must be hot in that. I don’t know how colonial people wore such things.”
“I am a little hot, yes. It is hot out today. Aren’t you hot in what you’re wearing?
“I’m sweating buckets.”
“That’s funny, because I’m not.”

I have a variation of this conversation every time I’m in 18th-century dress.  Modern visitors can’t fathom how early Americans managed to keep cool in the sweltering summer heat.

Most methods are intuitive; hydration; light clothing; seasonal lifestyle changes; etc., but they seem to be just beyond the grasp of those who have never known life without air conditioning. Most modern readers will find these methods interesting, but few would be willing to give up the miracle of AC.

Switchel being poured into a mug.

Water in parts of England was not much better than the water in Virginia and Virginians used English methods to transform water into something potable. Virginian’s drank something called “small beer” and, in the observation of Reverend Gwatkin, “their [Children’s] common drink which is toddy or a mixture of rum water and sugar. In general is made pretty weak, the proportion being about a glass of rum to 6 of water.”[1] Gwatkin also observed that the women of the colony drank water and speculates that is one of the reasons they outlived the men.

Some enslaved Virginians were given rations of milk, but many relied on the local streams and dug wells that white Virginians did not trust. Even in instances where the water may have been compromised, a thirsty and exhausted enslaved man or woman were likely to partake anyway.[2]

Virginian’s seemed content to drink low-alcohol solutions to rescue themselves from thirst, but other British North Americans developed a different beverage to beat the heat. Switchel, which is also known as haymakers’ switchel, haymakers’ punch, and by many other names, was essential to New England farmers working out in the fields.

Recipes for switchel varied, but common ingredients included water, ground ginger, and a sweetening agent (molasses, sugar, honey, etc.).  As a number of lifestyle blogs will tell you, this beverage is refreshing and hydrating.  Of course, 18th century Americans knew nothing of hydration or electrolytes; it wasn’t until 1887 that these properties were discovered.[3]  Fortuitously, the switchel ingredients contain potassium, an electrolyte replenisher.

Dressing for the heat

One of the most important methods of keeping cool was dressing for the weather.  Modern Americans dress for the heat, but may not be doing as good a job as their 18th century counterparts.  Their secret: natural fibers.  Cotton, linen, and wool whisk sweat away from the body and dry relatively quickly.  On a hot summer day, I’ve gone from wearing 18th century clothing to a rayon skirt and polyester blend top and my 18th century clothing was MUCH more comfortable.

In 1765, Stephen Hawtrey wrote a letter to his brother, Edward Hawtrey, who was preparing to come to Virginia. Stephen who had experienced the Virginia heat and writes, “Your cloathing [sic] in summer must be as thin and light as possible for the heat is beyond your conception . . . You must carry a stock of linen waistcoats [which were kind of like vests] made very large and loose that they may not stick to your hide when you perspire.”[4] Eighteenth century clothing was not a cure-all, as Stephen Hawtrey’s advice demonstrates. Weather-appropriate clothing had its successes, but the opportunity to “chill out” at home seemed to keep spirits up.

Other ways to keep cool 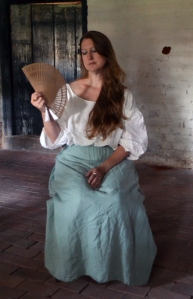 Woman in a shift and petticoat fans herself to stay cool in the cellar of Kenmore.

Gentry woman Sarah Fouace Nourse wrote in her diary about a particularly hot day. So hot, in fact, that after dinner and before tea she stayed in her breezy room and wore nothing but a shift [the most basic of women’s undergarments] and a petticoat [a skirt, probably of light fabric in this situation].  On even hotter days she would go into the basement for relief, where she could be found taking meals and working.[5]  In 1774, Landon Carter wrote that he wanted a bed for the passage for the summer months[6]

By the time of Mary, George, and Betty Washington, gentry houses had “passages” in which the members of the family could keep cool.  These spaces were more than just a hallway that ran from the front door to the back door. In the summer, they became a place to socialize and a respite from the heat.  William Lee wrote Carter, promising him “a line to repose on in a hot afternoon in ye cool passage;”[7] an enticing alternative indeed to the hot, humid, and sticky weather that makes up the Virginia Summer. 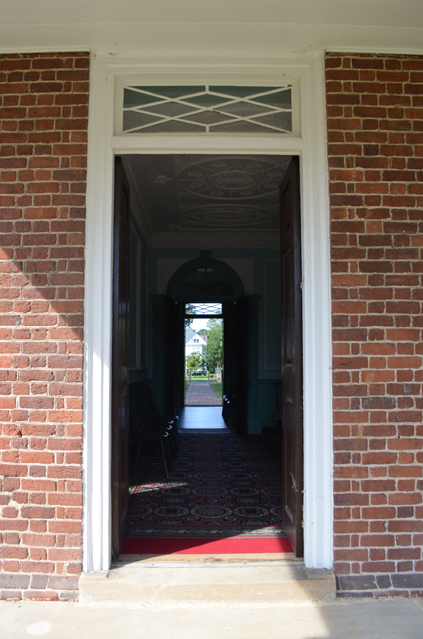 A view from Kenmore’s east portico into the dining room and all the way through the passage and out the house’s west entrance. All of these doors would be opened during hot weather to allow a cooling breeze into the house. 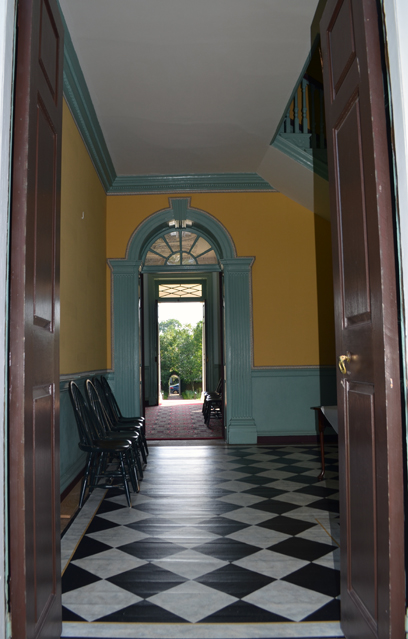 A view from Kenmore’s west front into the passage and all the way through the dining room and out the house’s east entrance.

They may have not had air conditioning but early Americans could call upon a variety of intuitive methods – keeping hydrated, wearing light clothing, and making lifestyle changes – to keep cool during the hot summer months.

[1] Small beer only contained 2%-4% alcohol. [n.d.]. Gwatkin’s Chorography of Virginia: “an account of the manners of the Virginians”