Another new piece of furniture has arrived at the Washington house at George Washington’s Ferry Farm! Introducing the “Old Desk,” as listed in the “Parlour” on Augustine Washington’s 1743 probate inventory.  This desk was copied from an original piece in the collections of the Colonial Williamsburg Foundation that dates to ca. 1710-1730, making it one of the earliest pieces represented in the house. So, why was it called the “old” desk in the inventory? And why are we now calling it “Mary’s desk?” And what are all those squiggly lines all over its surface? And does it have any secret compartments? Read on for the answers to these, and many other questions.

Augustine’s probate inventory doesn’t give us much description when it comes to the furnishings of his house, but what it does tell us can provide us with some interesting clues.  For instance, the furnishings of the parlor are almost all described as “old” – an old table, 3 old chairs, and the old desk.  Almost none of the furniture in the rest of the house is given this descriptor.  It would seem to indicate that the parlor was filled with furniture that was already considered old by 1743.

What do we consider “old” today? It can be a pretty broad category! For some of us, an object isn’t really old until it’s been around for hundreds of years.  On the other hand, folks living in California might consider a house built in the 1920s to be pretty old.  So what was considered old in the Washingtons’ day? Our best guess is that there was something about the furniture in the parlor that made the inventory takers think it was old – in other words, it looked different than the rest of the furniture in the house.  It was probably of a style that looked so different that it was immediately recognizable as being from an earlier era.

As we’ve previously discussed, in 1743 most colonists were becoming familiar with the Queen Anne style of furniture – a lighter, more graceful style, that emphasized curves and less embellishment.  Immediately preceding the Queen Anne was a style known as William and Mary, or early Baroque.  Early Baroque furniture was heavier, and emphasized intricate decoration like inlays, veneers, and carvings with an emphasis on dark woods.  Even to our modern eyes, William and Mary furniture looks very, very old.  We think that the Washington’s parlor was filled with William and Mary style furniture, giving the room a very different feel than the rest of the house.

The original desk chosen for reproduction is from the William and Mary time period, and shows all the hallmarks of that style – dark wood, intricate inlays and veneer on every surface.  The material used for all that veneer also explains those squiggly lines.  The wood used here is walnut, but more specifically it’s “burled” walnut.

Burled walnut isn’t a species, but rather a condition of the wood.  If you’ve ever seen an old tree with large, gnarled knots growing out of it, you’ve seen burled wood.  Those knots are caused by a fungus that invades the tree and causes the usual wood ring pattern to grow out of control.  Unfortunately, these gnarled knots of wood are very weak and can’t be used for any kind of structure, but they can be used for decorative purposes.  A woodworker can thinly slice the knots, producing material suitable for veneers that are covered in beautiful whirled patterns like what you see on the desk.

In addition to all the inlays and burled veneer, the desk does indeed feature some secret compartments.  This is everybody’s favorite part! In this post from three years ago, we discussed the importance of hidden compartments in 18th century furniture for keeping important documents or other valuables safe.  They were usually hidden within the structure of the desk, such as boxes built into the case of a piece and concealed by a false panel or floor, but they could also be spaces concealed by decorative elements of the piece, like carvings or architectural elements.

Our desk has a particularly sneaky hidden compartment in that it’s not what you think it is.  There is a panel in the center of the desktop that slides backward to reveal a large open compartment.  To our modern eyes, this must be it, right? The secret compartment! But no, it’s a fake out.  Our colonial ancestors would have recognized it as the storage compartment for the inkwells and stand necessary for proper letter writing – a fairly common feature of a formal writing desk at the time.

Desk showing the central compartment open. This space was for storing inkwells and a letter writing stand.

However, if you’ve gotten this far in an examination of Mary’s desk, then you’re pretty close to discovering the real secret compartment.  In fact, it’s revealed in the video below but, when you visit Ferry Farm, you should keep looking in the desk.  There are two more secrets hidden here!

And why do we call it “Mary’s desk” now? Well, that’s become a habit, but it’s one based in probability.  As our regular readers know, there are two desks in the Washington house – the small one that we’re discussing today, and the scrutore in the Hall, which we previously discussed here.  The scrutore is a very large piece of furniture, and was usually associated with shopkeepers or merchants, who often kept them in their back rooms to house account ledgers and financial papers.  The fall-front writing surface was intended to be used while standing, rather than while seated at a desk chair, and you can see by how high that it was positioned that was intended for persons of some stature.  Scrutores are generally associated with use by men, so in the Washington house, we tend to think of our scrutore as being “Augustine’s desk,” a place where he kept track of both his business accounts and matters related to the farm operation. 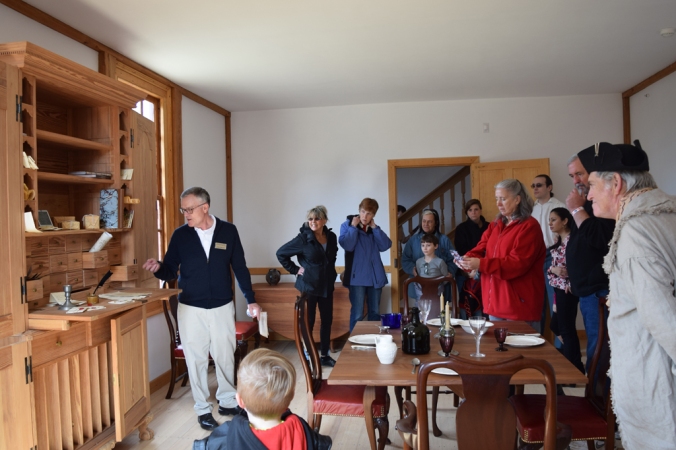 Interpreter Gary Haynes shows the scrutore to visitors touring the Hall of the Washington house.

The old desk, on the other hand, is very small – what furniture scholars call “diminutive” – and is of a style that is usually associated with use by women. Contrary to popular belief, women were often in charge of the complicated business arrangements and contracts related to the running of a household, and in Mary’s case, a farm operation after Augustine’s death.  So their desks were not simply for writing letters, but also for the storage and organization of all the associated papers and accounts needed to run their world.  Additionally, as the “keeper of the keys” in a colonial household, the mistress of the house might also store costly spices and foodstuffs in locked drawers within her desk, so that she could monitor their use.  Visitors to the Washington house will see that we have outfitted the old desk with all of the things Mary used on a daily basis, giving rise to the nickname “Mary’s desk.”

The desk showing a balance, mortar and pestle, spice pouches, letters, papers, quills, and all the necessities for an 18th century woman to manage the complicated business arrangements and contracts related to running of a household.

We hope you will stop in soon to see all of the new additions to the Washington house furnishings …and maybe figure out where Mary hid her secrets!  Ferry Farm and Historic Kenmore both open for the season this Friday, March 1. Click here to plan your visit.