Rodents are usually seen as one of a museum’s greatest enemies. They damage valuable artifacts and buildings, leave a mess wherever they go, and frighten unsuspecting visitors. Like most museums, Historic Kenmore does its best to make sure no pests make their home in the 18th century plantation house. But, before it became a museum in the early 20th century, Kenmore was not always rodent-free. 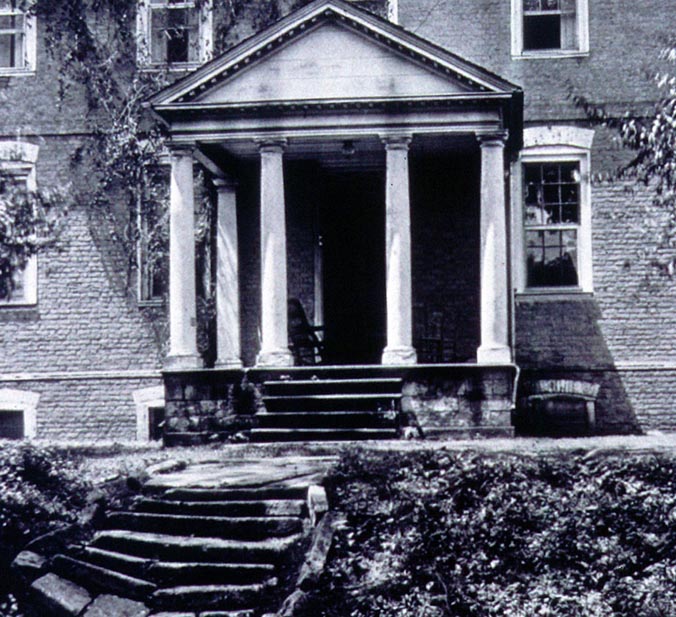 The east portico of Historic Kenmore shows some neglect to the house and its surroundings. The Howard family, who lived in Kenmore for a long period following the Civil War and was perhaps living in the house when our rodent of interest built its nest, invested a lot of money in refurbishing the house.

In 1989, archaeologists found a mouse or rat’s nest during an investigation of Kenmore’s walls and floors for architectural artifacts. In a recent video, our archeologists and curators carefully picked apart the nest found so long ago and made a cursory analysis of its parts.  This blog post delves more deeply into the history revealed by this rodent – Kenmore’s unlikely curator – and its nest.

The “indoor excavation” at Kenmore in 1989 provided present-day archaeologists at the Foundation a unique opportunity to study artifacts that rarely survive in the elements. Whatever rodent built this nest was a skilled architect in its own right, tightly weaving together bits of cloth, paper, and miscellaneous fluff from around the house to create a soft, structurally sound home of its own. The material came from dozens of sources, each giving insight to life at Kenmore in the late 1800s and early 1900s. 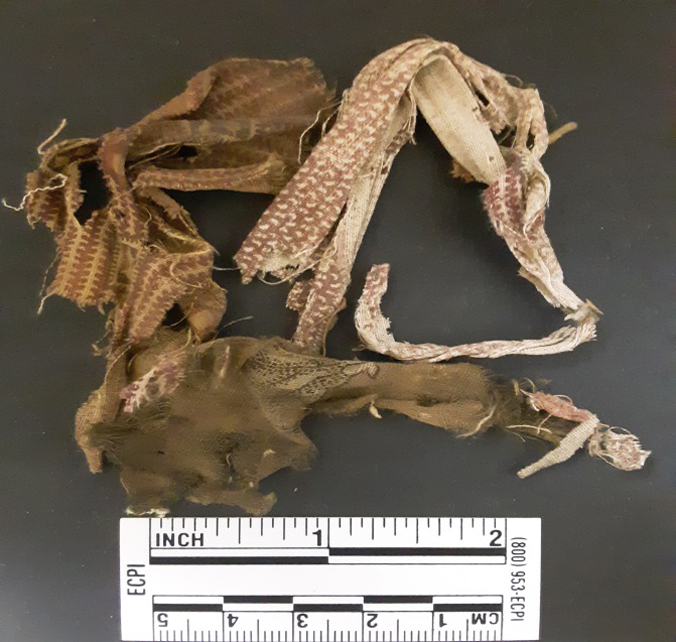 Patterned fabric from the nest

When it comes to fabrics, both the people living at Kenmore and the rodent had pretty good taste. While most of the cloth from the nest was a neutral white, beige, or brown, several scraps featured patterns popular from the late 19th through the early 20th century, like a red cloth with cream specks, and another with red and yellow flowers. Most of the cloth in the nest probably came from sheets, towels, or rags, but the few patterned scraps may have once been part of a dress or apron. A few threads are woven around a stiff, curved string, perhaps as part of an eyelet or fastener on a piece of clothing.  Other fibers came from webbing used in upholstering furniture. The rest of the threads, yarn, and fibers are too small to tell where they came from, but it’s clear that the resident rodent had plenty of textiles from which to choose.

A series of newspaper ads includes a date of September 6, 1877.

A scrap of a cartoon features an old man carrying what appears to be a baby.

A few other gnawings in the nest were less comfortable than threads and cloth. A bit of nutshell, wood splinters, tiny rib bones, and even two insect wings were part of the rodent’s eclectic collection. While these finds make up a small portion of the nest, it appears that the rodent had quite a literary bent. Over a hundred tiny scraps of paper lined the nest. About half of them were marked, while the others have print from books and newspapers. Some of the pieces are so small that not even an entire letter can be seen, but a few are large enough to make out some sentences, determine date of publication, or even identify the book from which the scrap came.

A section entitled “Recent Inventions” includes a convertible handbag and seat patented in 1915.

An advertisement on the opposite side of the newspaper discusses Christmas Savings funds from Farmers and Merchants State Bank.

One newspaper scrap advertises Christmas saving funds from the Farmer’s and Merchant’s State Bank. On the other side under “Recent Inventions,” Katherine Minehart’s “Combined Hand-bag and Seat” from 1915 is described. A much earlier bit of newspaper announces the opening of a store on September 6, 1877. The scrap from a book may be even older. The words on both sides are Christian lyrics, and were compiled into a book called Union Hymns by the American Sunday School Union. The book and several editions were published in 1835, 1845, and 1860.

Given the short lifespan of most rodents (around 1-7 years), it’s most likely that the nest builder lived in the early 20th century, and scampered off with bits and pieces of discarded old paper and fabric. Except for a few newspapers, this rodent tended to use items with a past. The absence of any plastic in the nest indicates that it probably wasn’t built much past the early 1900s.  Indeed, since the latest scrap found in the nest dated from 1915, the nest itself would have been built in that year or thereafter, just a few years before the house began its transformation into a museum focusing on the lives of 18th century patriots Betty and Fielding Lewis.

The stories of those who lived at Kenmore after the Civil War are not as detailed, but thanks to an unlikely curator, we are given a glimpse into the wardrobes and literary tastes of Kenmore’s late Victorian-era inhabitants.

In this video, we pick apart a rodent’s nest discovered by archaeologists investigating Historic Kenmore’s walls and floors for architectural artifacts. Like most museums, we take extensive pest prevention measures today but, back when it was an actual home, Kenmore was not always rodent-free. This nest revealed some fascinating history and told us a bit about Kenmore itself.