A few weeks ago at George Washington’s Ferry Farm, painters finished painting the exterior of the Washington house.  They used a red color known as “Spanish brown.” The paint is linseed oil-based and actually behaves more like a stain.  Modern oil-based paint can, in a way, be thought of as a plastic that laying atop the surface and coating the wood.  The historic pigment we used actually seeps into the wood itself and essentially stains the wood the deep red.

River-facing side of the Washington house at Ferry Farm.

Falling snow against the new paint on the Washington house.

In the 18th century, the pigment came from clay mixed with red lead, an iron oxide. The paint was “made by grinding the earth into a very fine powered consistency that would then be added to the linseed oil and turpentine – the content of the dirt and the amount used ultimately determined the color” which could range from “burnt orange through reds and into browns.”

Why did we choose Spanish brown as the Washington house’s exterior paint?  Well, we have evidence, both documentary and archaeologically, that suggests the original Washington home was this very color.

First, our archaeologists recovered fragments of plaster with Spanish brown on them, which demonstrates the color was available and used at Ferry Farm.

Second, Mason Locke Weems wrote “The house in which he lived is still to be seen. It lifts its low and modest front of faded red, over the turbid waters of the Rappahannock.” (Page 11)  While Weems included myths about Washington, his biography was published in 1800 meaning the house could certainly have still been standing for either him to visit or for persons who had seen the house to describe it too him.  We know the house became a ruin just after 1830.

Finally, when paint analysis of colonial houses is done, Spanish brown is frequently encountered.  The color was extremely popular during the 1700s.  Here in Virginia paint analysis found it used at William Randolph’s Tuckahoe and in Williamsburg at Nathaniel Walthoe’s storehouse, Bruton Parish Church, and, most notably, the Peyton Randolph House.[1] 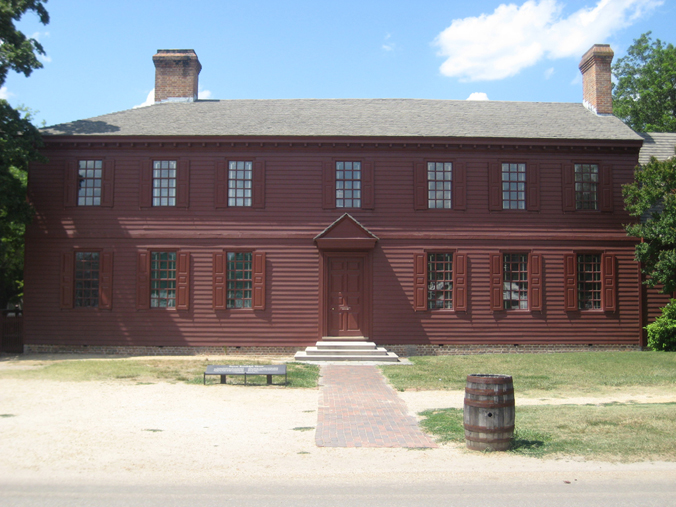 Spanish brown was also popular beyond Virginia.  It adorned the Palmer-Marsh House in North Carolina and Sotterley Plantation in Maryland.[2]  A survey of advertisements for Rhode Island paint shops between 1760 and 1819 found it offered “in nearly every ad.”

Spanish brown was “the ubiquitous color of colonial America” and “was cheap, probably the cheapest available – dirt cheap because it was dirt.”  Its inexpensiveness did not prevent it from being popular among the gentry class.  If possible, the Washingtons and their fellow gentry would have preferred homes of brick that symbolized “dominance, prosperity, and social status.” With this desire in mind, “red paint in its various shades can be seen as an attempt to give otherwise well-finished frame buildings the same aura of permanence that brickwork offered.”[3]

Painters recently finished painting the exterior of the Washington house at Ferry Farm.  The house was painted a red color common to the 18th century and known as “Spanish brown.”  The paint was linseed oil-based just as it would have been in the 1700s.  We’ll have a more detailed blog post in a few weeks explaining how we came to choose Spanish brown as the color to use.  In the meantime, here are a few photos of the painters working as well as of the finished job. 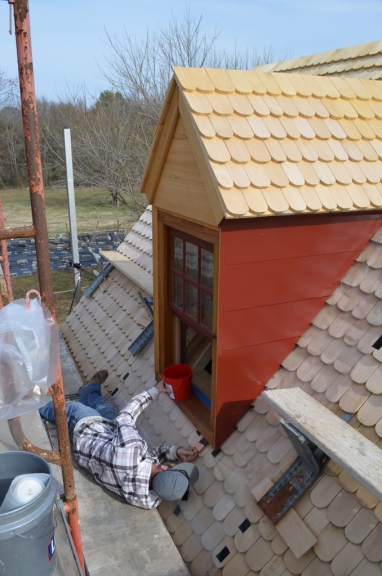 North and east side of house complete.

Falling snow against the new paint.