It isn’t known when the myths about the small white building called the Surveyor’s Shed at George Washington’s Ferry Farm began, or why it was believed by so many that the structure existed during George Washington’s childhood. It was long-held myth was that Augustine Washington taught his son, George, how to survey in this building but, in truth, the structure was built after the Civil War. As with many historic structures, the years have not been kind to the little frame building. Repairs and renovations over the years have periodically exposed its architectural secrets, revealing the true story of Ferry Farm’s oldest standing building. The collection of myths about this structure, referred to as the “Surveyor’s Shed” or “Surveyor’s Office” are of equal importance to its documented architectural history. Valuable oral histories from the people who once lived, worked, or visited at Ferry Farm include their own interpretations of the land on which George Washington spent his boyhood. Collected by Ferry Farm staff, these oral histories offer insights into the myth of the Surveyor’s Shed and give us clues as to why the story has remained so entrenched, regardless of the fact that the structure was built a century after George’s mother, Mary, left the property.

For decades, the Surveyor’s Shed was believed to be and indeed was introduced to visitors as George Washington’s first surveying office, where his father, Augustine, taught George how to survey. Having purchased the property years earlier, James B. Colbert built a large Victorian-style farm house at Ferry Farm in 1914. This farmhouse changed hands multiple times and was occupied for most of its existence. The house burned down on the morning of September 26, 1994. 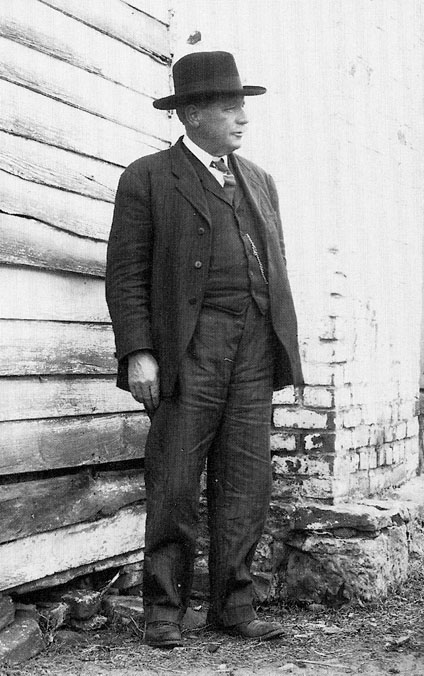 It is believed that Mr. Colbert began the Surveyor’s Office myth, since the building was not referred to by that name before Colbert owned the property. In Where the Cherry Tree Grew, Philip Levy, describes the relationship between J.B. Colbert and the Ferry Farm myths:

“Was it Colbert’s idea to serve up these stories in aid of his own ends, or were visitors bringing their beloved Washington tales with them? There is no way to know for sure,  but J.B. was orchestrating these stories- adding to them, accommodating them, making the most he could of them, and seeking ways to profit from them. He may not have set this Ferry Farm Weemsian renaissance in motion, but he certainly kept it rolling along and was its principal beneficiary.”[1]

In an oral history interview, Charles Linton, a later resident of the home, remembered that Belle Colbert — J.B.’s daughter — came to pay her respects once a year at the Surveyor’s Office.

The Linton family continued to share Ferry Farm’s most famous myths with visitors to the property during the 1940 and 50s. While the Linton’s lived at Ferry Farm, tourists were welcomed. Charles Linton recalled two or three guests showed up unexpectedly in a single day. The family kept a guestbook inside the Surveyor’s Office and greeted anyone who showed up to visit. When guests arrived, they were offered a tour that included the Surveyor’s Office and a cherry tree stump purported to be descended from the tree George cut down with his little hatchet. This stump was revered by visitors and treated as a shrine.  The Lintons never questioned the authenticity of the shrines.

A young boy stands proudly by the cherry tree stump. The rear of the Surveyor’s Shed is visible in the background.

Additionally, a trunk of a cherry tree was housed inside the Surveyor’s Office, and the Linton children cut off pieces of its bark to sell as souvenirs. Charles Linton remembered in his interview, that when one trunk was used up, he and his brother, Tayloe, crossed Kings Highway to cut down another cherry tree and sell parts of that trunk, as pieces were in such high demand.

Paul Millikan moved into the Colbert house with his wife and children in 1962. He recalled during an oral history interview that upon moving in, most of the downstairs of the home was used as a museum and the upstairs was the family’s living area. He also noted that the Surveyor’s Office had surveying equipment on display, although the equipment was not of the Washington’s era. Like the Lintons, Millikan did not immediately question the authenticity of the Surveyor’s Office at first. Over time, he began to question the possibility that the building was not of Washington’s time, but remained inspired by those who revered this land and its shrines as authentic Washington era relics.

The Surveyor’s Shed was officially listed as “George Washington’s First Surveying Office” in the Historic American Building Survey of 1935 but this listing was accompanied by a note stating that the claim was not supported with written proof.  In 1972, the Surveyor’s Shed was added to the National Register of Historic Places. Its nomination form (PDF) described the building as a 13’ x 12’ frame house sitting on loose stones, 20 feet to the south of where “George’s mother’s house stood”.  While the structure was referred to as “George Washington’s surveying shed” on the NHRP application, this document clearly stated the building was not of colonial origin.

In reality, the construction of the shed likely began when the Carson family owned Ferry Farm in the late 19th century; a full 100 years after Mary Washington left the property.  To build the structure, the Carsons used materials from other structures owned by the family on the property. Machine-cut lath in the original plaster walls and ceiling, the cut nails holding the structure together, and the platform framing are all evidence the building was constructed after 1870. The onslaught of the Civil War and the occupation of Ferry Farm by Union soldiers would have almost definitely caused major damage, if not complete destruction, of a small building like the shed if it had been standing pre-war. The war’s destruction was immense as evidenced by letters and photographs of Ferry Farm from the Civil War show a land denuded of trees or wood of any kind. Soldiers used every scrap of wood they could find to fuel fires for cooking keeping warm. 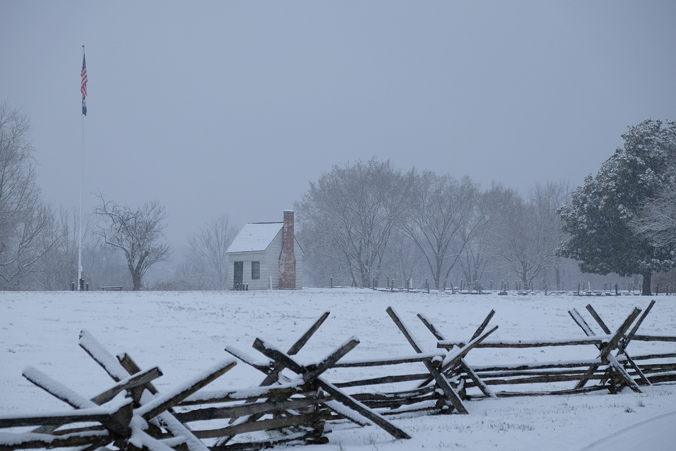 The Surveyor’s Shed in winter.

Nevertheless, the Surveyor’s Office was added to the National Register of Historic Places in 1972, and was again carefully recorded and repaired by historic preservationists after suffering damages from weathering, aging, and even wildlife.  Ferry Farm’s oldest building, while not from George Washington’s times, is still an important part of George’s boyhood home, and is considered an important American shrine by Fredericksburg locals. The myth of the structure being from the Washington era has been dispelled, but the little building is close to its sesquicentennial year as a symbol of the importance of the property it sits on. The myth behind the Surveyor’s Shed has become valuable in its own right, similar to the Cherry Tree Story. Both myths have affected the way we look at George Washington’s formative years. Had it not been for this little white building, and J.B. Colbert propagating these myths as facts, the narrative of the Surveyor’s Shed might not be as well-known, and Ferry Farm itself might not have been saved and protected as it is today.