Ferry Farm’s tens of thousands of years of human habitation has provided archaeologists with nearly 800,000 artifacts to date, consisting of discarded items left by the people who lived on, worked, or visited this land. A question we often receive from visitors is where are graves of the PEOPLE who left behind these discarded items?

Well, nearly all of the Washington family, who lived at Ferry Farm from 1738 to 1772, are buried elsewhere. George is in a burial vault at Mount Vernon, where he died 220 years ago.  If you are a Fredericksburg local, you likely know George’s mother Mary is buried on Washington Avenue near Kenmore, her daughter Betty’s home. Although he died at Ferry Farm, George’s father Augustine is buried at Pope’s Creek where George was born. A Washington family cemetery had already been established there years before. George’s brothers Samuel, John Augustine, and Charles and sister Betty are accounted for in various other cemeteries in both Virginia and West Virginia. 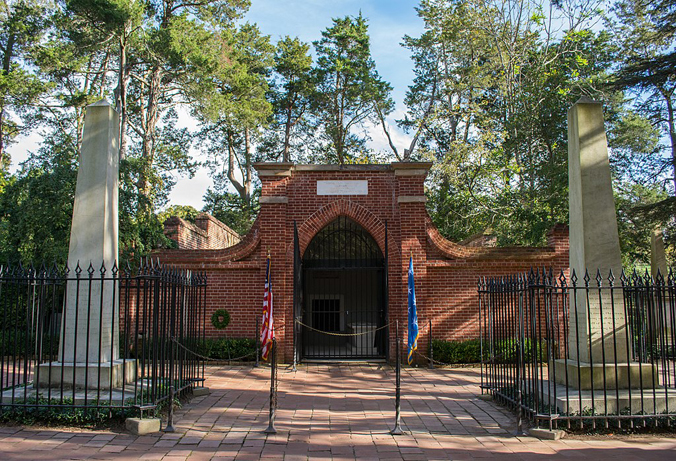 Mary, George’s mother, is buried near The Mary Washington Monument on Washington Avenue in Fredericksburg, Virginia.

So, are any Washington family members buried at Ferry Farm? The only Washington buried here is George’s youngest sister Mildred, who was born shortly after the family moved to Ferry Farm in 1738, and died at only 16 months old. Her cause of death is unclear, but the infant mortality rate in the 18th century was far higher then it is today.

The topic of burials at historic sites like Ferry Farm can be both exciting and panic-inducing for archaeologists. In general, we are pretty well-versed in identifying grave shafts long before we reach actual human remains and measures are always taken to know as much as possible about where we are going to dig before we actually initiate an excavation.

Human burials leave telltale signs when they are accidentally disturbed if you are paying attention. When soil is removed from the ground and then returned during the digging of a grave, the now mixed composition of the soil doesn’t look the same as the undisturbed soil surrounding it.

In any case, how to approach the care of a burial site is a serious subject and a legal subject too. In Virginia, if archaeologists discover human remains, a permit or court order is required to continue the excavation. Once permits are in place, forensic archaeologists who specialize in excavating human remains are called in. They must determine if the burial is old or new, and whether or not we may have stumbled into a possible crime scene. Usually (thank goodness), there is no crime scene but a whole new can of worms is opened in determining what to do next.

We don’t know exactly where the remains of Mildred Washington are located on the Ferry Farm property. All we have to locate the burial site is a survey of the property conducted by George himself in 1771, where he uses “the little gate by the tombstone” as his beginning reference point to lay the boundaries of what George called “the fields where my mother lives”. 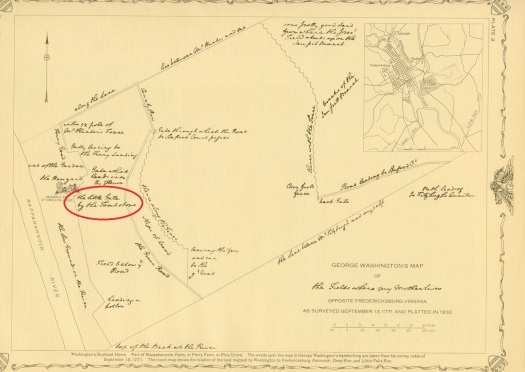 George Washington’s Map of “The Fields Where My Mother Lives” As Surveyed September 13, 1771 and Platted in 1932 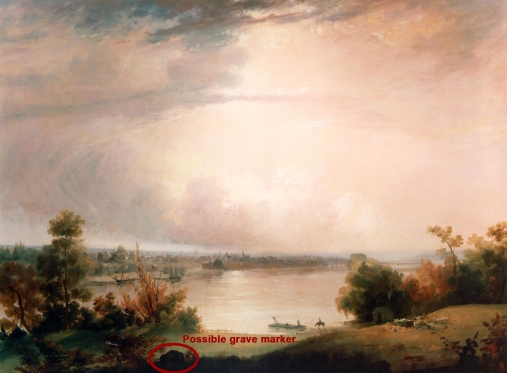 Along with the survey is an 1833 painting by John Gadsby Chapman of the Washington property facing the Rappahannock River that shows foundation stones where the Washington House stood and, in the approximate location of the grave on George’s survey, the silhouette of an object that resembles an arched headstone.

In 2009, we brought in experts to conduct a geoscientific study to assist in locating but not excavating the grave of Mildred. It would help the foundation planning effort if we knew where this important grave was located. William Hannah, Claude Petrone, John Imlay, and Dale Brown conducted non-destructive remote sensing surveys in and around the area identified in George’s 1771 survey. These remote sensing surveys included ground-penetrating radar (GPR), electromagnetic induction (EMI), and vertical magnetic-gradiometry. 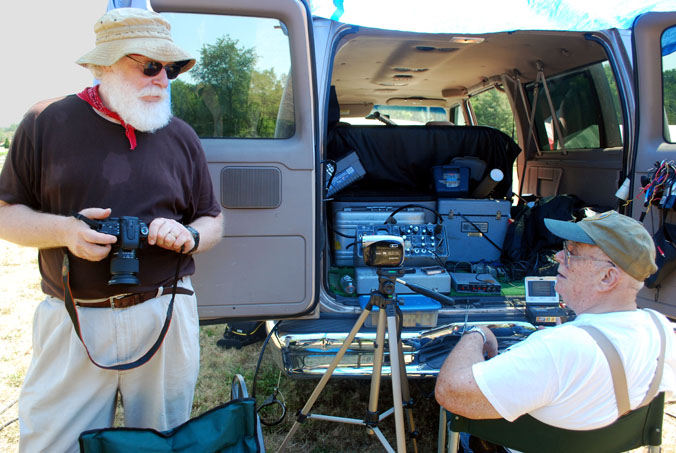 The researchers kept in mind that while finding Mildred’s grave was like searching for a needle in a haystack, there were some clues to hold onto while conducting the search. First, they considered the 1771 survey and the Chapman painting, and then they focused on the probable size of the grave. To prepare themselves for what kind of anomalies to look out for on their equipment, they looked at a modern growth chart for a 16 month old child. The composition of the container holding the body was also considered. It was determined the size of the anomaly should be around 29.25 to 33.25 inches in length, and though it had been 270 years, any iron elements such as coffin nails might be detected with these methods.

Ground-penetrating radar (GPR) uses electromagnetic radiation in the radio spectrum to reflect signals off of anomalies below the surface. In short, radar waves bounce off of objects of different densities in the ground, providing an image of differences in the surrounding area. You can see voids as well as objects. The image created comes back like this:

Electromagnetic induction (EMI) measures changes in electromagnetic fields, and the magnetic susceptibility of both metal and non-metal materials to provide a sub-surface image (below). The resulting image maps areas of more and less resistivity, revealing patterns and shapes that archaeologists can use to identify any possible features.

Once plotted on a map, there were a few areas in the expected region that had “grave-like” qualities based on the 2009 remote sensing survey. 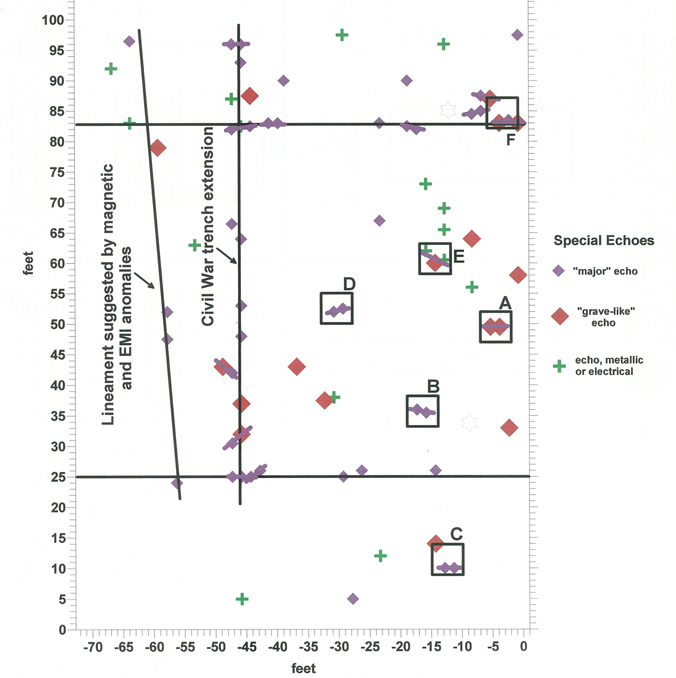 Armed with evidence from surveys old and new, we theorize that this area is the possible location of Mildred Washington’s grave. But without a full excavation, we can’t be certain if this is Mildred’s gravesite, or if this area even contains a grave at all. Conveniently shaped anomalies can throw off researchers, but these geophysical surveys provided useful evidence. There are indeed a few anomalies that are the right length, width, and depth of a grave for a young child. We have not conducted any ground-truthing, or surveys that involve coring or probing the ground, nor have we dared to move dirt in this area for fear of disturbing Mildred’s final resting place. The area remains undisturbed, even while the surrounding excavations and the construction of the replica Washington House took place from 2016 to 2018. Due to the destructive nature of archaeology, avoiding the grave site is best for now, and there are no plans to disturb or excavate the area.