Editor’s Note: Lives & Legacies continues to remember the Civil War as that conflict’s 150th anniversary concludes this April and May.  During the Civil War, the homes of George Washington and Fielding Lewis – both indispensable to securing American freedom in the Revolution — served as campsite and hospital in a bloody struggle over the definition of that same freedom.  This brief overview of Ferry Farm’s Civil War history is adapted from Report on the Excavation of the Washington Farm: The 2006 and 2007 Field Seasons by Dave Muraca, Paul Nasca and Phil Levy, Site No. 44ST-174, Department of Archaeology, George Washington Foundation, 2010, pg. 27-32.

On two separate campaigns in 1862, Union forces occupied the north bank of the Rappahannock River, including Ferry Farm, in an attempt to take control of Confederate Fredericksburg. The military objective of each campaign was the same; however, the circumstances under which the two were executed differed greatly.  The first occupation employed the Union Army’s strategy of ‘peaceful’ occupation while the second employed ‘hard war,’ resulting in a major impact on the social and physical landscape of the area.

In late April 1862, the Army of the Rappahannock, under the command of Major General Irvin McDowell, advanced south from Warrenton, Virginia. His military objective was to take control of Fredericksburg. This move was intended to help protect Washington, D.C., located 50 miles to the north, while the main body of the Union Army pushed toward Richmond on the James and York River peninsula. McDowell’s forward cavalry encountered, and quickly defeated, the Confederate forces defending Fredericksburg. In retreat, the Confederates burned the two foot-traffic bridges spanning the Rappahannock, as well as a vital railroad bridge. The Mayor of Fredericksburg surrendered the city to the Union Army.

The occupying Federals quickly established their encampments on the north side of the Rappahannock, including the land at Ferry Farm, and set about the task of erecting two floating bridges across the river and constructing a new railroad bridge. 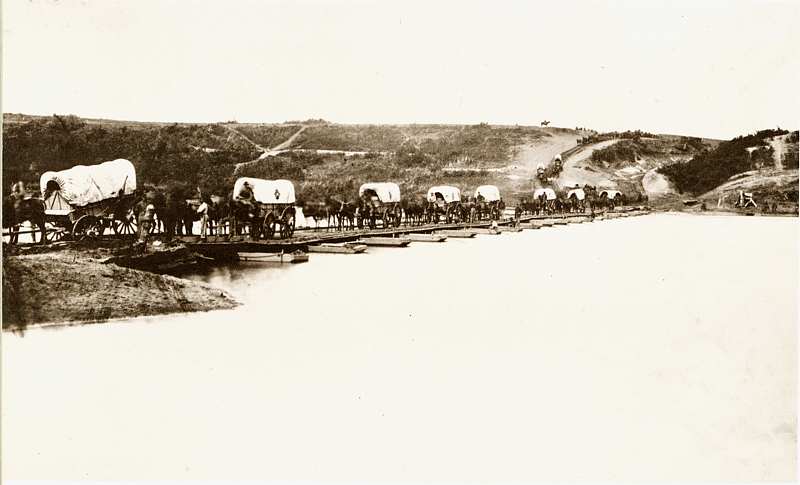 Union Army wagons cross the Rappahannock River on a floating pontoon bridge at Ferry Farm. This photograph was taken from the present-day City Dock on the Fredericksburg side of the river looking across to Ferry Farm.

The Union soldiers encamped at Ferry Farm were the muscle that enforced the occupation of Fredericksburg. Their officers ordered them to respect people and property, and the men – for the most part – followed their command. Still, local residents, like the overseer living at Ferry Farm, complained bitterly to Federal authorities about barnyards raided for livestock, hay stolen for bedding, and fences dismantled for firewood.

Federal regiments hailing from New York, Wisconsin, and Massachusetts passed the spring and summer at Ferry Farm performing drills pulling guard duty, and rebuilding the structures their fellow troops sometimes damaged. When off duty, the men had time to improve their camp, wash their clothes, write letters home, play games, and even go into town to shop and see the sights.

In August, newly-appointed Union General John Pope recalled Fredericksburg’s occupiers to defend Washington. Departing Union soldiers destroyed their pontoon bridges, the railroad bridge they had just finished rebuilding, and other new structures they feared would benefit the Confederates.  Apart from the superficial harm caused by their three-month encampment, they left behind a landscape largely intact with Ferry Farm’s buildings still standing.

Four months later, Union General Ambrose Burnside brought the largest number of Federal troops ever amassed to the north bank of the Rappahannock. His plan was to cross the river and march victoriously on to Richmond. But he delayed his army’s crossing waiting for pontoon boats. This gave General Robert E. Lee time to fully entrench his Army of Northern Virginia on the opposite side of the river. Burnside’s delay set the stage for a fierce battle, which devastated Fredericksburg and ended in a staggering Union defeat. Badly mauled, the Federals withdrew, pulled up their pontoon bridges, and hunkered down for the winter, turning Ferry Farm into part of their defensive front line.

Although the Washington family’s house had disappeared by 1830, our excavations of its location have revealed not only the Washington’s cellar but also a Civil War-era trench passing within inches of the cellar.

The massive Union Army that arrived for battle in November was far different from the modest occupying force that had spent the summer here. Battle-hardened and irritated by a string of defeats, these soldiers cared little for local concerns about property. Burnside’s men did not hesitate to take whatever they wanted, including trees, fences, livestock, and homes. Anything useful was commandeered, stripped clean, or torn down over the ensuing months to sustain the winter camp – including Ferry Farm’s buildings.

William F. Draper, of the 36th Massachusetts Infantry, recalls his experience at Ferry Farm in late-November, 1862. “Our picket duty here was especially interesting from the associations connected with the spot where that duty was performed. The part of the line that it usually fell to my lot to hold was on the old Washington Farm, where General Washington passed most of his earlier years, and where he cut the cherry tree with his little hatchet but could not tell a lie.”

Inkwell dating from the Civil War excavated at Ferry Farm.

Military action was renewed in the spring of 1863, culminating at the Battle of Chancellorsville. During this engagement, Ferry Farm was again the location of a pontoon bridge, and the Federal guns overlooking it roared back to life. At Chancellorsville, the Union Army would yet again sustain a crippling defeat; however, Fredericksburg would ultimately come under Federal control. In May 1864, the last of the military pontoon bridges to span the Rappahannock at Ferry Farm was in place, and would remain in this location following the Battle of Spotsylvania Courthouse.

After the war, attempts to restore peace and prosperity started with Ferry Farm’s first post-war occupants, the Carson family. They filled in trenches, cleaned up debris, and built a new farmstead that stood into the twentieth century.