George Washington Lewis was Fielding and Betty Lewis’s fourth son, being born on March 14, 1757.  His birth came within months of the deaths of two of his older brothers – Augustine and Warner, ages 4 and 1 – and was a bright spot in dark days for his parents.  He was named for his uncle George, who would have great influence on his nephew later in life.  Young George would also become a favorite of his uncle’s, too.

No known images of George Lewis exist. This photograph shows a bed and the desk he inherited from his parents and that both currently reside in the Bed Chamber at Historic Kenmore.

The earliest mentions of George in the Lewis family records concern his education.  In 1771, he and his younger brother Charles were sent away to school in New Jersey.  Thirteen-year-old George attended the College of New Jersey (now known as Princeton), while ten-year-old Charles went to a nearby grammar school.  The Lewis boys would be enrolled in New Jersey for the next three years, coming home to Fredericksburg on occasional school breaks.[1]  Whether it was his family relationship to the man who would lead the Continental Army during the Revolution or the strict anti-Anglican education he received in New Jersey, George Lewis would become the most militarily-involved of all of the Lewis children.

In November of 1775, George Washington asked that his wife, Martha, leave Mount Vernon and spend the winter with him at his encampment in Cambridge.  He was well aware that his nephew George (now eighteen years old) was interested in joining the cause, but Washington was reluctant to give any family members appointments in his army for fear of the appearance of favoritism.  In an attempt to give his eager nephew something to do, he asked the young man to accompany his wife on what would be a very arduous winter journey from Virginia to the encampment.  When George left his childhood home for Mount Vernon, he carried with him a letter from his father to General Washington, in which Fielding gave his blessing for his son to join the military, but hoped that the General could find some “little post that will bear his expenses”[2] for him, safely away from the fighting.  No doubt, this is what Washington originally hoped for, as well.  The reality of George Lewis’s military career would be far different.

Initially, George did serve as a secretary for his uncle after his arrival in Cambridge.  He must have proved himself trustworthy and capable, though, because in the spring his uncle suddenly reversed his position on commissioning relatives and made his nephew a First Lieutenant on March 12th, 1776, just two days before his 19th birthday.  Lt. Lewis was made second in command of a new cavalry unit, the Commander-in-Chief’s Guard.  In addition to performing as Washington’s personal couriers and escorts, the Guard was also responsible for his protection during battle.  Lt. Lewis would be in the vanguard of the surprise attack on Trenton, and later in the attack on his former stomping grounds at Princeton.  During the battle of Princeton, fellow Fredericksburger General Hugh Mercer was mortally wounded, and captured by the British.  Washington sent his nephew George under a flag of truce and carrying a letter to General Cornwallis, asking that the young man be allowed to tend to General Mercer in his final days.  Cornwallis relented, and Lt. Lewis spent the next few days providing comfort to the dying man.[3]

In 1777, Lt. Lewis was promoted to Captain in the Third Continental Dragoons.  He participated in the Philadelphia Campaign, wintered with the army at Valley Forge, and survived an encounter with the British 17th Light Dragoons at the disastrous Baylor’s Massacre, when most of the Third Dragoons were ambushed in a barn and slaughtered.[4] 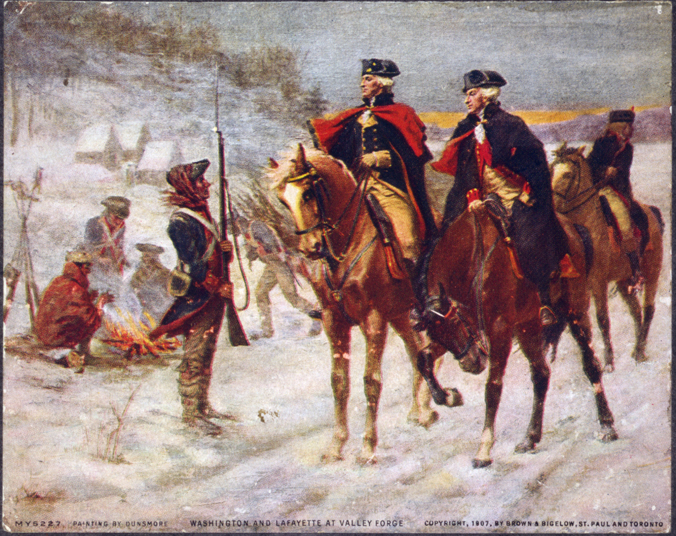 During the rebuilding of the Third Dragoons, the few officers who remained were assigned to Washington’s headquarters, where Capt. Lewis returned to the rather mundane activities of being Washington’s courier.  At some point during 1779, George met Colonel William Daingerfield, Commander of the Seventh Virginia Regiment of the Continental line, and his daughter Catherine.  George and Catherine fell in love, and apparently the relationship became a huge distraction for the young Captain, who was increasingly absent from camp.  General Washington wrote his nephew an angry rebuke in February, saying that his behavior reflected badly not only on himself but on Washington, too.[5]  Although George returned to his duties immediately after receiving the letter from his uncle, he would resign by September and marry Catherine.

George and Catherine settled near Berryville, Virginia, on land owned by Fielding Lewis that would eventually be George’s inheritance.  Although he became a planter, his military career wasn’t quite over.  In 1794, the Whiskey Rebellion in southwestern Pennsylvania broke out, and President Washington called on his trusted nephew to supplement the tiny standing army.  George raised a cavalry unit that he called the Fredericksburg Troop of Volunteers.  George was made a Major Commandant and his unit was deployed to Fort Pitt.

Finally, with the end of the Whiskey Rebellion, George Lewis took up a quiet life.  He and Catherine had three children, and eventually purchased the plantation Marmion, on Virginia’s Northern Neck outside of Fredericksburg.  Many of the original furnishings from Kenmore would be left to George, and would descend through his family at Marmion.  George continued to maintain a close friendship with Washington, who often asked for his advice on family and business matters.  When Washington died, he left his nephew a handsome inheritance, as well as his pick of Washington’s swords.

Marmion, the home of George Lewis and family, as it appeared in the mid-20th century. Library of Congress photo.

George Lewis died in 1821.  He and Catherine are thought to be buried at Willis Hill in Fredericksburg, the home of their son-in-law, Byrd Willis.