EDITOR’S NOTE: Sixty years ago today, the Soviet Union launched Sputnik, Earth’s first artificial satellite, into orbit.  It was an event with consequences, both great and small, that spanned the globe, even reaching Ferry Farm, once the boyhood home of George Washington, in Virginia. Today, we reshare this blog post about Ferry Farm’s Sputnik moment. 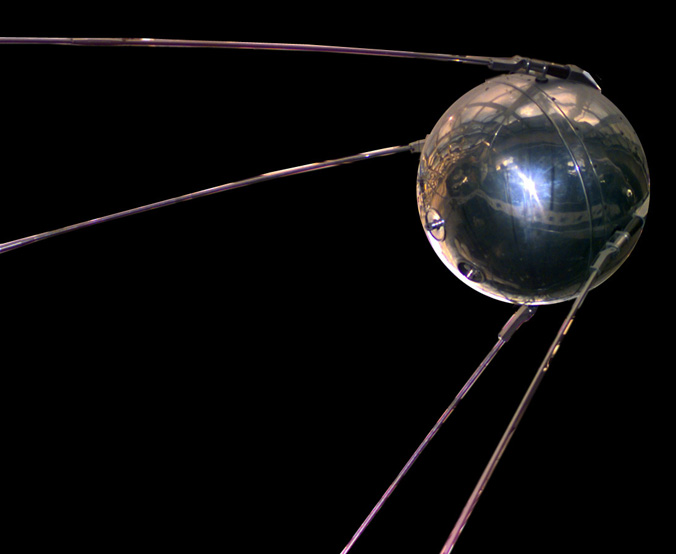 A replica of Sputnik at the National Air and Space Museum in Washington, DC. Credit: NASA/Wikipedia.

“Beep, Beep, Beep…” went the sinister telemetry signals from the Earth’s first artificial satellite.  Launched by the Soviet Union on October 4, 1957 — 59 years ago today — those irritating beeps, which can be heard below, provided undeniable evidence of the successful launch. It occurred during the Cold War between the Communist East and the Capitalist West, and represented the dawn of the space age. Embedded within Sputnik were two radio transmitters that, using a single watt of power, broadcast a series of beeps received by radios and televisions all over the world. These beeping sounds frightened some, who mistrusted the technological breakthrough and its potential military applications.

Uncle Sam is “Awake at Last” from his bed of complacency while Sputnik can be seen through the window hurtling across the sky transmitting it’s urgent ‘beep.’ Cartoon by Edwin Marcus. Credit: Library of Congress

Sputnik roused considerable political anxiety on the part the United States, a country determined to perfect satellite technology and to engage in cosmic exploration.  They underestimated the progress of the Soviet program. Today, in popular parlance, a “sputnik moment” refers to being spectacularly caught off guard by the unanticipated advancements of a rival. President Obama incorporated “Sputnik moment” in his 2011 State of the Union Address designed to encourage investment in research and technology.

At the height of the crisis in 1957, the Eisenhower administration referred to Sputnik as “…a silly bauble….” The satellite represented a rather modest accomplishment whose engineers prioritized being first in orbit over producing a sophisticated data-gathering tool. Recently, some scholars have suggested that the satellite was a bit of a ‘bluff’ to make the United States believe that the Soviet program was more sophisticated than it was.  Like many martial ‘bluffs,’ the impact was far-reaching and it exacerbated and escalated an already frigid Cold War.

About the size of a beach ball, Sputnik orbited less than 600 miles above earth. Each orbit lasted 96 minutes. The National Aeronautics and Space Administration (NASA) was created in 1958 as a response to this (perceived) technological “wake up” call. Nationally, efforts to strengthen primary school science education ensued and encouraged more students to seek technologically-oriented careers in service of a more robust space program.

In 2014, Ferry Farm archaeologists unearthed a tangible prize from this moment: a plastic toy “Sputnik” finger ring. Remember that Ferry Farm remained home to a variety of individuals and families in the centuries since the Washingtons lived there.  The flashy gold-colored ring, originally dispensed from a gumball machine, featured an idealized image of the satellite and the word “SPUTNIK.” It was no doubt cherished by its original owner, and envied by the prospective young space explorer’s friends.

A 3D image of the Sputnik ring.

As an archaeologist, the find confused me: why would toys commemorating Soviet satellites exist in the United States?  Who would buy this celebratory object for their child? For goodness sake this land had once been Washington’s home, first president of the definitely-not communist United States. I foremost saw the object through a politico-military lens, rather than as a space-age wonder for all people.

In popular American culture of the late 1950s, the surprise of Sputnik frequently was one of delight rather than apprehension. For some, those cosmic beeps were inspirational, promising future space travel and technological progress. From this new age of cosmic exploration emerged songs, dance, theatre, literature, and graphic art.

A generation of young Americans, enthralled by science fiction adventures of Buck Rogers and Flash Gordon, could not contain their excitement.  They were captivated by the real-life manifestation of their outer space fantasies. The launch excited children who dreamed of the day they might defend the earth against hostile invaders from space. Kids who spent their school days engaged in “duck and cover” drills ironically raced out to their back yard for a glimpse of the Soviet technology racing across the night sky. 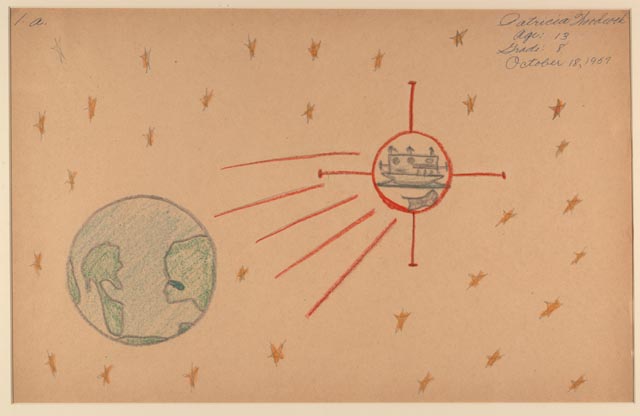 The satellite orbited the earth for three months, though its radio signals tactfully subsided after three weeks.  Sputnik’s orbit eroded 4 January 1958.  Its effects were as far reaching as they were long lasting.

The Sputnik launch garnered a diverse array of reactions nationally and internationally: pride, disquiet, excitement, imagination, and infinite inspiration. The rich variety of these responses led to the creation of a wide range of material culture – objects as small and inexpensive as a child’s toy ring and as massive an investment as the Kennedy Space Center. People created – and experienced – music, technology, literature, dance, and theatre that allowed them to understand this event in ways relevant to their own lives.   These responses reflect humankind’s desire to comprehend pivotal events that are beyond their control through personal agency.  Material culture – artifacts – gives us the capacity to participate in, to understand, and to ‘own,’ grand events that are larger than we are.

This was true in the past as well, as the assorted artifacts analyzed daily at Ferry Farm attest. Prehistoric ground stone tools were an astonishing advancement in their time: this technology allowed our ancestors to maximize the nutritional benefits of nuts, seeds, and grains, to fell trees that made dwellings more comfortable, and to toss spears farther and with greater force. Such scientific wonders no doubt inspired non-ground stone-producing peoples to invest in technological developments of their own.

Have a Sputnik moment! Let’s redefine the phrase to commemorate the boundless scientific and artistic creativity that the launch stimulated, rather than the political anxiety that emerged. Create a technologically- or arts-inspired marvel of your own! Don’t avoid sputnik moments… pursue them.  Show your support for World Space Week, which is held annually October 4-10. To learn more about this year’s events: http://www.worldspaceweek.org/