This is a Memorial Day story of a tiny hatchet excavated at George Washington’s Ferry Farm.  For such a diminutive object it speaks quite loudly to our local history in Fredericksburg, Virginia.  Initially, archaeologists at Ferry Farm assumed it was a pewter toy souvenir given out or sold in 1932, when our country and Fredericksburg celebrated the 200th anniversary of George’s birth.  Indeed, cheap pewter toys were very popular during the time period.

A closer look at the provenience, or the location on the Ferry Farm landscape, where the artifact was recovered paints a more complex picture.  Provenience is very important in archaeology because whatever is excavated around an artifact paints a more complete picture than one object all by itself.  A reexamination of all the artifacts from the context where the hatchet was found revealed that nothing from that strata (we excavate in layers) had any 20th century artifacts in it, nor did the two strata above it.  In fact, the youngest artifacts from these strata were all mid-19th century.  Additionally, although the archaeologists who excavated the hatchet didn’t know it at the time, the excavation unit from which the hatchet came sat right inside the Civil War-era trench that runs across the property. 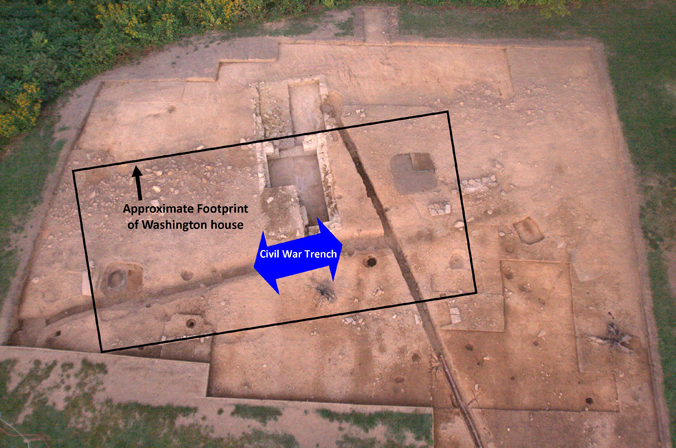 Excavated area containing the footprint of the 18th century Washington house at Ferry Farm showing a 19th century Civil War trench running the length of the house and beyond.

This revelation shut the door on our ‘it’s a 20th century souvenir’ narrative but opened the door to an even cooler one.  A close examination of the hatchet showed that it didn’t have mold seams, which are always present on cast pewter toys.  Furthermore, for some reason, it had one smooth side and one textured side leading us to believe that it was handmade, not machine cast.  This was supported by a thorough internet search to find an identical toy hatchet, which came up empty, further supporting our new theory that this piece was a one of a kind.  The textured side resembled the grain of wood so we surmised it had been cast in a simple hand carved wooden mold.  All of these clues, combined with its location within a Civil War trench, made us suspect that the hatchet was crafted by a soldier, possibly from a lead minie ball.  The hatchet is likely ‘trench art’.

Textured side of the lead hatchet. See photo at the start of post for at image of the smooth side.

Trench art is defined as objects either made by soldiers and POWs or by civilians using military items such as brass shell casings or lead bullets.  This simple lamp, owned by the author, was made using a 105 millimeter brass artillery shell casing.

Lamp fashioned from a portion of a 105 millimeter brass artillery shell casing.

To further support our identification of the hatchet as trench art, we took the artifact to the Virginia Department of Historic Resources where the amazing Katherine Ridgeway analyzed it using XRF or X-ray florescence analysis.  This non-destructive technique determines the composition of metal.  We also brought along a few minie balls recovered from the same unit for comparison.  It turned out that what we thought was a pewter hatchet was actually a lead hatchet with a similar compositional profile to minie balls, which are mostly lead with trace amounts of other metals such as tin and nickel.  While minie balls vary in their composition due to their imprecise method of manufacture, the hatchet was still a close match.

One can just imagine a bored Union soldier whittling the mold and then melting down some of his bullets to pour into it.  He likely chose the hatchet form because of the famous cherry tree story, in which young George Washington owned up to hacking his father’s cheery tree with a hatchet by proclaiming ‘I cannot tell a lie’.  The soldier would have been well-versed in the Washington cherry tree myth, which was set at Ferry Farm by Mason Locke Weems in his first biography of Washington, published in 1800. By the 1860s, the story was nationally known.  Additionally, letters Union soldiers wrote while encamped at Ferry Farm indicate they knew the site’s connection to Washington. They even went so far as to send home cherry seeds for their families.

While the identification of the hatchet is now secured, we have so many more questions.  Who was this soldier?  How many hatchets did he make and why did this one come to be left behind in his trench? Was it a souvenir for himself or did he send one home to his family or share with fellow soldiers?  Did he survive the war?  Unfortunately these are mysteries that will likely never be solved but that make for great pondering on this Memorial Day.