Title page of the First Folio, by William Shakespeare, with copper engraving of the author by Martin Droeshout. Credit: the Elizabethan Club and the Beinecke Rare Book & Manuscript Library, Yale University

While we’re planning and preparing Shakespeare on the Lawn in June, our first-ever Shakespeare Camp in July, and Shakespeare by Candlelight in August as Historic Kenmore’s contributions to this year’s many commemorations across the Commonwealth, we want to take a moment on this auspicious day to celebrate Shakespeare’s countless literary achievements!

To mark Shakespeare Day, we’ve decided to share some photos from last year’s Shakespeare on the Lawn performance of King Lear.

King Lear (Marcus Salley – center) decides to divide his kingdom among his three daughters but demands they declare how much they love him first. Goneril (Corinn Keene – far left) makes her disingenuous declaration. 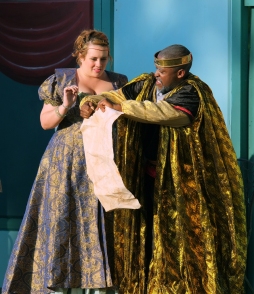 After her false declaration of love, Lear gives Regan (Amy Wolf) her portion of the kingdom.

Youngest daughter Cordelia (Rachel Sumaray) humbly and with true love states that she loves her father as a daughter should.

Lear banishes Cordelia from the kingdom while attendent (Roody Lablaze) looks on with disbelief.

The results of Lear’s decision are anger… 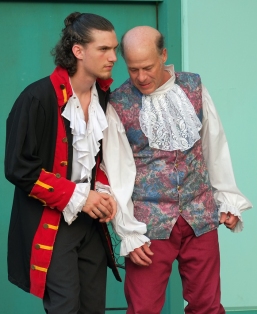 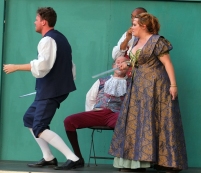 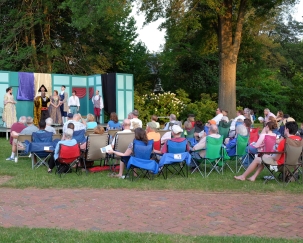 You can see an additional photo album of last year’s Shakespeare by Candlelight presentation of Cymbeline here as well as a collection of posters from a variety of other past performances here. Furthermore, read up on Shakespeare and theater history here, here, and here.

Finally, here is the text of the Governor’s proclamation:

WHEREAS, William Shakespeare, an English poet, playwright, and actor is widely regarded as one of the greatest writers in the English language and one of the world’s pre-eminent dramatists; and

WHEREAS, 2016 marks the 400th anniversary of William Shakespeare’s death and is an opportunity to celebrate his work and influence in English literature, film, poetry, and classics studies; and

WHEREAS, the Virginia Shakespeare Initiative (VSI) is a statewide celebration of William Shakespeare’s work, and will host more than a dozen events across the Commonwealth on April 23, 2016; and

WHEREAS, on this day, tourism councils, schools, college systems, libraries, and museums will open their doors to exhibits, activities, and celebrations focusing on the works of Shakespeare; and

WHEREAS, Virginians are encouraged to participate in Shakespeare Day;

NOW, THEREFORE, I, Terence R. McAuliffe, do hereby recognize April 23, 2016, as SHAKESPEARE DAY in our COMMONWEALTH OF VIRGINIA, and I call this observance to the attention of all our citizens.