Shakespeare on the Lawn at Kenmore returns this June with four performances of the popular drama, King Lear, performed by The Fredericksburg Players and directed by Fred Franklin.

King Lear is one of Shakespeare’s most heart-breaking tragedies—the story of a father who puts his faith in his two treacherous, elder daughters while casting out his youngest daughter, the only one that he truly loves. The play features conniving relatives and secret plots. It concludes with the deaths of the King’s advisor, all three of his daughters, and of course, Lear himself.

As Kenmore prepares for another summer of the Bard, Lives & Legacies shares a few posters from past theatrical performances at Kenmore. 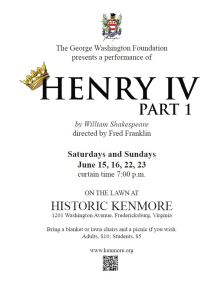 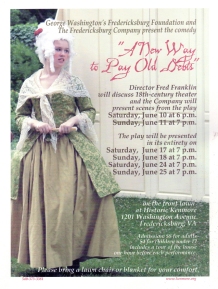 We occasionally present plays other than Shakespeare’s. Back in 2006, it was “A New Way to Pay Old Debts,” a satire popular in the 18th century.

Be sure to watch for forthcoming details about more summertime Shakespeare coming in August to Kenmore!