The goal of studying archaeological artifacts and, indeed, the goal of studying history more broadly is to understand the people who lived in the past both in the small moments and in the times of monumental change.  Something as ordinary as the beverages people drank and the objects from which they drank reveal what life was like in the past.  In this post, we examine three popular beverages, the vessels used to drink them, and their historical significance.

Tea: In the 18th century English speaking world, tea was synonymous with high society. Not only was the tea itself expensive (since it was shipped from across the globe) but the entire culture around tea was costly. One could not serve tea without a proper tea service or equipage. The first English references to tea come from early 17th century English merchants abroad in Asia. However, tea wouldn’t enjoy universal English adoration until later in the century when Charles II married Princess Catherine of Braganza of Portugal in 1662 and brought the practice from Europe into England. From then on, tea represented wealth and high society wherever the English went, including across the Atlantic. Over a hundred years later, however, Parliament inadvertently changed tea’s beloved status amongst their North American colonists as colonists boycotted the drink to show their displeasure with the mother country’s rule. Even with that change, tea remained a highly-prized status symbol among many and even inspired some Americans to create ‘Liberty Teas’ from locally grown herbs and fruits.

Like the tea itself, teawares (the vessels in which tea was prepared and served) were fashionable and reflected societal trends.   Well-to-do families like the Lewises of Historic Kenmore exhibited their finest teawares and were expected to update their china cabinet with the most stylish wares they could afford.  Silver topped the list followed by porcelain. If those were lacking, elaborately decorated and finely potted stone and earthenwares would do in a pinch.  At the end of the Revolution, Fielding and Betty Lewis were reeling from wartime expenses so their teawares likely resembled this lovely creamware piece with a delicate strawberry flower at the base of the handle.  While not the most expensive teaware at the time, this molded creamware exhibited good taste and was suitable for the Lewis family to use while serving tea to their guests.

Punch: Much like tea, punch was also a status symbol in the 18th century. A punch’s different ingredients usually came from all over the world and were therefore quite expensive. Punch is first written about by 17th century English sailors. The word ‘punch’ is believed to come from the Hindustani word ‘paanstch’, meaning ‘five’, and may explain why historic punches have 5 parts: sweet, sour, strong, weak, and spice. Typically, the sweet was sugar, the sour was a citrus fruit such as lemons, limes, or oranges, the weak was water or tea, the strong was alcohols like rum or whiskey, and the spices could be nutmeg or cinammon. These 5-parts allowed punch to be made from any number of ingredients and to take on unique identities and flavors. Punches varied greatly between taverns and recipes (receipts) were closely guarded secrets. What was not flexible was the necessity of punch. Colonials could hardly have an elegant ball, a large celebration, or even a small get-together without the ubiquitous drink.

As with tea, imbibing punch was a communal event requiring fancy equipage.  The bowls themselves ranged from elaborately decorated to elegantly simple and came in many sizes. The smallest served a single individual while grand bowls served lavish parties with dozens of tipplers.  Some bowls even conveyed political opinions or leveled jokes at members of society.  Suitable for a modest gathering of friends, this tin-glazed punch bowl displayed at Kenmore was owned by the family during their more prosperous pre-war days. By the time they moved to Kenmore, however, this cheerfully hand-painted bowl was falling out of fashion.  Tin-glaze was less refined than later wares and was easily chipped and cracked, making it less desirable.

Fortified wine:  In 18th century America, fortified wine reigned supreme.  Lacking our own wine industry, despite the best efforts of Thomas Jefferson and others to establish wine grapes in the colonies, we relied on imported wines from Europe.  Because of the ocean journey, fortified wines such as Madeira, port, and sherry became very popular.  These wines shared one thing in common:  The fermentation process was halted by the addition of brandy.   This upped the alcohol content considerably and made the wine portable over long distances.   Most wines prefer a quiet life in a cool environment.  Fortified varieties, however, thrive on chaos and age better when subjected to extremes of temperature, humidity, and constant sloshing around in the belly of a huge ship.  These choice wines even exhibited labels documenting their torturous journeys.  Wines that traveled south of the equator before eventually making their way up the coast to the colonies were especially prized.  Once a fortified wine found its way into a household, it was likely stored in an attic or on a portico, where it would continue to improve while battered by cold winters and sweltering heat.

Today, fortified wines are considered desert wines to be consumed after dinner.  The colonists, however, needed no such excuse to pop open a bottle of fine Madeira.  They did, however, traditionally drink these more potent wines from smaller glasses.    This lovely lead glass example is hand-blown and engraved using a copper wheel.  Probably manufactured in England in the late 1700s, one can only imagine the delicious wines it once held! 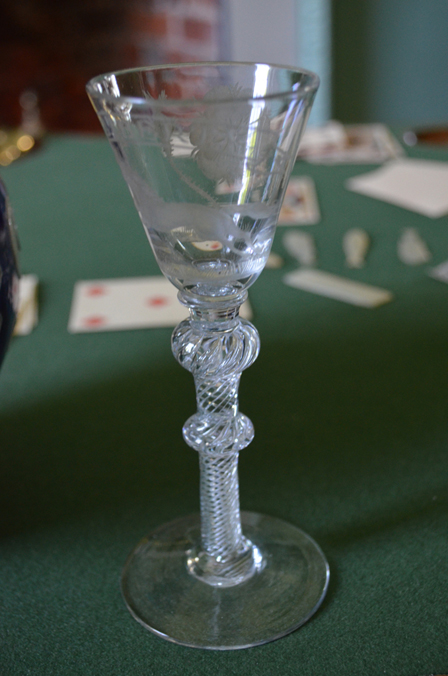