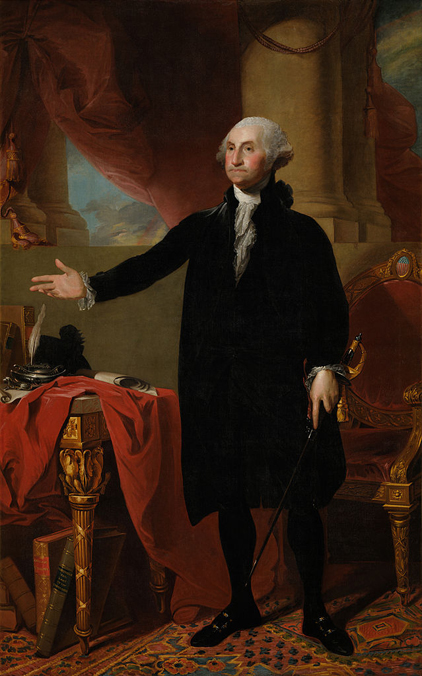 Editor’s Note: This is the second of two posts inspired by this year’s Summer Olympics. This week, Archaeologist Mara Kaktins reflects on the connection fencing has created between her family and George Washington. Read our first Olympics-inspired post here.

At our monthly blog meetings, post topics are floated and people grab them up, usually when it aligns with individual research interests.  George Washington as an avid fencer seemed an appropriate subject with the Summer Olympics in full swing this month.  I am no fencer, nor am I an athlete, so why write about fencing?  The spirit to volunteer for this assignment came to me because of the recent passing of my father.  He, my uncle, and my grandfather were all fencers.  It led me to ponder our first president, my grandfather, and the modern Olympic sport of fencing.

Let’s begin by examining the early history of fencing in the American colonies.  Long considered a ‘gentleman’s sport’, fencing was massively popular in Europe. Respect for the knowledge of sword play extended to the colonies, where masters from abroad set up schools to teach young men this ancient art.  These instructors did not just show their students how to fence.  Sword play was part of a larger artistic curriculum that could also include dancing, horseback riding, popular languages such as French, boxing, gentlemen’s games like cards, and knowledge of various musical instruments.   Fencing, or ‘short sword’ as it was sometimes called, was not seen as merely a sport.  It was referred to as an ‘art’.  With mastery, came not just dexterity, physical fitness, and strength but also good temperament, courtly manners, and a sense of restraint.  Teachers often emphasized that a gentleman well-versed in the sword was less likely to ever use one, having gained honor and discipline in addition to knowledge of a deadly weapon.  Sort of like the colonial equivalent of “With great power comes great responsibility”.

As a young man living at Ferry Farm, George Washington attempted to better himself learning all of the gentlemanly arts. It is no surprise he studied fencing.  Some evidence suggests that Lawrence Washington, his older half-brother who was a Captain in the Virginia Militia may have helped him in this regard.  Schooled in England, Lawrence learned all he needed to know of being a gentleman in the mother country, as was customary for gentry children.  George Washington never attended a real school, much less an English one.  He was determined, however, and sought his gentlemanly education where he could in Fredericksburg, Virginia. 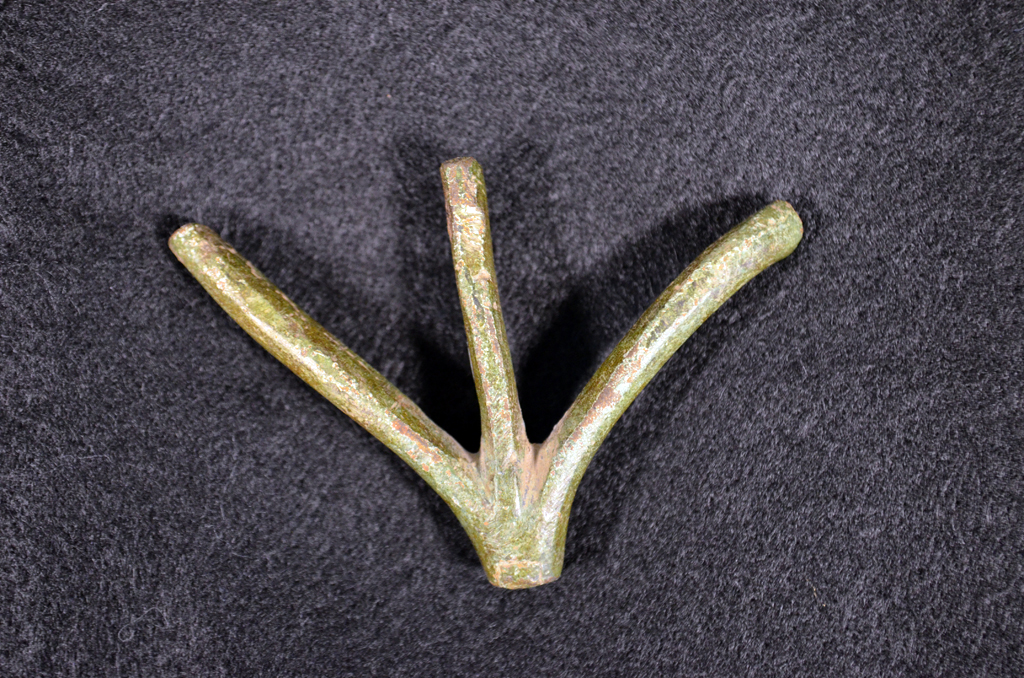 Fragment of a cooper-alloy hand guard from a sword dating to the late 1600s or early 1700s and unearthed by archaeologists at Ferry Farm.

The closest dedicated fencing instructor was in far-away Williamsburg so George had to make do. The early George Washington biographer, Washington Irving, suggested that Lawrence and his military friends along with an adjutant known only by his last name of Muse probably instructed George in sword play.  There was also a rather mysterious Dutch mercenary and translator, Jacob Van Braam (all good stories should have a shadowy Dutchman).  Temporarily located in Fredericksburg, Van Braam was in between wars and supplemented his income by teaching young George how to handle a blade.  They later campaigned together and fought at Fort Necessity in 1754 where a mistranslation by Van Braam may actually have contributed to the conflict that is credited with helping start the Seven Year War.  Presumably the Dutchman was more skilled with weapons than in French and George Washington went on to become a famous general, often depicted carrying a sword, a symbol of his status and military skill.  Van Braam later fought in the Revolutionary War but for the British before retiring to France.

Fencing foil belonging to the late Uldis Kaktins, my father.

Fast forward two centuries to a young man in Latvia named Zigurds, my grandfather.  Fencing remained a popular sport in Europe and a skill that educated men certainly looked to acquire.  Zigurds was tall, young, and handsome, had a law degree, and his father was a world famous opera singer.  Zigurds seemed to have a lot going for him and likely learned to fence for many of the reasons George did: physical prowess and a respected mental fortitude.  With the onset of the Second World War, Zigurds learned that the Soviets were going to deport him, his wife, and two young children to Siberia so he took his family and fled to the United States.  In America, his and his wife’s law degrees were worthless.  They moved into a rough but affordable neighborhood in Boston and worked blue collar jobs.  My grandfather’s life was completely different from what he had known in Latvia except for fencing.  He instructed fencing at the YMCA and headed a Latvian fencing club.  Normally a fairly stern figure, Zigurds once dressed as a ‘swashbuckler’ to be filmed fencing for a short film or commercial. 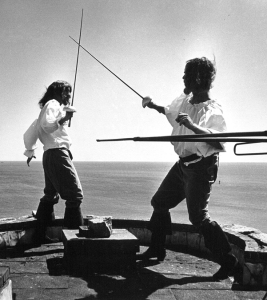 Zigurds Kaktins, my grandfather, (right) fencing in swashbuckler’s costume in the 1960s.

Zigurds passed on fencing to my father and uncle.  My recently deceased father always had a grace about him.  He carried himself easily and with confidence but was quick and nimble when needed.  Perhaps not coincidentally, he was also an excellent dancer.  I think that his early instruction in fencing contributed to this grace.  A man of grace and confidence, an excellent dancer, and a fencer.  These words prove an apt description of my father, my grandfather, and the Father of my Country.