We’re pretty interested in 18th century hairstyles, wigs, and wig-styling here at George Washington’s Ferry Farm and Historic Kenmore.  As evidence, check out our most viewed blog post. It’s about wig styling.  Our interest stems from the hundreds of wig curlers archaeologists have excavated during digs at Ferry Farm.  While those wig curlers were used to style men’s wigs here in British North America, our research explorations into hairstyling of the 1700s sometimes range more widely.  The information we find may have no direct relevance to George Washington and his family here in Fredericksburg but it still helps us to understand the world in which they lived.  Sometimes the information is simply too fascinating not to share here on Lives & Legacies and it’s all thanks to those little wig curlers that keep popping out of the ground where George Washington’s boyhood home once stood.

One of the most sensational wig and hair styles of the 18th century – the pouf – was found among the women courtiers of Louis XVI and Marie Antoinette in France across the Atlantic from Ferry Farm.  The pouf was a hairstyle that became popular in the French court during the late part of the eighteenth century.  The pouf utilized everything from wire, cloth, gauze, wigs, animal hair, and the wearer’s own hair to create a voluminous coiffure that could be used as a canvas to express feelings (pouf à la sentiment) or commemorate events (pouf à la circonstance).[1] 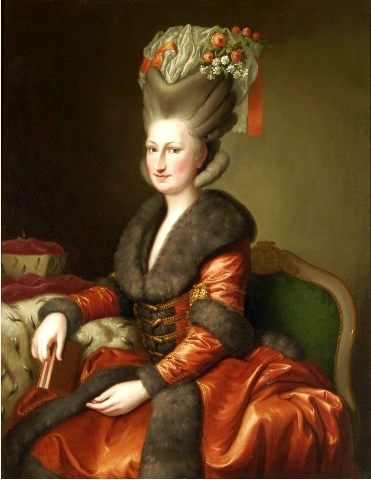 The pouf’s creation has been attributed to two people: Madame Rose Bertin and hairdresser Monsieur Léonard. [2]  Bertin had a shop in Paris, close to the Palace, where she and Léonard began offering these unique headdresses to the wealthy noble women of the court including Marie Antoinette.

One of the first women of court to commission such a headdress was the Duchess of Chartres in April 1774.  The Duchess wanted to commemorate the birth of her son so she had Léonard create a unique coiffure.  It featured “fourteen yards of gauze and numerous plumes waving at the top of a tower…two waxen figures as ornaments, representing her son in his nurse’s arms.  Beside was placed a parrot pecking at a plate of cherries, and reclining at the nurse’s feet, a waxen figure of a little African boy of whom the duchess was very fond.  On different parts of the hairpieces were the initials of Duke of Chartres, of Penthievre, and of Orleans, formed with the hair of those princes – the husband, father, and father-in-law of the duchess.”[3]  The poufs popularity took off after the Duchess premiered this flamboyant bouffant and it became a must have fashion accessory for all aristocratic and wealthy ladies of France.

The Duchess of Lauzun hired Bertin to decorate her locks as bemused contemporary journalists reported with– “a stormy sea, a hunter shooting at ducks, a mill where a female mill worker was being seduced by a priest, and at the bottom, the mill-worker’s husband walking along with his donkey.” [4]

Young Marie Antoinette, France’s new queen, became the leader of all things fashionable in pouf décor.  One of her most written about headpieces was the “coiffure à l’Iphigénie” which was wound with black mourning ribbons, trimmed with a black veil, adorned with a wreath of black flowers and topped with a crescent moon.  She wore this on a night at the opera to support a friend Christoph Gluck and his Parisian debut of “Iphigénie en Aulide.”[5] 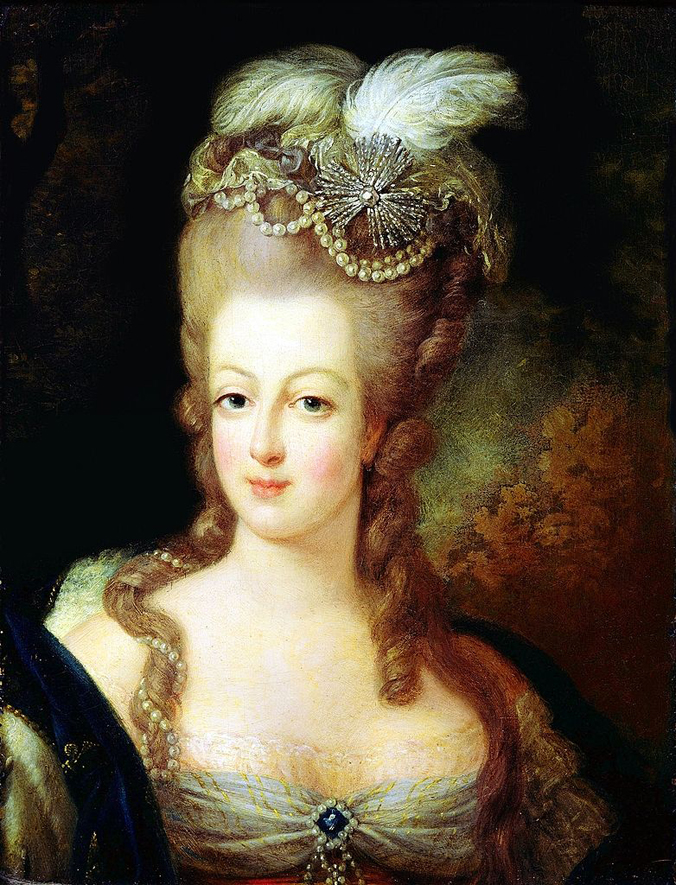 Ever at the cutting edge not only in fashion but in medicine, she unveiled “pouf à la inoculation” to celebrate her husband’s recent small pox vaccination.  This pouf included a serpent belonging to the Greek’s god of medicine, Aesculapius, twined around an olive tree that symbolized wisdom with a great golden sun rising behind it as a nod to her husband’s grandfather Louis XIV, the much-loved Sun King.

Two other noted examples that caused a stir in the court were the Zephyr and the Coiffure a la Belle-Poule.  The Zephyr, created by Monsieur Léonard, was a moving garden of brightly colored flowers which was celebrated as a peak achievement for the hairdresser.  The Coiffure a la Belle-Poule was a nautical pouf that consisted of a ship sailing on a sea of thick wavy hair.  It was invented after the naval battle in which the frigate La Belle Poule was victorious.

Soon these new hairdos began to make their way out of the circles of aristocracy to the streets of Paris.  However, as cutting-edge fashion makes its way out into the streets, the distinctiveness is somewhat diluted creating more audacious and ostentatious copycats.  This was quickly picked up on by social critics and became a fertile subject for mockery and satire.

One critic lampooned the imitators saying, “they did not hesitate to embrace styles more ridiculous than sublime.  Thus spotting in the Queen’s pouf a la jardinière such implausible ingredients as an artichoke, a carrot, some radishes, and a head of cabbage.” [6] Another complained, “Frivolous women covered their heads with butterflies” and “Melancholic women went so far as to put crematory urns in their headdress.”  Even the hair dresser who invented the pouf began to decry the “prodigious folly of composite and fabricated coiffures, as pictures of towns, little models of Paris, a globe or the heavens.” 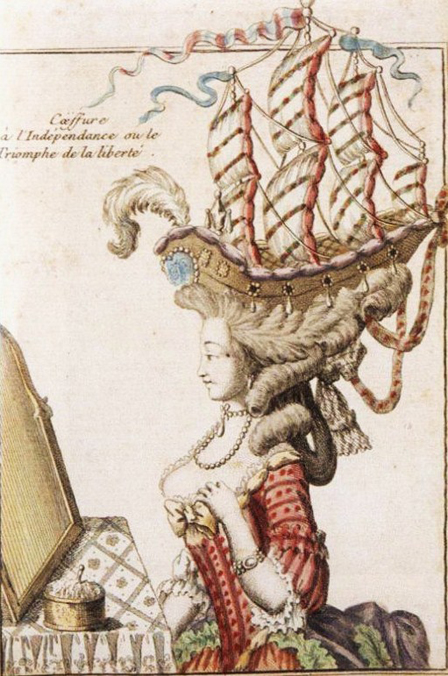 Some complaints seemed more valid than others.  Spectators at the Paris Opera petitioned the director, to refuse any lady whose coiffure blocked the view of the rest of the audience.    While enjoying the theatre might inconvenience others, getting to the theatre brought its own set of physical dilemmas for the pouf wearer.  Try squeezing a three foot bouffant into a small covered carriage or navigating a standard doorway with the additional height.

Luckily, for those who found the pouf a public nuisance, a silly fashion fad, or just a physical pain to wear did not have to wait long for it to fall out of favor spectacularly.  The huge grandiose styles began to represent a symbol of aristocratic excess in a society on the verge of political revolution.  It embodied the nobility’s unbridled lavishness in the face of public discontent.  This willful ignorance didn’t end well for the coiffured-court ladies who soon found they no longer had anywhere to put their elaborate headdresses.