It’s probably the myth that is more enduring and widespread than any other about George Washington.  At some point from someone, you have heard that George Washington’s false teeth were made of wood.  It is not true.  In reality, his dentures and dental tribulations were more complex than the familiar myth says.  The true story, even when it is uncertain, reveals much more about his life and about life in general in the 18th century.

George Washington by Gilbert Stuart (1798). Washington’s dental troubles are even apparent on his face. As the result of his dentures, he kept his mouth closed tightly and the false teeth caused the area around his lips, his lower jaw, and his chin to protrude slightly. Credit: Clark Art Institute

George Washington had a tooth pulled for the first time in 1756 at the age of 24.  Four years later, George Mercer described Washington’s appearance in a letter, saying “His mouth is large and generally firmly closed, but which from time to time discloses some defective teeth.”   By the time of his first inauguration as president in 1789, George had only one tooth left.

The causes of George’s dental problems will never be known with certainty.  According to John Adams, Washington himself “attributed his misfortune to cracking of Walnuts in his Youth.”  Furthermore, Adams hints at one additional potential factor: the common use of mercury in medicine during the 18th century.  Adams described how his doctors gave him sizable quantities of mercury when he was inoculated for smallpox.  The result was, he said, “that every tooth in my head became so loose that I believe I could have pulled them all with my Thumb and finger.”  Adams complained that his doctors “rendered me incapable  …of speaking or eating in my old Age, in short they brought me into the same Situation with my Friend Washington.” 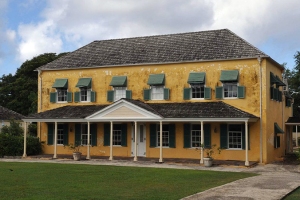 Home of Captain Croftan where Washington lived during the several months he visited Barbados in 1751. Credit: Wikipedia / Jerry E. and Roy Klotz

For what it’s worth, nineteen-year-old Washington contracted smallpox in November 1751 during a stay in Barbados.  Constantly attended by Dr. John Lanahan, he was sick for 25 days before finally fighting off the deadly disease.  We have no records to tell us precisely how Lanahan treated Washington.  If we consult pages 28-29 of A Rational and Mechanical Essay on the Small Pox published in 1735 by Dr. William Hillary, we find a three-phase course of treatment for pox sufferers. “The first, by bleeding in the first Stations of the Disease; when the Fever is violent: The second by introducing the Practice of Purging, (and Bleeding) in the most dangerous Circumstances attending the second Fever.”  The third phase was employing all known methods to reduce inflammation.  All phases were typical medical practice at the time.

The purging phase of smallpox treatment is when mercury may have become involved.  The most popular concoction to induce purging in the 18th century was called calomel.  It “was a white tasteless powder which consisted of mercury chloride. When taken in small doses calomel led to the evacuation of the bowels.  If taken over time or in heavier doses, calomel induced heavy salivation, bleeding gums, mouth sores, tooth loss.”  Again, in describing his own brush with smallpox, John Adams noted that his doctors “salivated me to such a degree” with “Milk and Mercury” that all his teeth became terribly loose.

Young Washington survived his smallpox attack but literally carried the scars of the illness for life.  Back at Ferry Farm in January 1752, Mary Washington twice purchased some ointment from Dr. Sunderland (Sutherland?) to deal with George’s pox-caused facial scars.  The same bill also included a “mercurial purging” for someone. [1]  We should not definitively conclude that medicinal mercury caused George’s life-long dental troubles.  Like most things in history, his difficulties probably had a mix of causes common to the 1700s, including diseases and  “ poorly balanced diet . . . as well as genetics.”

Regardless of the reasons for George’s defective teeth, Washington ultimately proved “very wise about the message an image can send, and knew that . . . he had to look the part of a leader… which meant at least having teeth.” 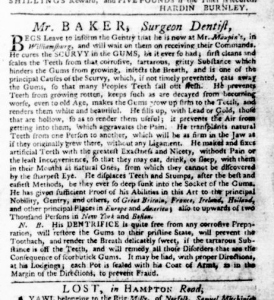 John Baker advertised his services as a Surgeon Dentist in the January 2, 1772 edition of the Virginia Gazette.

Accordingly, as he lost more teeth, George replaced them with partial dentures and then eventually full dentures.  Surgeon Dentist John Baker, who we first wrote about here, became George’s regular dentist in 1772.  Baker stayed at Mount Vernon in October 1773 and received two substantial payments of £8 total from Washington that same month.  Baker was the first to make false teeth for George, creating a partial denture of ivory for wiring to his natural teeth.

The tooth loss continued, however.  In 1783,Washington asked Baker “for some of the Plaister of Paris, or that white powder with which you take (in wax) the Model of the Mouth for your false teeth—and directions how to mix, & make use of it—When you have done this, I can then give you such a Model as will enable you to furnish me with what I want.”  It seems it was time for another new set of dentures.

A month later, though, Washington took on a new dentist: Jean-Pierre Le Mayuer, who probably made him another partial denture.  Additionally, Le Mayuer practiced the relatively common 18th century dental technique of transplanting, in his words, “good living teeth in the Room of those which were broken or otherwise decayed.”  At first, Washington seemed skeptical about the practice.  He needed to replace his teeth but “(not by transplantation, for of this I have no idea, even with young people, and sure I am it cannot succeed with old).”  Eventually, his mind seemed to be changed somewhat by Richard Varick’s testimony of Le Mayuer’s skills.  That said, there’s little recorded describing the care Le Mayuer provided Washington.

Despite George’s skepticism, Le Mayeur’s use of human teeth in his practice was not unusual for the time. A patient’s own pulled teeth might be used in their dentures.  Teeth from other people, especially the poor and enslaved, were bought and even harvested from the dead for use in dentures or transplanting.  In fact, “Wherever Dr. Le Mayuer practiced, he sought out through newspaper ads ‘Persons who are willing to dispose of their Front Teeth.’  While in New York, he advertised that he would pay two guineas each for good front teeth; in Richmond, he stipulated ‘slaves excepted.’”  Did this mean Le Mayeur would not pay for teeth from slaves or is it a Frenchman’s corruption of the word “accepted”?  It seems, in fact, he was willing to pay for the teeth of enslaved people for, in May 1784, Lund Washington, who was managing Mount Vernon while George commanded the Continental Army, recorded just over £6 “cash pd Negroes for 9 Teeth on Acct of Dr. Lemoire.”

Washington definitely used human teeth in his dentures but we do not know if they were teeth from slaves.  He probably did use his own in some dentures.  Back in 1782, when John Baker was still his dentist, George wrote to Lund Washington instructing him that “In a drawer, in the Locker of the Desk which stands in my Study, you will find two small (fore) teeth; which I beg of you to wrap up carefully, & send inclosed in your next Letter to me. I am positive I left them there, or in the secret drawer in the locker of the same desk.”  It is believed “Washington hoped that these original teeth could be used within new dentures that were being fitted for his use.” 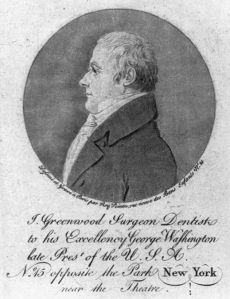 “The only complete set of Washington’s dentures that still survives . . . is made of animal and human teeth, lead, and ivory.”  John Greenwood, who served as Washington’s dentist throughout the 1790s, made them out of hippopotamus ivory, horse or donkey teeth, human teeth, gold wire springs, brass screws, and lead.  Greenwood left a gap in this set for the one remaining tooth Washington had left.  Inevitably, that tooth finally had to be pulled and Washington presented Greenwood with this tooth as a gift, which hung on his watch chain inside a glass locket.

George Washington suffered a lifetime of dental troubles.  The causes of those troubles and the attempted solutions were typical of the 18th century and teach us much about both Washington’s life and the lives of his fellow early Americans. The real story of Washington’s false teeth, even when uncertain, reveals more about his life and his times than any stale wooden myth.