George Washington’s Ferry Farm is busy reconstructing the Washington House and, behind the scenes, we are equally busy creating educational and interpretive activities to take place inside and outside the house.  One common colonial chore you may eventually see being done outside the house is laundry.  While doing laundry is still part of our routines, the way we do it today looks a lot different from methods used a few hundred years ago.

To begin with, in the past, most households had to make their own soap.  I’m not talking about lavender-infused goat’s milk soap with rosehip essential oils and colloidal oatmeal exfoliant.  I’m referring to a very basic soap composed of animal or vegetal fats combined with lye water.  The end result was considered a success if it removed dirt without burning your skin off.  Consequently, we figured it would be a good idea if we made some soap, just to get an idea of how it is done.

For our soap making experiment, we needed two basic ingredients: lye and animal fat. Fortunately, I raise pigs and had plenty of lard to contribute to the effort so we already had our first ingredient.  Soap making was often a fall or early winter activity as this corresponded with the butchering of pigs and cows.  Alternatively, a household could save up their old cooking grease to turn into soap (yum).  The lye, our second ingredient, was easy to obtain….online!  I did briefly look into making our own lye and quickly realized this was a task far too time consuming.

Colonists, however, not having the benefit of Amazon, wouldn’t have had a choice.  To make lye, they began with a hopper filled with many fires worth of hardwood ashes.  After enough ashes were secured, water would be filtered through it and collected below.  The resulting liquid was boiled down to create the correct concentration, which involved a lot of guess work.  If the lye was too weak it would not react enough with the fats to create soap.  If it was too strong, the soap would impart nasty chemical burns.  Colonial soap making involved quite a lot of effort.

Along with purchasing the lye online, we took yet another shortcut and used crockpots instead of a fire.  This way we could regulate the temperature and keep it steady.  Imagine standing in front of a hot fire and stirring a pot of caustic lye and smelly animal fat for hours and hours? No, thank you, I’ll use the crockpot!

Our first step was to melt the lard in the pot and then slowly add in the lye water.  The resulting chemical reaction was quite interesting.  Initially, the clear lard turned a creamy caramel color before it thinned into the consistency of melted butter.  Then it began to turn darker and separate into what can only be described as an ‘applesauce’ texture.  After what seemed like an eternity of stirring, the mixture progressed into a ‘mashed potato’ phase (hungry yet?).  This fluffy concoction was transferred to a mold and left to set up for a few days.

Our helpful instructor taught us the ‘zap’ test to roughly determine the pH of the soap, which was also a technique used by colonials.  This involves touching the tip of your tongue to the soap.  If you get a strong taste or ‘zap’, it means the pH is off, the soap is too alkaline, and could irritate your skin.  If you taste nothing or only get a slight zap, it’s safe and good soap.  After much soap licking, it was determined that we had indeed produced legitimate soap.  This conclusion was further supported by our crockpots filling up with happy suds when we rinsed them with water.

The photo on the left shows the newly made soap cooling in a parchment paper-covered wooden mold while the photo on the right shows suds in a slow cooker. Credit: Elisa Gale 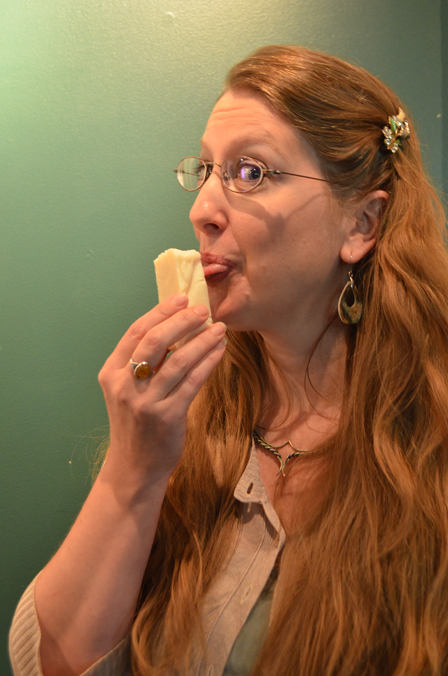 If you were a colonist, making soap is where doing your laundry started.  It took months of preparation just to make soap, a product so cheap, easily obtainable, and ubiquitous in today’s society that we rarely give it a second thought.  If you’re interested in learning more about how soap was made come to Ferry Farm this Fourth of July where there will be a traditional soap making demonstration!