As Meghan talked about in her latest blog post, we are currently taking on the immense task of finding accurate and well-made reproduction furnishings and household items for the reconstructed Washington house at George Washington’s Ferry Farm.  We recently completed two successful shopping expeditions and acquired an array of items for the home from earthenware tankards to creamware cups and saucers.  While, many of these pieces will be familiar to anyone who loves to pick through local antique stores, there are some unique items whose names and purposes are might not be that familiar to the modern person.

The first two items, a bourdaloue and wick trimmers, were purchased at auction in Richmond.  The auction sold props used on the AMC show “Turn: Washington’s Spies” which wrapped filming this year after four seasons.  “Turn” takes place from 1776 to 1781 and follows a farmer and his childhood friends as they form a group of spies called the Culper Ring.  The show used many good reproductions of everyday 18th century objects and the auction proved an excellent resource for items to use in the house at Ferry Farm.  The third item, a demijohn, was found at an antique store on Virginia’s Northern Neck. 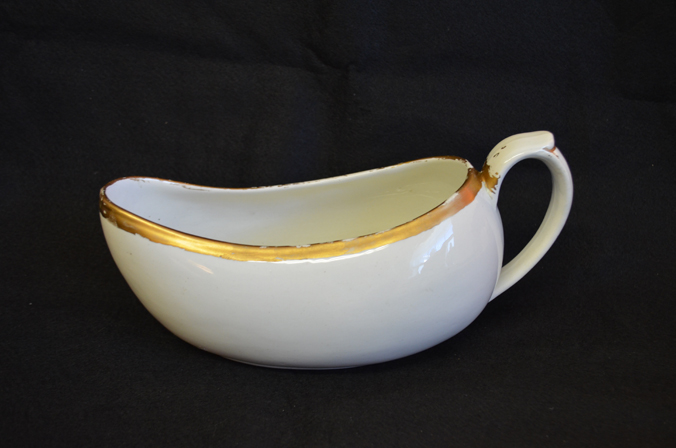 A replica bourdaloue purchased at the “Turn” auction.

While this might look like a gravy boat to modern eyes, it is actually a bourdaloue, which is a smaller and more feminine version of a chamber pot.  They could be china, tin, and even leather.

In an era without public toilets, the bourdaloue provided a lady with a portable and relatively clean means of relieving herself away from home.  The vessel was oblong, rectangular, or oval in shape and a slightly raised lip at one end and a handle at the other and allowed usage from a squatting or standing position.  The bowl would then be given to the lady’s maid who disposed of the waste discretely.  Bourdaloues slowly disappeared from everyday life after indoor plumbing and bathrooms made their way into everyone’s home.

Legend is that the bourdaloue got its name from a Jesuit priest, Louis Bourdaloue, who would preach for hours at church.  Ladies used the vessel as easy way to relieve themselves without missing a moment of his amazing sermons.  While amusing and repeated often on many websites, there is no historic proof whatsoever for this claim. 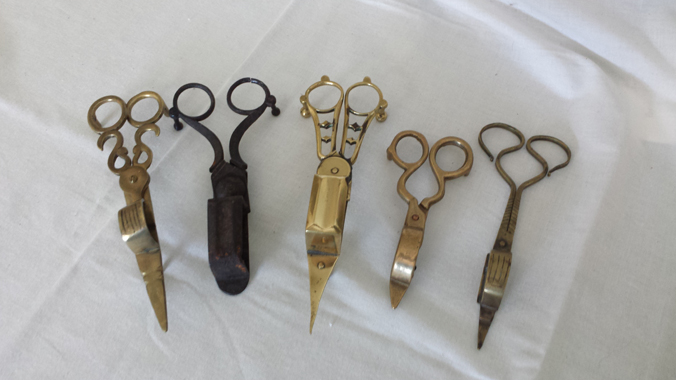 These odd scissor-like utensils were a must-have in the day when candles were the only lighting in a house.  Also known as “candle snuffs,” wick trimmers were, as the name declares, used to trim a candle’s burning wick. Trimming the wick kept your candle burning well, kept it from getting too hot, and kept it from smoking too much and creating excessive odors.

For centuries, the only source of light after-dark was either a fire in the hearth or a flame from a candle.  Candles for everyday use by most people were not made of lovely beeswax (which was terribly expensive) but rather from tallow, a fat from cows or sheep. Tallow candles were cheap and easy to make. You twisted a thread of flax, cotton, or hemp and repeatedly dipped it into melted fat.  The quality of a candle depended on the fat used.  The better the fat the firmer and less smelly the candle.

However, the wicks of these candles were not particularly efficient.  To keep them burning bright, they needed to be trimmed occasionally. Trimming was done to prevent soot build up or guttering, which is when the candle melts too fast and the wax or tallow starts to spill over the edges creating a mess.

Around the beginning of the 19th century, candle makers started braiding rather than simply twisting strands of cotton for wicks, creating a “self-trimming” or “self-consuming” wick.  This technique allowed the wick to curl back into the flame maintaining the height of the wick and therefore the flame.  This also meant more of the wick is burnt, leaving a less sooty snuff that needs to be cleaned.[1]

With this improvement to candles, wick trimmers were no longer essential to keeping your evening candles burning their brightest. Electricity further sped the decline of the trimmers in households and their purpose was forgotten by most people.  However, if you are a candle enthusiast, you might want to think about picking up a pair because proper wick maintenance can help even modern candles burn brighter and with less sooty mess. 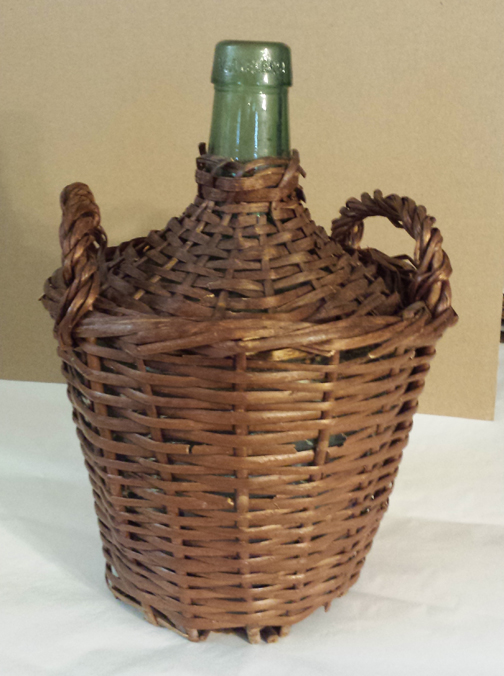 You may not know the official name but you have no doubt seen a demijohn if you frequent antique stores or consignment shops.   This glass vessel with a large body and small neck surrounded by wickerwork were used to ship large amounts of wine and spirits to merchants who would then parcel the alcohol out for sale to customers.

The origin of the word “demijohn” is murky.  Some say it comes from the French “dame-jeanne” and others say it is a corruption of the name of the Persian glass-making town of Damaghan.[2] Regardless, by the early 18th century, the word begins to appear in literature and advertisements.

Today, these glass wares are usually found in homes used for decorative purposes or even made into terrariums.  The older demijohns and carboys have usually been stripped of their wicker exterior to allow for a more visually appealing curio.