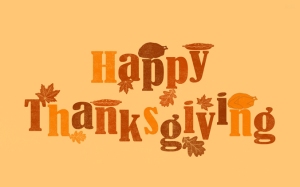 One of the first pieces of furniture that will arrive at the recreated Washington house at George Washington’s Ferry Farm will be the large, round dining table for the Hall.  It’s being made at a shop in Pennsylvania and we hope to have it before the end of the year.  With Thanksgiving just a week away, we wanted to take a look at the practice of dining and the furnishings it required in the early 18th century, before it became a formal ritual and before it had a dedicated room in the home.

We’ve discussed the evolution of the dining room in colonial America in a video here on Lives & Legacies and in numerous posts on The Rooms at Kenmore. As you probably recall, dining rooms did not appear in American houses until the second half of the 18th century and then didn’t become common until the end of the century.  Prior to that point (and even for a long time afterwards), meals were taken in almost every room of the house.  Furniture was moved to wherever it was needed, to take advantage of a cool breeze on a hot summer day, or the warmth of a fireplace in the winter, or simply because the number of people to accommodate changed from day to day.

What can be glossed over, however, is that early Americans didn’t need dining rooms because they really didn’t dine all that often.  They ate, yes, but not in any formal way, not at any set times of day, nor with set specific accessories.  Meals were simply brief breaks in the unending work of the day. Even in gentry families, everyone had a job or task that added to the family’s production.  Not everyone could break for a meal at the same time, so rarely did an entire family sit down together.  Meals weren’t considered a time to chat and catch up with family members, rather they were a perfunctory chance to refuel before moving on to the next task. The concept of the “family dinner” that we try so hard to maintain today is the product of a much later time period.

In a household where there were fewer chairs than family members, the men got first dibs with women and children either standing to eat or sitting down after the men were finished.  There usually wasn’t a central table but rather several spots scattered around a room or rooms where a person might set their plate or bowl while eating.  Even in a household where seating could accommodate all members of the family, children were bumped from a table and chair whenever company came to visit.  They were left to find a spot to perch elsewhere.[1]

The original Strother house at Ferry Farm was constructed during this early 18th century when meals were simply not an important part of life – none of its rooms were designated as eating spaces.   Tables and chairs that could be used for eating were found in both of the main rooms.  Even when the Washingtons enlarged the house after their purchase of it in 1738, specific rooms for dining were pretty much unheard of.

The Washington house features a room called the Hall, which was usually the largest room in a house of the time.  The space was multi-purpose, being used for everything from sleeping space and entertaining purposes to keeping livestock warm on particularly cold nights.  As the 18th century progressed, gentry families became more refined and devoted more time to increasingly formal versions of dining and the Hall eventually morphed into the dining room (probably because of the commodious space).

Augustine Washington’s probate inventory gives us a glimpse into this transitional time period.  When the inventory is taken In 1743, the large room in the Washington house is still called a Hall, and it clearly has a variety of uses, but it is stocked with two tables of considerable value and 12 chairs. This indicates that more formalized meals are taking place in the room.

Section of Augustine Washington’s probate inventory taken in 1743 showing the furniture and personal property listed in the Hall.

The mention of two tables – one large and one small – in a hall or dining room pops up quite often in period inventories.[2]  The likeliest explanation for having two tables in a dining space is one that is pretty familiar to us modern Americans.  When it’s just the immediate family sitting down to a meal, you only need the one table.  But, when the house is full of visitors, perhaps for a holiday or special occasion, an extra table may need to be on-hand to seat…well, the kids.  Whereas the kids were bumped from the table to a spot on the floor to accommodate guests earlier in the century, by the 1740s, they were rating a place at a table, albeit an auxiliary one.

“An Election Entertainment” (1754) by William Hogarth. The painting shows a Whig banquet thrown to win votes through food and drink, a common practice in both England and the Colonies. Two dining tables – a rectangular one and a round one – are visible. Credit: Sir John Soane’s Museum / The Yorck Porject / Wikipedia.

Interestingly, the contents of the Washington Hall at Ferry Farm mirrors almost exactly the contents of the Dining Room at Kenmore nearly 40 years later: one large table (identified as oval-shaped at Kenmore), 1 small table (identified as square at Kenmore), a large set of chairs (15 at Kenmore, 12 at Ferry Farm), one large looking glass, and a desk (a bookcase-on-desk at Kenmore and an escritoire at Ferry Farm).  Even in a very formal, elite house like Kenmore, there were still two separate tables to accommodate an overflow of diners and a desk, indicating multiple uses for such a large room.

We often find parallels between Kenmore and the Washington house in our research.  Betty Lewis learned her skills as mistress of the house under her mother’s tutelage at Ferry Farm, and so it seems logical that there would have been things that she did at Kenmore “just like mom.”  In furnishing the Washington Hall, we’ve decided to draw a visual connection between it and the Kenmore Dining Room, using one large round dining table and one small square table.  In fact, the reproduction table being made in Pennsylvania for the Washington house is based on the round table from our collection that is currently on display in the Kenmore Dining Room. 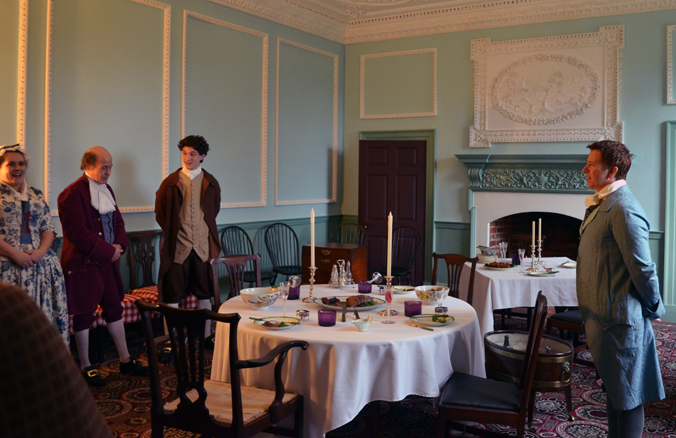 Kenmore’s Dining Room with both the round and square tables displayed during a performance of the annual holiday theatrical drama “Twelfth Night at Kenmore” each year in early January.  This season’s performances will take place January 5, 6, and 7. Visit kenmore.org for details.

So, as you make preparations for Thanksgiving, if anyone in your household grouses about being relegated to the kids’ table this year, just tell them to remember the Washingtons.  In their house, even George sat at a kids’ table and it was a pretty big step up!

[2] The Probing the Past database of probate inventories from Virginia and Maryland during the 18th and early 19th century is a wealth of information.  Here are links to just three inventories that show the table configuration discussed here: