The completed reconstruction of the Washington house at George Washington’s Ferry Farm.

The Washington house at Ferry Farm is now open for tours. The interpretive replica of George Washington’s boyhood home is an interactive and hands-on experience for all ages, where visitors can experience what life was like in the eighteenth century. Using information from the probate inventory and archaeological evidence, the Washington house is currently being furnished with replica furniture and ceramics of what was originally in the home. This allows guests the opportunity to sit on the furniture and handle the objects.

Following a plan conceived by The George Washington Foundation’s Collections Committee and curators, noted cabinetmakers are crafting reproduction furniture using pieces from the time period of the Washington house as examples. Craftsmen from Colonial Williamsburg produced a corner cabinet in the joiners’ shop and a tea table in the cabinetmakers’ shop using examples from the Colonial Williamsburg Foundation’s collection. Additionally, two dining tables, a set of twelve leather upholstered chairs, a “scrutore” – or desk with bookcase, a low-post bed, and a gaming table are currently on view in the Washington house.

The construction of the Washington house on its archaeological footprint is part of the first phase of The George Washington Foundation’s multi-year venture to physically develop George Washington’s Ferry Farm into an outdoor living museum. The first phase of the project will also include reconstructing the kitchen and outbuildings, and recreating the period landscape. Moreover, the Foundation is establishing a new entrance to the museum property, has erected a maintenance facility, and is completing necessary infrastructure. 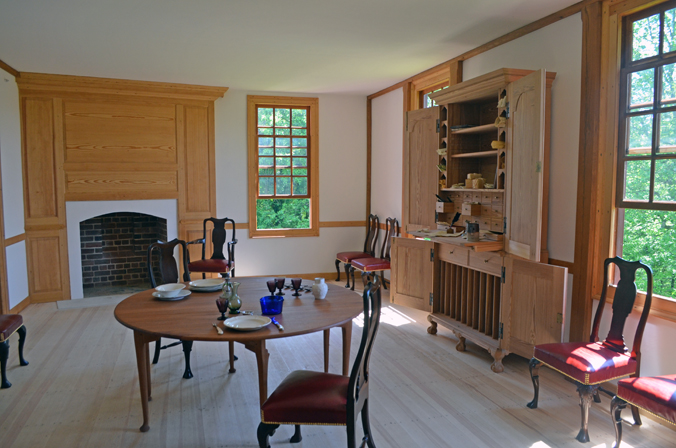 Dining table, chairs, and “scrutore” in the Hall of the Washington house.

Masons completed the brickwork for the three chimneys, each set in an English bond interspersed with glazed headers, while the carpenters fitted paneled doors with hand-wrought iron hardware and fabricating interior features such as an elaborate staircase in the center passage. Accomplished plasterers installed a traditional lime plaster, strengthened with animal hair, on wood lath across the walls of the Washington house.

The work yards behind the Washington house.

Constructing the Washington house and the first phase of improvements at Ferry Farm is a funding priority for the Foundation as part of The Future of Our Past Campaign—a $40 million dollar comprehensive fundraising initiative in support of efforts across its two National Historic Landmark sites: Historic Kenmore and George Washington’s Ferry Farm.

George Washington moved to Ferry Farm in 1738 with his parents, Mary and Augustine, his sister Betty, and their siblings, purchasing the site from William Strother III, a prominent colonial Virginian. Young George lived at the farm from age 6 to 22. Referred to as the Washington home house in George’s day, the property was later known as Ferry Farm—a historic ferry adjacent to the Washingtons’ house once linked it to the city of Fredericksburg via the Rappahannock River. The site was the setting of some of the best-known stories related to his youth, including tales of the cherry tree and throwing a stone across the Rappahannock River.

George was eleven when his father died in 1743. Augustine left Ferry Farm to George, for him to inherit when he reached majority. Mary Washington continued to live at Ferry Farm until 1772, when she moved to Fredericksburg to live closer to Kenmore and Fielding and Betty Washington Lewis.

View from the Washington house of Fredericksburg across the Rappahannock River.

In 1996, Ferry Farm was saved from commercial development through the hard work and determination of the Regents and Trustees of The George Washington Foundation (known then as the Kenmore Association), a long list of individuals, and several organizations.

The Foundation announced on July 2, 2008 that its archaeologists had located and excavated the remains of the long-sought house where Washington was raised. To date, over 750,000 artifacts have been unearthed at Ferry Farm. Ongoing research suggests that George’s experiences at Ferry Farm were influential in shaping the man that he would become.

On Saturday, April 25, 2015, the Foundation broke ground on the Washington house and the first phase of construction at Ferry Farm, forever preserving this remarkable landscape and providing a powerful stage to tell the story of young George and his family. Doris Kearns Goodwin, renowned presidential historian and Pulitzer Prize-winning author, was the keynote speaker for the Groundbreaking Ceremony.

Learn more about this comprehensive project here and here.