As you may recall from past posts (here and here) about our hunt for reproduction ceramics and glassware to use in the Washington house at George Washington’s Ferry Farm, and taking a page from the Colonial Revival playbook, our sources have been varied and surprising – junk shops, flea markets, TV show props liquidation sales, attics of friends and relatives.  You name it, we’ve probably been there! Now it’s time to take a look at what we’ve found, and show you how we decided what passed muster to be placed in the Washington house.  In this series of posts, we’ll examine different ceramics and take a look at the artifact recovered at Ferry Farm, the complete 18th century object those artifacts represent, and the reproduction pieces inspired by the artifacts and originals.  This first post will examine blue and white Chinese Export Porcelain (CEP).

The above tiny archaeological fragment was found on the Washington house site and identified by our archaeologists as being from fine, white porcelain tea wares, decorated in applied blue motifs.  Such tea wares are known as blue and white Chinese Export Porcelain (CEP) and were produced throughout the 18th century.

This 18th century blue and white teapot in the collection at Historic Kenmore is an excellent example of an English attempt to create porcelain like CEP.

Original porcelain made in China, where the technique was created and perfected, was highly coveted during the 1700s, but it wasn’t easy to come by and was often quite expensive.  Eventually, makers in England and other European countries tried producing this porcelain.  They were never quite able to simulate the very thin, nearly translucent white body, but they came close in replicating the decoration.  Colonists in Virginia, like the Washingtons, had an even tougher time coming across true CEP, so their collections of “porcelain” tea wares were often a mix of true porcelain and the thicker European variety.  The above teapot from the Kenmore collection is an example of an 18th century English attempt at creating porcelain like CEP.  While the ceramic body is sturdier than true Chinese porcelain, the blue decoration is very similar to CEP. 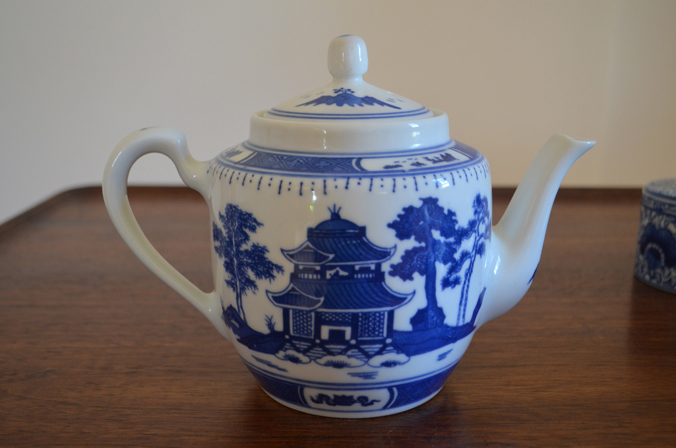 Above are some of the blue and white ceramics that we found to represent the Washington’s original blue and white CEP tea wares.  The difficulty in finding true porcelain continues even today! These pieces were selected because they all have blue decoration that is very similar to the typical motifs used in the Washington period, and their shapes and sizes correspond to what was available in the time period too.  In other words, from 5 steps away, they look just like period examples.  They were all produced in the 20th century, however, and represent manufactories in Germany and England.  Piecing together a tea service from multiple sources allowed us to accomplish another hallmark of 18th century tea wares: Nothing matches! Discerning buyers in the Washington’s time might choose a particular colorway that they liked and find individual pieces exhibiting those colors, but the idea of buying a complete tea set in one pattern was not a possibility until much later in the 19th century.

In the part 2, we’ll examine white salt-glazed stoneware artifacts, originals, and reproductions that will go in the Washington house.