Theatre is one of America’s most popular and thriving art forms. It has been a part of American culture since the early part of the 18th century. The development of theatre in the earliest American colonies in New England was prohibited because of those colonists’ strong Puritan beliefs. Colonial America’s first theater was built in Williamsburg, Virginia in 1716 after a number of English actors arrived in the more-accepting South and began performing plays.  Acting ensembles and student groups performed plays, which for the most part were amateur productions, in makeshift theaters and temporary venues—anything from a barn to a large tavern room. Eventually, theaters were built in other cities like Philadelphia in 1724, New York in the mid-1730s, and Charleston in 1736.

The typical colonial theater was not like the ornate theaters of today. Shaped like a shoebox, the stage occupied one-third of the space. The seating took up the remaining space. All different walks of life and classes came together to enjoy theatre performances from the boxes, the pit, or the gallery. The box seats were reserved for the wealthy, whose objective was to be on display for everyone while watching the play. The boxes were raised on the sides of the theater and faced each other and not the stage. The “middling sort” or middle class sat on the theater’s floor in the pit on wood benches. George Washington, a devoted fan of theatre, was said to have preferred watching from the pit despite being of the higher gentry class than other patrons seated there. The gallery was for the “lesser sort”—students, sailors, and even slaves – and was located in the area we’d call the balcony. In England, the lower sort could determine a play’s success and became known as “the gallery gods.” 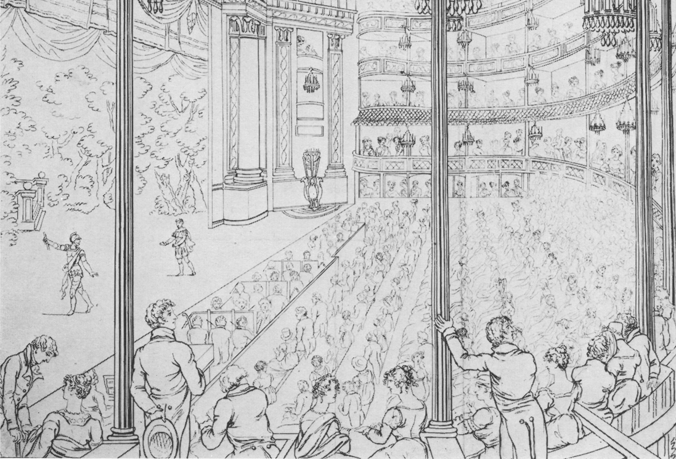 This sketch of the Theatre Royal, Drury Lane, London in 1813 — not long after it opened — gives an idea of how one of the world’s finest theaters appeared in the early 19th century. Colonial America’s theaters would not have been this elaborate. Indeed, many of the acting companies traveling in the colonies performed wherever they could. Performances usually took place in taverns but sometimes even in barns. Credit: Public domain.

William Hallam and his brother Lewis Hallam were the first to organize a complete company of professional actors called The London Company of Comedians in Europe to bring to the American colonies. They had seen moderate success but then eventual failure in England, so they decided to try their luck in America. They had their first performance in Williamsburg in 1752, where they rented a large wooden structure which they altered to meet their needs. Their opening play was Shakespeare’s The Merchant of Venice, and music was supplied by a single player on a harpsichord. It was said that the venue was so near the forest that the players were able to shoot wild fowl from the windows of the building. 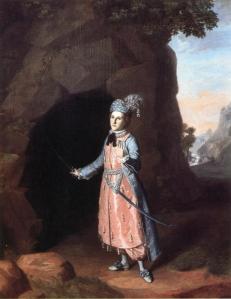 Lewis Hallam died in 1754 or 1755 in Jamaica where they had gone to perform, and his widow Sarah married David Douglass, manager of another company in the West Indies. In 1758 the companies merged and returned to New York City with Douglass as manager. The Hallams’ son Lewis Hallam Jr. was an actor and star of the company.  Responding to a growing sense of national pride, they renamed themselves the American Company of Comedians in 1763. They toured and converted theatres up and down the East Coast including the Southwark Theatre in Philadelphia, the first permanent playhouse in America and built in 1766. They also built the John Street Theatre, later known as the Theatre Royal, in New York in 1767. The Prince of Parthia, a Neo-Classical tragedy by Thomas Godfrey, was the first stage play written by an American to be presented in America by professional actors on April 24, 1767.

There were frequent attempts to ban plays during the Revolutionary War including a 1774 decision by the Continental Congress. This was a result of the opposition to British imports, as most plays were from England, as well as objections to the supposed frivolous nature of drama and other entertainments during a dangerous political crisis.

Once America gained independence from Britain, theatre began to flourish again as a national cultural art form. Restrictive wartime legislation was soon repealed and theaters opened across the country, including in formerly anti-theatre New England. By the end of the 18th century, American theatre was a rapidly growing, socially acceptable art-form, and it continues to thrive today throughout the country.

View theatre as many did in the 18th century—outside! Shakespeare on the Lawn at Kenmore returns for its fifteenth year with performances of As You Like It—Saturdays and Sundays: June 9-10 and 16-17, 7:00 p.m. Arrive early to tour the mansion and view the refurnishing. Bring folding chairs or a blanket, and maybe bring a picnic supper to enjoy. 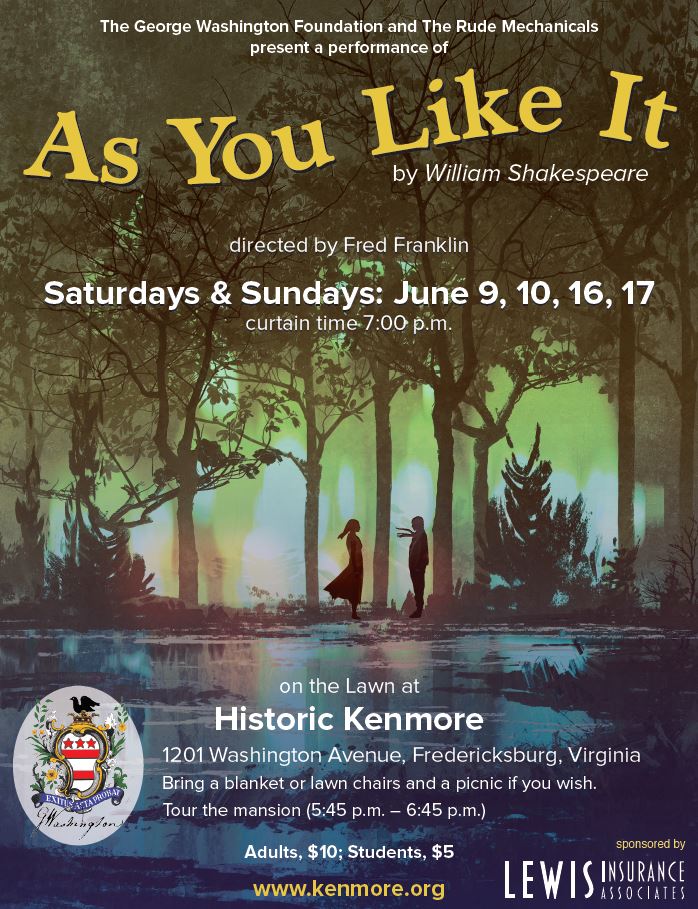