Despite issues of poor roads, lack of transportation, financial considerations and simply an absence of places to go, colonial Virginians fancied a summer vacation just as much as we do today.  In fact, getting out of the city, or away from hot, steamy climates and hordes of mosquitoes in the summer months was actually necessary for health.  In the late 1760s and right through the Revolution, Fielding Lewis and his brother-in-law George Washington joined a number of other Fredericksburg locals in making regular summer visits to one of the few getaways locales in existence at the time – the warm springs in (at the time) Frederick County.

Now known as Berkeley Springs in present-day West Virginia, the bubbling natural springs and their reputed medicinal powers have attracted visitors since long before Europeans came across them.  Native Americans visited the springs to take advantage of its healing waters, and told settlers about the spot, as well.  The site is labeled as “Medicinal spring” on the famed 1747 Fry-Jefferson map.

“A map of the most inhabited part of Virginia containing the whole province of Maryland with part of Pensilvania, New Jersey and North Carolina”, 1747 (the Fry-Jefferson map) by Joshua Fry & Peter Jefferson. Credit: Library of Congress. 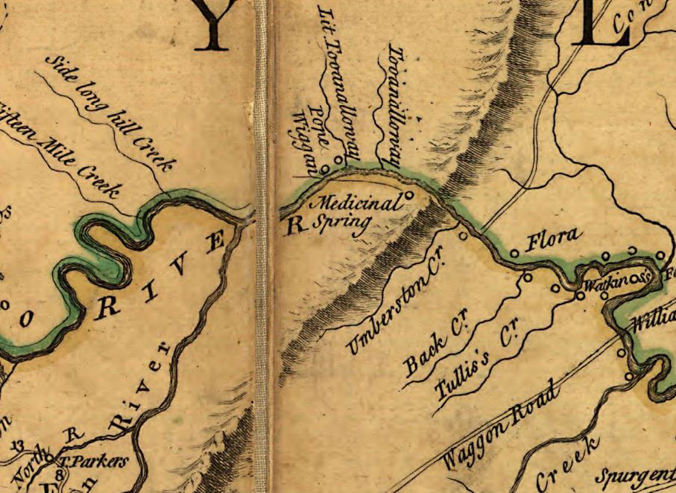 Enlargement of the Fry-Jefferson map showing the location of the Medicinal Spring frequented by the Washington and Lewis families. Credit: Library of Congress.

Sixteen-year-old George Washington made his first visit the following year, as part of Lord Fairfax’s wilderness surveying crew.  At that very early date, a visit to the springs really was purely for medicinal purposes, as there certainly were no other amenities to attract vacationers, and getting there was a feat in itself, being tucked away in the remote mountains.  To say that conditions were primitive would be an understatement, and young George was…unimpressed. In his diary, which he began on this trip and would continue for nearly the rest of his life, George wrote, “We this day call’d to see y. Fam’d Warm Springs. We camped out in y. field this night. Nothing remarkable happen’d…”[1]

Indeed, early reports about the situation at the “fam’d Warm Springs” conjur some interesting mental images.  Native Americans “took the waters” by simply hollowing out shallow pools in the sandy ground and squatting in them, allowing the natural spring water to bubble up around them.  They also built temporary saunas to steam in, and apparently allowed ailing white visitors to share.  Although, the shallow pits were eventually lined with stones found nearby to make them more or less permanent, one still pictures fully-clothed, wig-wearing colonists sitting miserably in tepid water, hoping their fever, cold or rheumatism would be cured.  As there were no structures built on the site, visitors hauled their own provisions, tents and even household staffs with them in wagons and camped out on the steep hillsides.[2]

And apparently, this state of affairs went on for quite a while, perhaps testifying to the desperation of the sick and injured in the 18th century for some sort of relief.  On a return trip to the springs in August of 1761, George Washington described a similar situation to what he had witnessed more than a decade earlier.  “We found of both sexes about 250 people at this place, full of all manner of diseases and complaints…They are situated very badly on the east side of a steep mountain and enclosed by hills on all sides, so that the afternoon’s sun is hid by 4 o’clock and the fog hangs over us till 9 or 10…I am of the opinion that numbers get more hurt by their manner of lying, than the waters can do them good. Had we not succeeded in getting a tent and marquee from Winchester, we should have been in a most miserable situation here.”[3]

Yet, despite the less than ideal accommodations, George did return to the warm springs.  And so did many other members of the Virginia gentry, including Fielding Lewis.  They did seem to believe that the waters there had a positive effect, and so the trip was worthwhile…but, gee, it sure would be great if they could have a bit more fun while doing it!  And so they set about turning the place into a more comfortable spot, a resort really, where they could not only take the waters but enjoy entertainments, visit with friends, have good food and drink, and generally have a good time for a few weeks every summer.  By all accounts, they succeeded.

The first effort to civilize the warm springs was by Fredericksburg resident James Mercer, a good friend of both Fielding Lewis and Charles Dick.  He apparently was given permission by Lord Fairfax to build a rather large summer cottage at the site, and it quickly became the center of Fredericksburg’s summer social scene.  The group of Fredericksburg friends, all young men in their 30s and early 40s, along with wives and children, journeyed to Mercer’s cottage for vacation.  In 1769, George Washington brought Martha and Patsy to stay for several weeks, and described the many visitors in and out of the cottage, including Lord Fairfax himself and his family members, and several former military friends from Pennsylvania.[4]

With the building of a new road to the area in 1772, James Mercer got some neighbors.  Inns and taverns sprang up (including Washington’s favorite, Throgmorton’s Sign of the Liberty Pole and Flag) other houses were built (although still mostly cabins and one room shanties) and the influx of vacationers increased.  It was a kind of hodge-podge, though, with no systematic plan for building or improvement.  The Fredericksburg friends (and associated relatives) saw an opportunity, though, and in 1775 they convinced Lord Fairfax to allow the laying out of a proper town, and Samuel and Warner Washington were put in charge of it.  Town lots were quickly bought up, mostly by the Fredericksburg contingent, and the building of cottages commenced.  The group decided to give their new town the rather aspirational name of Bath, after the popular spa resort in England.

So what was daily life like for a colonial Virginian on summer vacation? By the 1770s, life in Bath had changed drastically from the early days of squatting in shallow pits.  In addition to sampling the local mineral water, vacationers could enjoy public balls that happened twice a week, tavern nightlife, gambling, horse racing, daily teas at 5:00 and a number of options for food and drink.  By 1784, an advertisement in the Maryland Gazette describes the town as having five bathhouses, each with their own dressing rooms, an assembly room, and even a theater, where the travelling performance group The American Company of Comedians was expected to perform that summer.[5]

Noted early Virginia diarist Philip Vickers Fithian wrote of his visit to the springs in 1775, “In our dining Room Companies at Cards, Five & forty, Whist, Alfours, Callico-Betty &c. I walked out among the Bushes here also was—Amusements in all Shapes, & in high Degrees, are constantly taking Place among so promiscuous Company.” Fithian also goes on to describe the gentlemen of the village serenading the ladies from outside their lodgings until 4:00 in the morning, following a large ball.[6]

Fielding’s eldest son, John Lewis, and his cousin Warner Washington, who were in their 20s, were among the young gentry who suddenly found the springs interesting as entertainment opportunities increased.  The cousins eventually bought lots and built cottages, although it’s probably safe to say they weren’t there for the waters.  The little village had become so raucous in the summer months, a Methodist minister referred to it as an “overflowing tide of immorality.”[7]

But the curative properties of the springs were still the primary focus of visitors’ time.  Depending on the ailment that visitors were seeking to cure, they might “take the waters” up to three times a day at one of several actual bathhouses that had been built over the natural springs.  We have some description of these bathhouses from a French traveler, who vacationed at the springs in 1791, “…a plain and large frame structure, divided into eight small rooms made of badly joined boards where the bathers go in the morning. There is a staircase in each small room so that when the bather wishes he can gradually change the water line.”[8]  Both men and women used the bathhouses, but they did so at separate times of day.  At European spas of the day, men generally went swimming in the nude, while women wore bathing gowns, so that was perhaps the convention used at the American Bath, as well.

Fielding Lewis made an annual visit to the springs every August for several weeks, as early as 1772 and possibly much earlier.  When the town lots were laid out, he purchased #45 which fronted on Liberty Street.  His next door neighbor was Charles Dick, and James Mercer’s big cottage was just a few doors down.  Fielding’s mentions of his visits are few.  We don’t know whether the entire Lewis family travelled with him, although due to mentions in Philip Fithian’s journal, we know that in 1775 son George was with his father (George had attended the College of New Jersey with Fithian years earlier and Fithian enjoyed the chance to catch up with an old friend).  Most likely Fielding was among the springs vacationers who was there almost entirely for medicinal reasons, as his health had begun its long decline, and already the stresses of wartime were weighing heavily on him.

So there you have it.  It was cold, muddy and filled with hordes of sick and injured people, but the company was good and the party never ended – it was summer vacation, 18th century style!