At George Washington’s Ferry Farm, we largely focus on George’s youth but also eagerly research and learn as much as we can about all periods of his life. During our unexpected closure due to COVID-19, some of our interpretive staff had the chance to study a little more about Washington and the Culper Spy Ring for a reading group we created.

Early on during the American Revolution, it was apparent to George Washington that he would need a way to get information about British troop movements and, hopefully, their overall plans. The Siege of Boston was a huge success for Washington and his Continentals, but capturing New York proved to be much tougher. In fact, New York remained occupied by the British for the entire war but Washington continued to hope that he could liberate the city. And in that hope, he knew he needed intelligence from inside the city. Everyone who crossed the border, however, was searched by British soldiers and any direct letters were confiscated and the bearer convicted of treason.

After a failed attempt by a young solider named Nathan Hale, Washington knew the intelligence would be very difficult to gather, and even more difficult to transmit. He called upon another young Yalie named Benjamin Tallmadge to help him with his goal. In November of 1778, Tallmadge began The Culper Spy Ring. He contacted operatives in New York City and they developed a complex system of routes to pass along information. The operatives in Manhattan passed the information to a carrier in Long Island and then eventually a second carrier brought the information to Tallmadge in Connecticut. 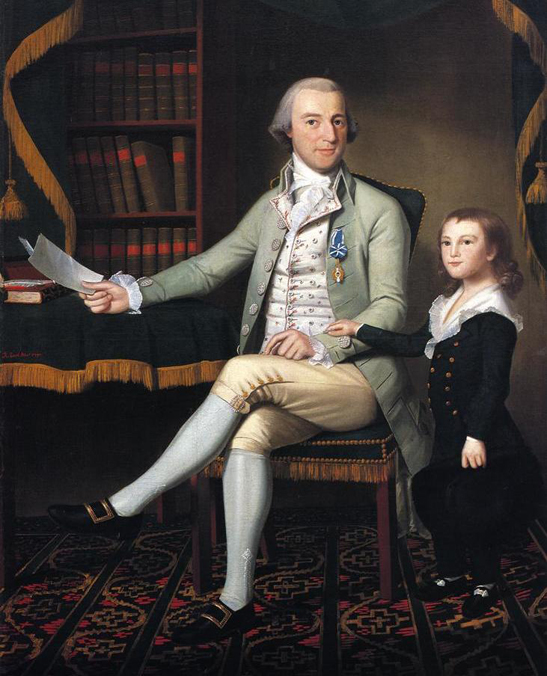 Portrait of Benjamin Tallmadge along with his son William painted after the war in 1790 by Ralph Earl. Credit: Wikipedia

The identity of the spies was so restricted that of the five operatives known to have helped, at least one of their identities is still highly debated by historians. Washington himself did not want to know their real names thus the agents were given nicknames. For example, Benjamin Tallmadge was called John Bolton, Abraham Woodhull went by Samuel Culper, and Robert Townsend was referred to as Samuel Culper, Jr.

The spy ring also developed a code that used over 760 combinations of numbers to represent people, places, and things. For example, Washington was 711, New York City was 727, and the lone female spy was referred to as 355. Of course, randomly filling a letter with numbers was a sure way to get caught, so they also used invisible ink and ciphers. 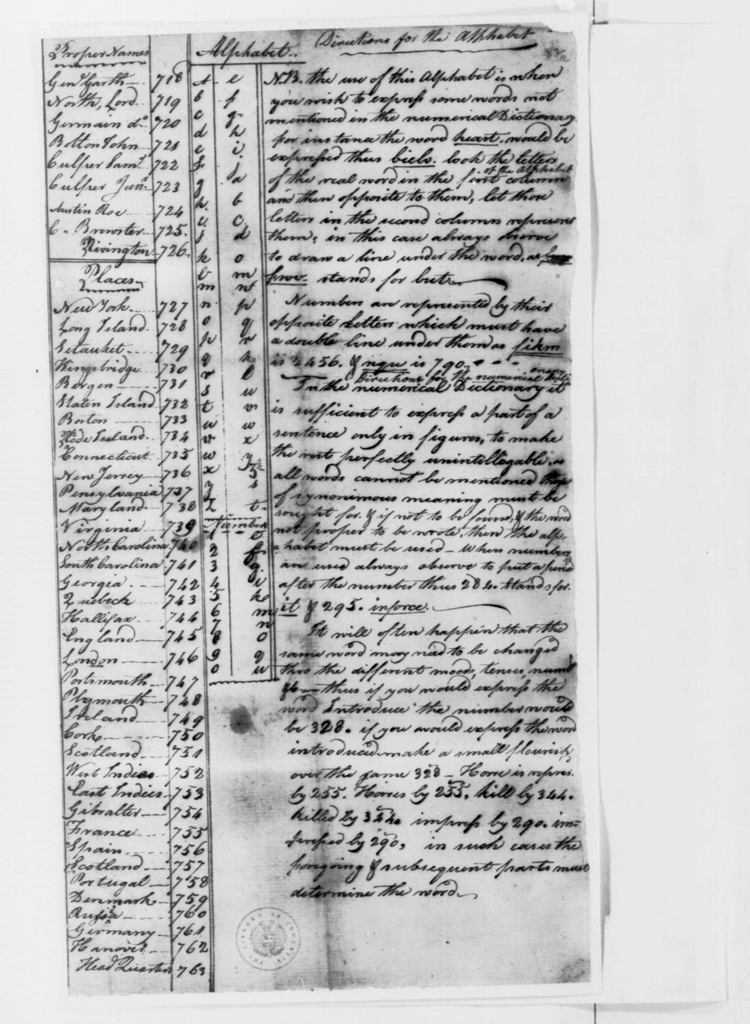 A page from the key to the Culper code. Credit: Library of Congress

Even with all these precautions, the work was dangerous and risky. The news traveled to Washington too slowly to be of much use, and he pressured Tallmadge to speed up the process. The spies were constantly in danger of being found out.

However, the Culper Spy Ring is credited with several key achievements. In 1780, the French Army arrived to reinforce Washington’s men and their ships landed in Rhode Island. The British knew they were coming and the spy ring passed that information along to Washington. He arranged a ruse to distract the British and allow the French to land without conflict. The Culper Spy Ring also unearthed some of the information that would lead to the discovery of Benedict Arnold’s treason as well as the capture of a major British intelligence officer, John André.

So, after reading about the Culper Spy Ring, one historic interpreter who leads tours of the Washington house was happy to share the part of the story that made them most interested in the intricate spy ring that helped win the Revolution.

Thanks to modern depictions, when I think of a spy the image that immediately comes to mind is someone with all the newest technology and an expensive taste in cars and clothes. Those that made up the Culper Spy Ring couldn’t be farther from the glamorized and romanticized depiction of spies that we have come so used to seeing. Though the five that made up the ring were from different walks of life and social statuses, they worked together (not always seamlessly) for a cause they believed to be worth more than their own lives. Through rather mundane means and careful exchanges, they were able to provide the key information for Washington under the nose of the enemy. The daring escapes across water by Caleb Brewster in a rowboat while taunting the most powerful naval force in the world were both hilarious and unbelievable. Brewster’s personality and general lifestyle makes him the odd one out in my mind. However, he also seems to be one of the most willing in many cases and jokes about the British not being able to catch him. Brewster’s personality more closely matches that classic spy image but his means are what really catch your attention. – Hunter Robinson