One of the aspects of a historian’s job is dealing with primary sources, the paper trail of history.  The archives here at The George Washington Foundation contain primary sources that include letters, wills, land grants, court orders, military orders, bills and receipts.  These hand-written documents are largely related to the Fielding and Betty Lewis family and provide us with a wealth of information on all facets of their lives from how much rum they bought to how much they paid in yearly taxes.  At the same time, they and other written historical records provide a glimpse into some fascinating dynamics of early American society and culture.

However, sometimes these documents can be difficult to read because, in the 18th century, writing style and spelling were still not completely standardized.

Students in early America usually learned to write by copying different styles of writing known as ‘hands’ in a copybook that showed alphabets and phrases in the ‘hand’ to be learned.  Students copied the alphabets and phrases exactly, for practice and for reference, and business forms.  For example, while attending school in Fredericksburg, young George Washington copied The Rules of Civility and Decent Behavior to learn handwriting as well as proper behavior in polite society. 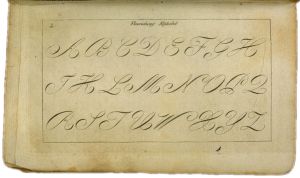 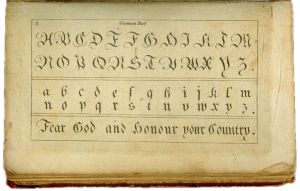 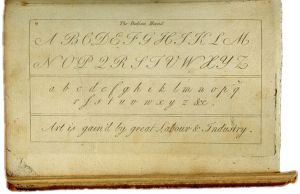 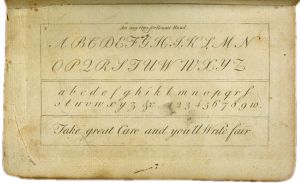 In the 1700s, writing was a skill reserved for select groups of people, mainly professionals and upper class males.  Women, artisans, lower classes, and the enslaved were not formally taught handwriting because it was viewed as unnecessary to their everyday life.  A lack of formal education did not stop people from writing.  Instead, they just developed their own system of penmanship and style.

Colonial-era writers could choose from a number of dictionaries to assist with spelling.  Many of these books, however, focused only on difficult, obscure, or archaic words.  It wasn’t until 1755 that Samuel Johnson published the influential A Dictionary of the English Language, which offered a more comprehensive lexicon of contemporary English of the time.  By the colonial period, much English spelling was recognizably modern due to the beginning movements of standardization in education and print. Dictionaries also assisted in the development of a more uniform writing style.

What if you had not been to school or had never seen a dictionary?  Well, you simply spelled a word the best you could by sounding it out phonetically.  So, ‘school’ became ‘skool’ or ‘laugh’ became ‘laff.’ A word might be spelled a dozen different ways by a dozen different people.  When read aloud, these words sound fine but, when silently reading a primary source document, the written phonetic spelling can take a few seconds to process. 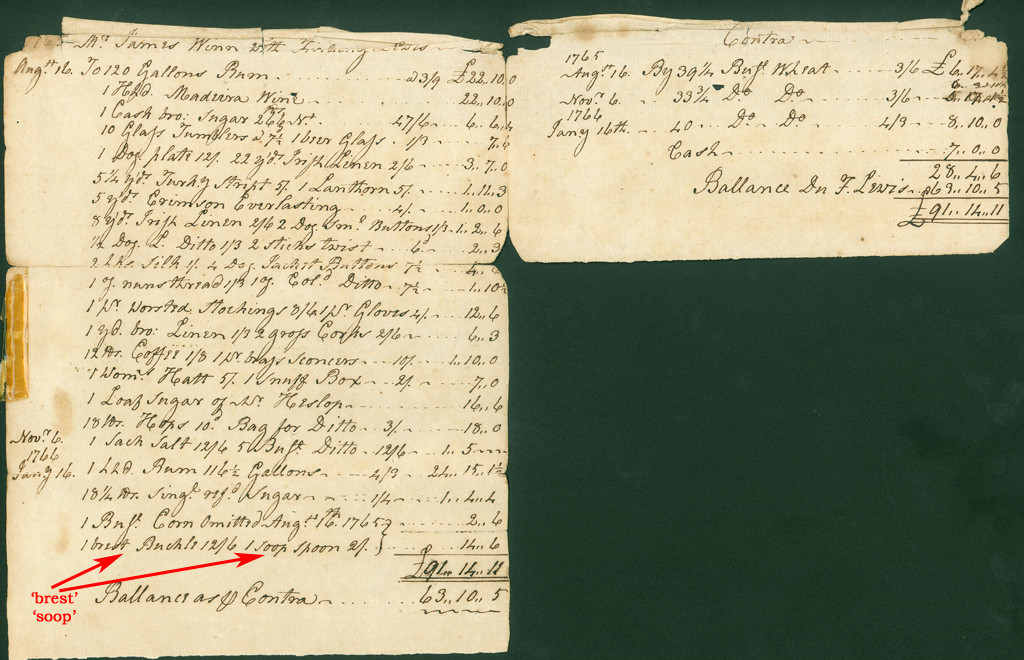 An account statement from 1766 between James Winn and Fielding Lewis that includes two examples of phonetic spelling: “brest” buckle and “soop” spoon.

The long ‘s’ was a style of spelling that generally fell out of use in print by the end of the 18th century.  It persisted in handwriting until the mid-19th century.  The long ‘s’ was an elongated version of a lowercase ‘s’.  It was often seen at the beginning of a word, in the middle of a word, and in words containing a double ‘s’.   A notable example is the spelling of Congress in the Bill of Rights.

Understandably, when we read primary sources today, the long ‘s’ is often mistaken for an ‘f’ or ‘p’ and it takes some practice to get the context of what is being said. 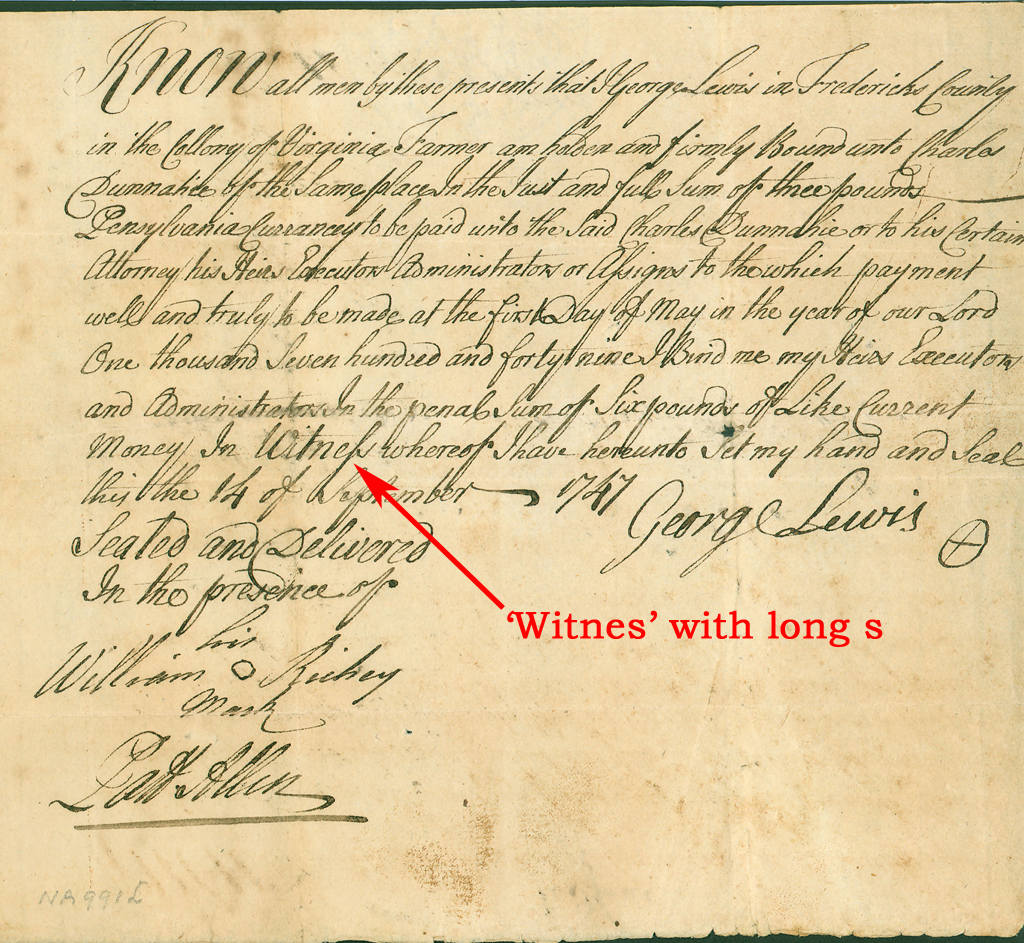 The word ‘Witnes’ in this document includes an excellent example of the long ‘s’ in the word and it’s close resemblance to an ‘f.’  This is a bond dated 14 September 1747 that requires George Lewis, who lives in Frederick County, to pay 3 pounds of Pennsylvania Currency to Charles Dunnahie by 1 May 1749.

Abbreviations and subscript often come up in colonial-era handwritten documents, particularly on bills, invoices and receipts. Shortening words or phrases like can’t for cannot or asap for as soon as possible is something we are familiar with today.  Commonly, abbreviations in the 18th century were indicated by beginning the word in regular-sized letters and ending with superscript letters like Recd for received.  Superscript or subscript letters are most frequently seen today in chemical compounds (H₂O) or in mathematical expressions.

This receipt, dated 25 September 1780, from Henry Rutter to George Lewis for 48 1/2 bushels of tax oats and 40 Bushels of Rye from George Lewis per Thomas Smither.  The “Recd” at the beginning of the receipt is an excellent example of both an abbreviation and superscript.

All the quirks in 18th century writing present many challenges for the historian.  Creating a system of deciphering can take time and plenty of practice.  At times, it can be more than a little frustrating.  Once the documents’ particular meanings are deciphered, the writing itself can reveal many different dynamics about early American society and culture.

Selective education provided a powerful form of social control and a framework for society to judge and instantly understand a person’s social status, education, and occupation.  At this time, it was not thought important for women, slaves, or the lower classes to know how to write.  Some even thought that teaching these groups to write would encourage them to aspire above their allotted station in life.  Writing gives people the freedom to express themselves and their ideas in a concrete way which can easily be transmitted to others, an uncomfortable prospect for a society based on a selective hierarchy.

Though a woman, George Washington’s mother Mary Ball Washington could write.  Her spelling was extremely phonetic as seen in this letter transcription and reflects a lack of formal schooling but not necessarily a lack of intelligence as some historians have argued.  Indeed, primary sources like Mary’s letters supported by “new archaeological data has yielded a decidedly more complex picture of this influential matron than is possible using the historical record alone.” Laura Galke, an archaeologist here at The George Washington Foundation, argues (PDF) that artifacts discovered at George Washington’s boyhood home at Ferry Farm demonstrate that Mary “enjoyed the personal agency that widowhood allowed her; she was responsible for the management decisions of the Washington household and the surrounding farm. Mary’s choices reflect an ambitious woman determined to participate in the genteel society her family had enjoyed before Augustine’s death.”  This required much intelligence.

Interestingly, Mary’s daughter Betty Washington Lewis also knew how to write.  Mary ensured Betty knew how to run a household and keep in touch with family, which numerous letters written by Betty show she did effectively. 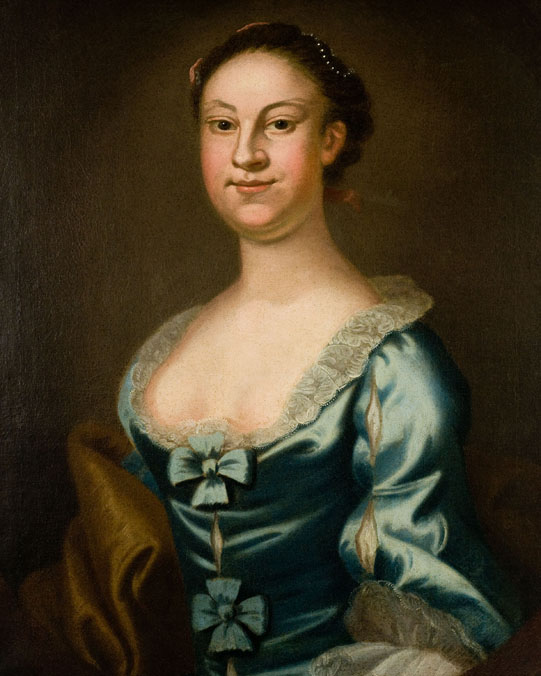 Her phonetic spelling in this letter transcription is an improvement over her mother’s.  The improvement in Betty’s spelling when compared to Mary’s further illustrates the increasing standardization during the 18th century and can also be seen as an example of changing beliefs in education for women at the end of the 1700s.  A movement was growing late in the century to teach writing to women.  This movement, however, did not come from a revolutionary drive for equality but, rather, from an expanded idea regarding the duties of Motherhood.  If women could not read and write, it was thought, how would they teach their sons, the future generation of leaders, to do the same?

Though difficult, at times, to decipher, the simple act of writing gives us a glimpse into the minds of people who thought about and experienced a life quite different from ours.