Ask someone to list traditional summertime activities and they will probably mention picnics, family reunions, beach vacations, mountain getaways, and baseball games. Their list is likely to include going to the fair as well.  The fair as a summer pastime is a long tradition and like many American traditions can be traced back to the age of Washington.

In 1738, Augustine Washington moved his wife Mary and their five children, including six-year-old George, to Ferry Farm on the Rappahannock River opposite Fredericksburg, Virginia.  Coincidentally, in the same year, the colony’s General Assembly authorized two fairs to be held each year in Fredericksburg (pg. 35). This act built on an earlier ordinance passed in 1705 allowing for ‘markets and fairs’ as a necessary and civilizing element of early Virginian society.

Although other cities held fairs, Fredericksburg was one of the few that held a fair in June.  Sometimes called June Fair, it was one of the oldest and largest in the colony.  June Fair and other fairs were “first and foremost a market ‘for the sale and vending of all manner of cattle, victuals, provisions, goods, wares, and merchandizes.’ Prizes, ‘or bounties,’ were sometimes offered for the best stock and poultry” (pg. 18). 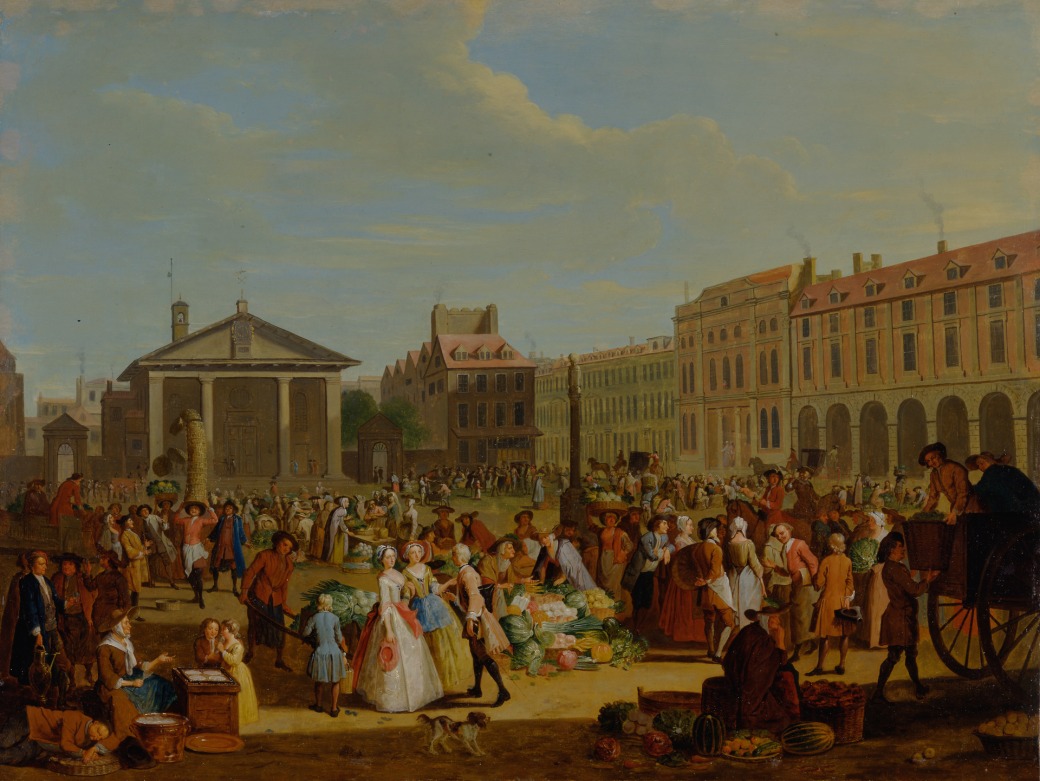 Fairs were about more than agriculture, however. The importance of a summer fair was its ability to gather people from all over the surrounding counties to a single central location to conduct business and government and to offer social interactions and entertainments.  In an agricultural colony such as Virginia, homes and plantations were very distant from one another and, for much of the year, people hardly saw anyone besides their immediate neighbors and family members.  Most colonial Virginians traveled no more than fifty miles from home in their lifetimes. This made for an isolated existence focused on the constant attendance of crops. During natural seasonal breaks, however, farmers traveled to a town to sell those crops at the fair.

Fairs were not just for farmers to sell. Court sessions, also known as ‘Public Times’, often coincided with fairs. Soon merchants and entertainers saw opportunity in the large numbers of people gathered together at the fair. Many people got paid or, more likely, an increase in credit and ready money made the fair a natural time to celebrate, entertain, gamble, and socialize.

Among the amusements common to colonial-era fairs,

“contests for prizes . . . in cudgeling, wrestling, manual-exercises, foot-racing, dancing, singing, violin-playing, greased-pig-chasing, etc. Prizes were offered to the most beautiful maid.  In towns large enough to warrant their attention, companies of actors sometimes arranged to give plays during fairs. Such plays, however, were held at the local play-house or theatre, and not on the market-square, where the fair usually took place” (pg. 19).

For example, in 1752, an acting troupe known as “THE Company of COMEDIANS, from the new Theatre at Williamsburg, propose[d] … to proceed to Fredericksburg, to play during the Continuance of June Fair.” The troupe hoped “That all Gentlemen and Ladies, who are Lovers of Theatrical Entertainments, will favour us with their Company.”

Advertisement in The Virginia Gazette announcing the appearance of the Company of Comedians at June Fair in 1752.

The fair brought people together to conduct more than agricultural business.  Indeed, “the fair was also a place where men met to make and pay debts. Land, houses, storehouses, and personal property were offered for sale at fairs — privately and by public auction” (pg. 18).

During June Fair in 1751, 19-year-old George Washington auctioned off two of his lots in Fredericksburg.  His announcement of the sale in The Virginia Gazette offered the lots, “where Mr. Doncastle and Mr. Black lately kept Tavern, next June Fair, to the highest Bidder, for Cash or Bills. Eight Months Credit will be allow’d on giving Security, as usual” and was signed “George Washington.” 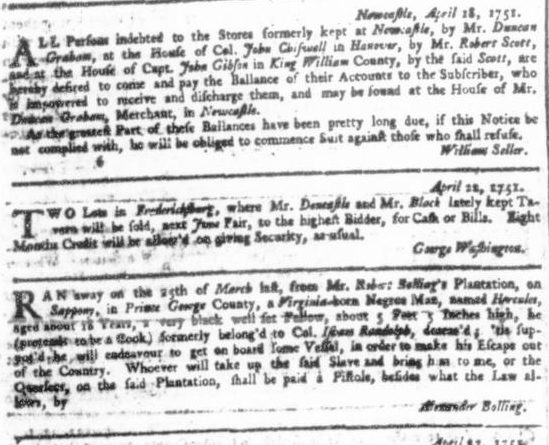 Announcement placed in The Virginia Gazette by George Washington announcing his intention to auction off two lots of his land in Fredericksburg at June Fair in 1751.

Indeed, “the most popular attractions of the fairs in Virginia and Maryland were the horse-races . . . held at race-tracks near the town. Purses were subscribed, and many gentlemen, who had no interest in the other activities, would attend the races” (pg. 19).

Gambling at the fair, mainly in the form of lotteries, even supported more noble pursuits.  At June Fair in 1769, a lottery was undertaken to raise £450 for building a new church and for purchasing an organ for that church.  The drawing was to take place on “the 7th day of JUNE next (being the first day of the Fredericksburg fair) at the town-house” and was supervised and supported by a host of the town’s luminaries including Charles Dick, Hugh Mercer, Charles Washington (George’s brother), George Weedon, and Fielding Lewis.

June Fair was a community event attended by Virginians from across the colony and brought George Washington back to his boyhood home on more than one occasion.  At the fair, Virginians sold farm goods and land, settled debts and tried court cases, enjoyed a play and gambled on the horses.  June Fair, much like today’s summer pastimes, was a moment in the year to enjoy the summer weather and the company of neighbors, friends, and family before returning to isolated plantations and farms and the unending work of plowing, planting, and harvest.