Fielding Lewis was married twice.  He and Catharine Washington, his first wife, had three children: John, Frances and Warner.  Both Warner and Frances died leaving John as the sole heir from this first marriage.  After Catharine’s death, Fielding married Betty Washington, and not quite a year later Fielding Lewis Jr. was born in 1751.  Although just 4 years younger than his half-brother John, by rights at that time, Fielding Jr. could have supplanted his older brother as Fielding Sr.’s primary heir.  No personal accounts or letters tell us what Fielding Sr. thought about his two eldest sons’ status as heirs to his estate but his actions in the years after their births are telling.

In 1775, Fielding Lewis commissioned five portraits by American artist Charles Willson Peale, for his newly completed home at Kenmore.  Only two have been located and they are of Fielding’s two eldest sons.  Peale scholars feel fairly certain that the works were painted as companion portraits, intended to hang side by side with the poses of the two sitters meant to complement one another.  Perhaps Fielding was making a visual statement that his two eldest sons were on equal footing and that neither took precedence.  Indeed, in his final will and testament, Fielding provides for both sons equally, giving his Spotsylvania lands to John and his Frederick County lands to Fielding Jr.  On the surface, it might appear that the two brothers had an amicable relationship, not marred by the usual 18th century family in-fighting over inheritance.  Well, that appearance might not tell the whole story.  The half-brothers couldn’t have been more different.

As early as 1769, Fielding Sr. worried about Fielding Jr’s management of his finances.  The 18-year-old had recently married Nancy Alexander, the daughter of a prominent household in Alexandria, Virginia.  Nancy apparently came to the marriage with a sizeable fortune and Fielding Jr. immediately set about spending it.  In September, both Fieldings wrote to George Washington, to ask his assistance with the Alexander money.  Fielding Jr. wrote his uncle, “Inclos’d you have an Order on Mr. Robart [sic] Alexander for the Balance remaining…of my Wifes Fortune which I shall be Oblig’d to you to receive for me, and purchase Slaves to the amount thereof…” His letter is enclosed in one written by his father, in which we learn a little more about Fielding Jr.’s request to his uncle.

Fielding Sr. revealed that Mr. Alexander was concerned at the rate with which Fielding Jr. was spending the money, and has asked Fielding Sr. to take the remainder and use it for something that would help the couple in the long run.  Fielding Sr. went on to say, “I am allmost [sic] certain that he will in a year or Two spend every Shillg as I cannot perceive the least amendment since his Marriage, nor has he the least regard to any advice I give him.” This statement seems to indicate that Fielding Jr.’s spendthrift ways existed prior to marriage and worsened with the influx of his wife’s money.

Unfortunately, Fielding’s prediction would prove true.  Over the next decade, Fielding Sr. paid his son’s debts time and again, while Fielding Jr. continued to make significant purchases on credit.  Eventually, Fielding Sr.’s burden would be passed to John Lewis.

Fielding Lewis passed away in 1781.  John Lewis remained in the Fredericksburg area, acting as executor of his father’s estate, and seeing to its myriad debts and complicated business transactions.  He oversaw operations on the lands left to him, and assisted his step-mother, Betty Lewis, in maintaining Kenmore, which would become his upon her death.  He wrote on several occasions of tight finance, and frustrations with his father’s estate but managed to hold it all together.

His brother Fielding (who dropped the “junior” from his signature following his father’s death), was not managing so well.  He, his wife, and their three children were living on the Frederick County property that he inherited.  His debts were so severe that, by 1784, he was in debtors’ prison and again turned to his famous uncle for help.  In order to bolster his case for being worthy of Washington’s assistance, he sent a collection of letters from his father prior to his death that outlined his plan to save his son from the debt of his “youthfull Folley [sic].”  Fielding wrote, “Since which it has pleased God to take him out of this transetorey [sic] life, before he had Completed his Intention, tharefore [sic] I have taken the Freedom and liberty, of beging you to Assist me…for what Evor Sum or Sums you will be Able to lend me…as Nothing I think in this life So disagreeable as to be drag’ed About by the Sherrifs [sic]…Which Situation I am in at present…” 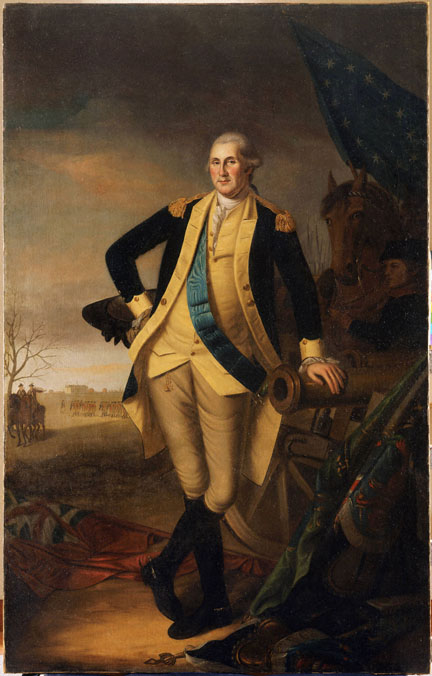 Washington gently rebuffed his wayward nephew, replying that he had his own debts and there was little money to spare.  He made a pointed statement at the end of his short letter, perhaps indicating that he didn’t fully believe Fielding was the victim of his own youthful folly. He wrote, “There was a great space between…when you were called upon by your Father for a specific list of your Debts and his death: How happened it, that in all that time you did not comply with his request?” Indeed, receipts in our archives show that Fielding commissioned a new carriage to be made for him in August of 1784, just one month before he was sent to prison.  He would not pay for the carriage until a suit was filed against him two years later.[1]

As Fielding was seeking help from his uncle, John was planning one of many trips to “the Westward” as he called it – the Western frontier, and Kentucky in particular.  His first expedition to the Kentucky territory was on behalf of his father, before the Revolution, when Fielding Sr. was considering a land purchase there.  Apparently, John fell in love with the country, and returned many times in the coming years, making several land purchases of his own.  His uncle George asked him to act as his agent on several of these trips, to assess the state of Washington’s own property near Pittsburgh.

While Washington was placing increasing trust in John, he had apparently lost faith in Fielding Jr.  By 1786, Fielding had been released from prison but had lost all of his inherited land in Frederick County.  He and his family were living on a lot in Fauquier County and were attempting to build a house.  Once again, Fielding asked for assistance.  Washington’s response was not as gentle this time, replying, “Altho’ your disrespectful conduct towards me, in coming into this country & spending weeks therein without ever coming near me, entitles you to very little notice or favor from me; yet I consent that you may get timber from off my Land in Fauquier County to build a house on your Lott…”  Despite his sharp words, he still agreed to help.

Fielding’s improved situation was short-lived.  His wife Nancy died in 1788.  Fielding remarried to Elizabeth Dade, who apparently did not bring a fortune to the union, and so the 1790s would be a rough decade for Fielding.  He was returned to debtor’s prison in 1790, and found that there was no one in a financial situation to save him, with the exception of his brother John.  John, however, was not willing to give him money outright.  Instead, he required that Fielding mortgage everything – slaves, housewares, livestock – in exchange for £1200.[2]  One senses the family losing patience with Fielding.

In 1792, Fielding was again incarcerated for debt, and this time there was no home for his wife and children, who went to live with Betty Lewis at Kenmore.  Betty wrote to her brother George about the situation, “I am sorry it will not be in my Power to advance any, haveing at this time three of my Grandchildren to support, and god knows from every Account but I may expect as many more shortly, Fielding is so distrest that his Children would go naked if it was not for the assistance I give him…”

After this disastrous turn of events, Fielding’s whereabouts for the rest of his life become murky.  He never again owns property, and most likely stayed with various family members, including John.  His children remained with Betty at Kenmore.  There may have been little contact between Fielding and his children, as indicated in a letter written to him by his brother George informing him of Betty’s death in 1797. George wrote, “You will no doubt be anxious to know what is to be done with poor little Nancy (Fielding’s daughter), she is in good health, and at present with sister Carter…”[3] It is unknown where Fielding was when George sent him this letter.

After Betty’s death, John moved quickly to sell Kenmore.  Although it would take several years, he did eventually save enough money to move his family to his land in Kentucky, where he spent the rest of his life.  Perhaps the family obligations and strain of his father’s estate made Kentucky a more appealing home than Fredericksburg.  While Fielding Lewis Sr. wanted very much for his two eldest sons to be seen and treated as equals, their lives played out in very different ways, and that’s the real story behind the portraits.