We look at our cats today as the furriest, purriest companions known to humankind. But most cats in colonial America worked for their status as the designated house cat.  It wasn’t all lazy days trying to squeeze into the smallest box possible or snoozing in that tiny sliver of sunlight on the living room floor. I’m a proud companion of a seven year-old fat cat named Jeffrey, who spends much of his time doing these very things.

Jeffrey in his favorite spot- the fruit bowl on the kitchen table.

Jeffery probably would not have enjoyed being a working cat in the past.  Don’t get me wrong, according to archaeologists; many civilizations have treated cats as companions for at least 8,000 years! But cats were often expected to serve a practical purpose, too. Along with companionship, cats were expected to work at jobs like pest control and to even serve as weapons.  This extreme version of work was proposed in an early German explosives and artillery manual that depicts a weaponized cat and bird set loose into an enemy town. 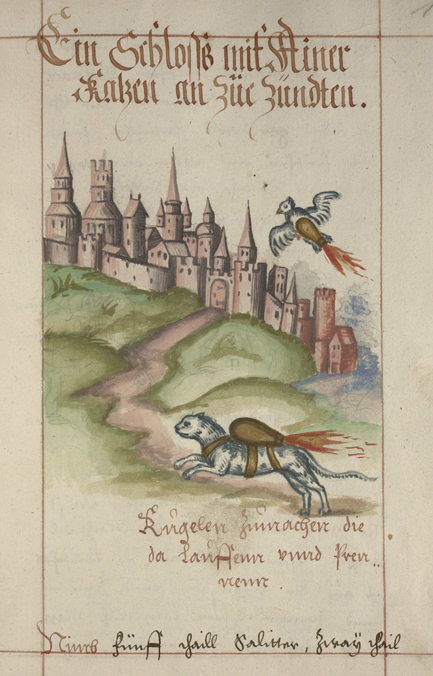 From a “Treatise on munitions and explosive devices, with many illustrations of the various devices and their uses” by Franz Helm (1584). Credit: Rare Book & Manuscript Library University of Pennsylvania Ms. Codex 109.

I expect neither pest control nor explosive assaults from Jeffrey, however. The only thing he “attacks” is the lawn and, more often than not, cardboard boxes. 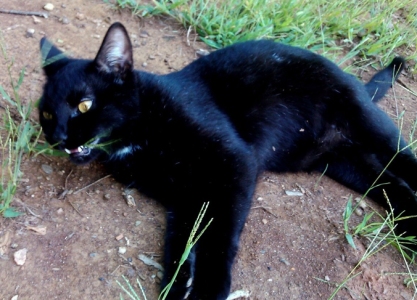 Cats as Work Animals
For thousands of years, cats accompanied sailors to sea, including European sailors travelling to the colonies. Rats carrying fleas and disease are common stowaways on ships. As a result, cats were — and still are — used as pest control during sea travel.  Even today, sailors have “ship’s cats” to control vermin onboard their vessels. Not only do they prevent disease and destruction of foodstuffs but they keep vermin from damaging ropes and electrical wiring, which could prove CATastrophic (heh heh heh) if not for ship’s cats. 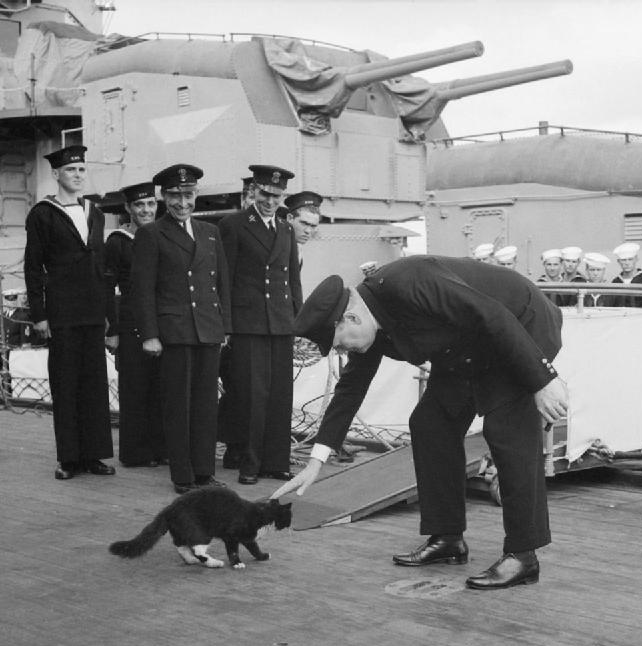 Prime Minister Winston Churchill stops ‘Blackie’, ship’s cat of the HMS Prince of Wales, from crossing over to an American destroyer during the Atlantic Conference with President Franklin D. Roosevelt off the coast of Newfoundland in August 1941. Credit: Imperial War Museum.

Similarly, when Europeans first established their colonies, survival rates were much lower in the beginning due to famine and disease, so pest control was important on land as well as at sea.   Settlers often kept pragmatic, but friendly relationships with cats in order to keep vermin at bay. 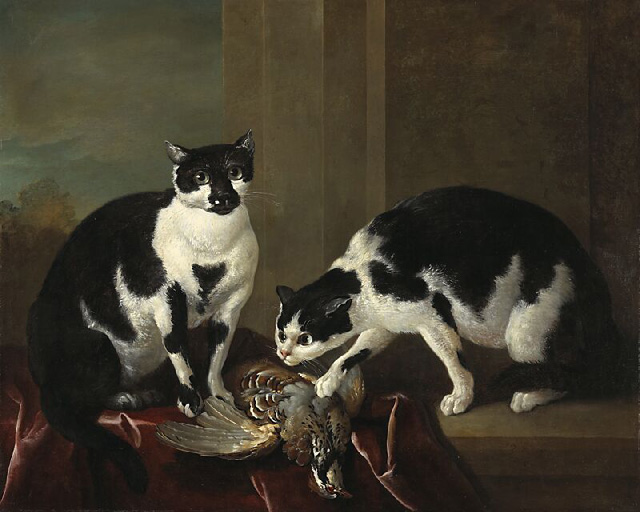 “Two Cats” by Jean-Baptiste Oudry (18th century) depicts cats doing what they were expected to do, which was to kill disease carriers and some birds, like rats, carried disease vectors or could endanger crops. Credit: National Gallery of Canada.

The Enlightenment
We humans of course established bonds with our friendly working critters and some cats were adopted as what we now call “pets”. The 18th century was a transformative time in pet ownership as we have shown with dogs in another blog post. It had not always been acceptable to keep a pet in European countries. The luxuries that our pets enjoy today would be inconceivable to a person before the Age of Enlightenment. Outfits, daycare, even hotels are now available to our furry friends.  In earlier times, pets were deemed wasteful because keeping them devoted resources to an animal that was neither food nor used for its labor. It was even considered sinful to squander resources on non-working animals. Pets were a luxury saved for the bourgeoisie.

During the Enlightenment, people became more aware of their own sensibilities and opened up to a range of new philosophical ideas. There was a shift from the church being the main authority to the belief that the primary source of authority and knowledge was reason.  People who were newly questioning authority also undoubtedly questioned why they could not devote resources and attention to an animal for no other reason than enjoyment and companionship.  With this attitude change, animals became viewed more as a non-human member of the household and were eventually valued in their own right. Cats became pets.

“Favourites”
We can see the growing prominence of cats as pets in 18th century poetry, paintings, and songs.

One such poem by Thomas Gray published in 1748 was called Ode on the Death of a Favourite Cat, Drowned in a Tub of Gold Fishes. The next-to-last stanza describes the tragic moment.

Eight times emerging from the flood
She mewed to every watery god,
Some speedy aid to send.
No dolphin came, no Nereid stirred;
Nor cruel Tom, nor Susan heard;
A Favourite has no friend!

When Gray called the ill-fated cat “a Favourite,” he used an earlier term for “pet”.

European and American portraiture repeatedly depicted people with their pets and cats were common subjects both alone and with their human counterparts. Below, you can see two 18th century portraits of people interacting with their favorite cats.

As seen above, Joseph Wright took time to depict two small girls dressing up a kitten.  In children especially, the joy a companion animal brings was irresistible. This critter was undoubtedly a favorite and probably wasn’t expected to do much in the way of work.

Above Edward Bird shows a woman enjoying her tea with her companion cat by her side. She even seems to allow the cat onto the table, which many people won’t allow their pets to do even today.

Finally, an 18th century Polish folk song called  “Wlazł kotek na płotek” or “The Kitten Climbed the Fence” was a very popular lullaby, describing a child and grandmother treating the kitten as a favorite by giving it milk when it climbs the fence into their yard.

Thanks to the Enlightenment, according to the Humane Society of the United States, over 97% of cat owners today consider their cats to be a family member or companion. In a way, nearly all domestic cats in America today are “favorites” rather than sources of labor.  The nature in which Americans treat their pets, whether cats, dogs, chickens, or goldfish, reflects the progression of change from the time of the Enlightenment and into present day. While academic research on such an abstract subject is difficult, it is easy to understand how cats progressed from worker and protector to best friend.