Old, crushed, and rusted food cans in and of themselves aren’t terribly interesting, at least not to me.  But when the can contains 150-year-old bullets, it becomes very interesting indeed.  Recently, while going through our artifact collection database, I came across an item excavated at George Washington’s Ferry Farm nearly 20 years ago and simply listed as a ‘can’.  Wanting to know the exact nature of this can (Was it a food can? Was it a paint can?), I looked at the database’s comments section, which sometimes describes an artifact in more detail.  The comment read:  “Smashed can containing Minié balls.”  Now this can had my full attention!  I had the can pulled from artifact storage and was not disappointed.  It was, as advertised, a flattened can with at least 3 visible Minié balls lodged inside. Furthermore, there was something not visible rattling around inside of it.  Because it had simply been cataloged as a ‘can’, it escaped the notice of our crack team of research archaeologists for two decades.  I began investigating! 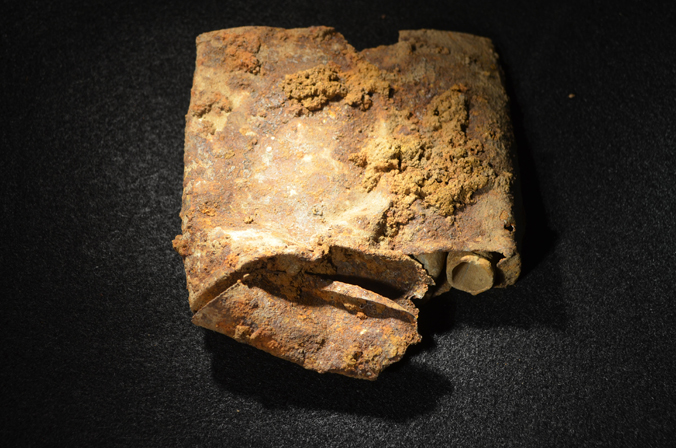 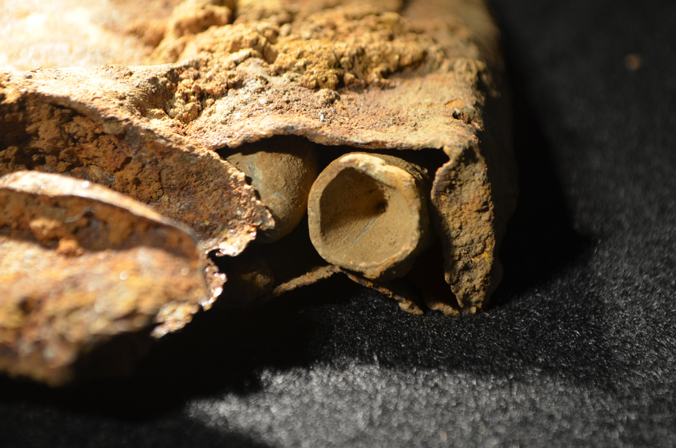 The end of Minié ball sticking out of the can.

First, I wanted to know the age of the can.  I knew the Minié balls dated to a little over 150 years ago when Union soldiers were stationed at Ferry Farm during the Civil War. The can, however, may have been from a later date.  In oral histories, people who lived at Ferry Farm in the 20th century have mentioned collecting Civil War bullets in cans so my initial assumption was that this was the forgotten treasure of a relic hunter.  The next step was to examine the other artifacts recovered with the can at the same time and in the same spot on the Ferry Farm landscape.  All of these artifacts were from the mid-19th century.  Furthermore, the can was excavated from smack dab in the middle of a Civil War trench that runs across Ferry Farm.  So the can and the bullets were from the same time period.

But the can didn’t look anything like a typical cartridge box.  It looked like a run of the mill tinned food can and what was rattling around inside?  It was time to do some science!  I took the can to the Virginia Department of Historic Resources where their awesome conservator Katherine Ridgway was kind enough to x-ray the can.  The x-rays proved the can was a food can and that the rattling object inside was another Minié ball.

While we now know a lot more about our can now, one mystery still remains. Why did a soldier store some of his bullets in a can?  What we do know is that, at some point, the can was abandoned or forgotten at the bottom of the trench and then crushed either under a boot or by the weight of the dirt once the trench was filled in after the war.  A 150 year old moment in time captured in the archaeological record.