A staff member who works at George Washington’s Ferry Farm and Historic Kenmore recently vacationed in London.  Little George accompanied her and visited places related in some fashion to George Washington and his era as well as the city’s most popular tourist sites.  Here is a collection of photos documenting Little George’s travels! 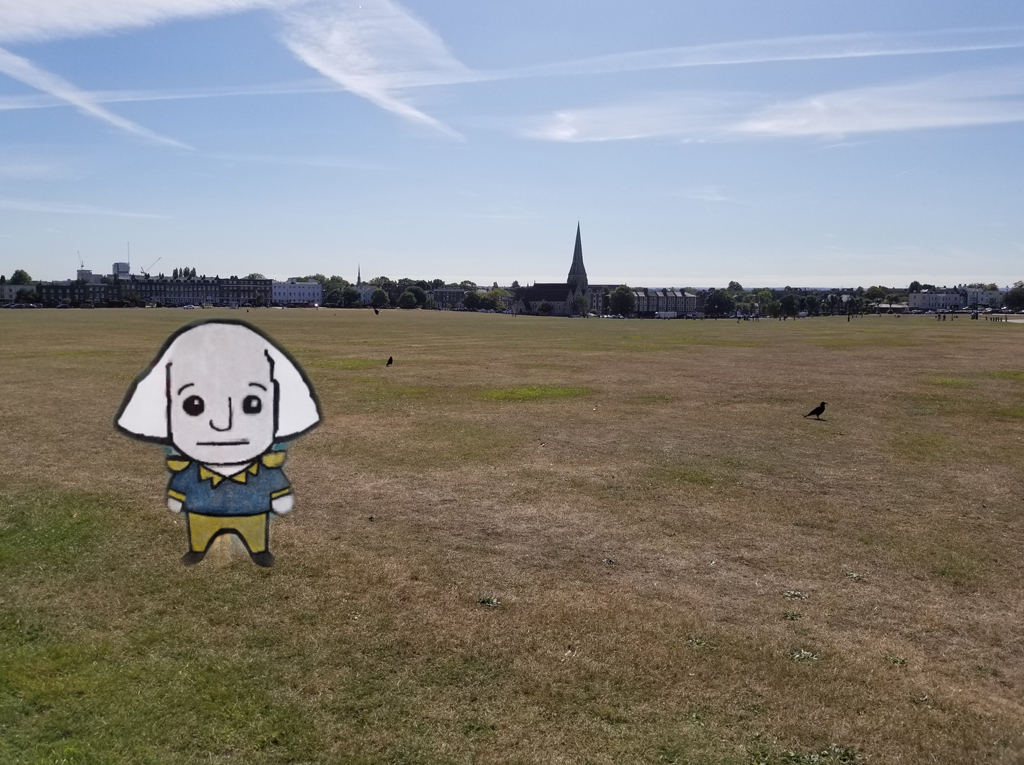 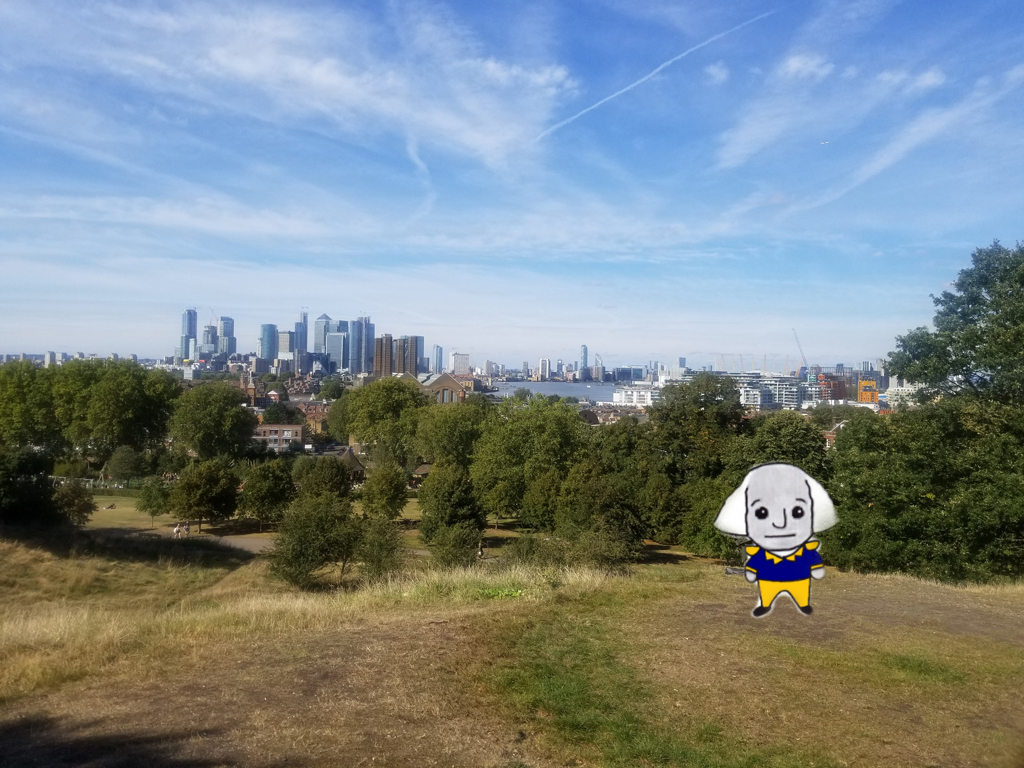 Little George stayed with a friend in Blackheath, straddling the Boroughs of Greenwich and Lewisham.  Blackheath is famed for its heath, or large field, while nearby Greenwich Park boasts impressive views of London. 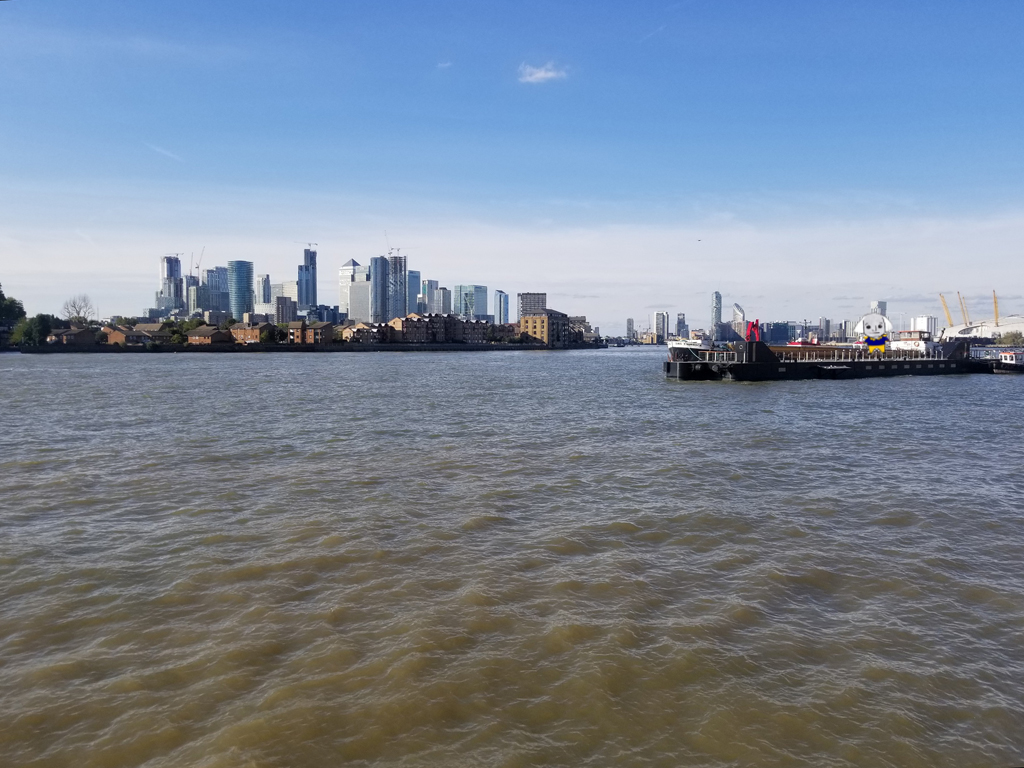 Little George relaxes at the Cutty Sark, an old pub in Greenwich built in the early 1800s on the spot of an even older pub that catered to sailors. 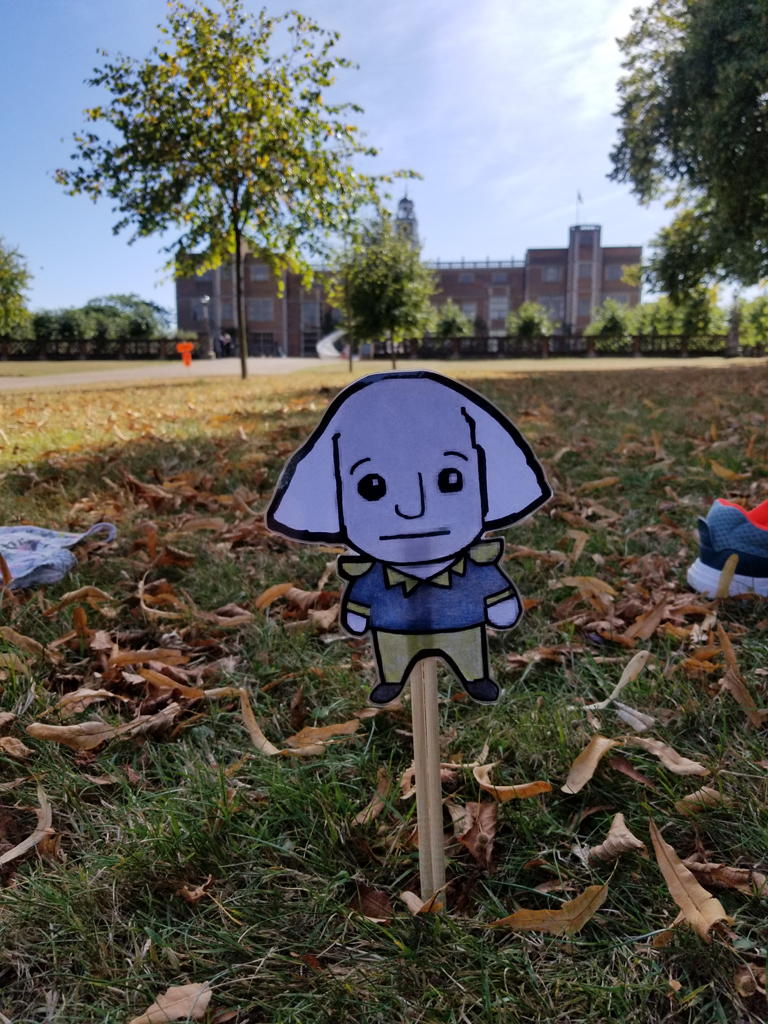 Little George near Saint Paul’s Cathedral. The site of a church since CE 640, the current cathedral was built by Sir Christopher Wren after the Great Fire of London in 1666 destroyed the previous church.

Little George at Old Royal Navy College, a UNESCO World Heritage Site, established in 1692 as the Royal Hospital for Seamen at Greenwich. Then, in 1873, it became a training site for the Royal Naval.  George himself nearly joined the Royal Navy as we’ve written about here.

Little George outside the Pillars of Hercules pub in Soho, which we’ve actually written about on the blog. 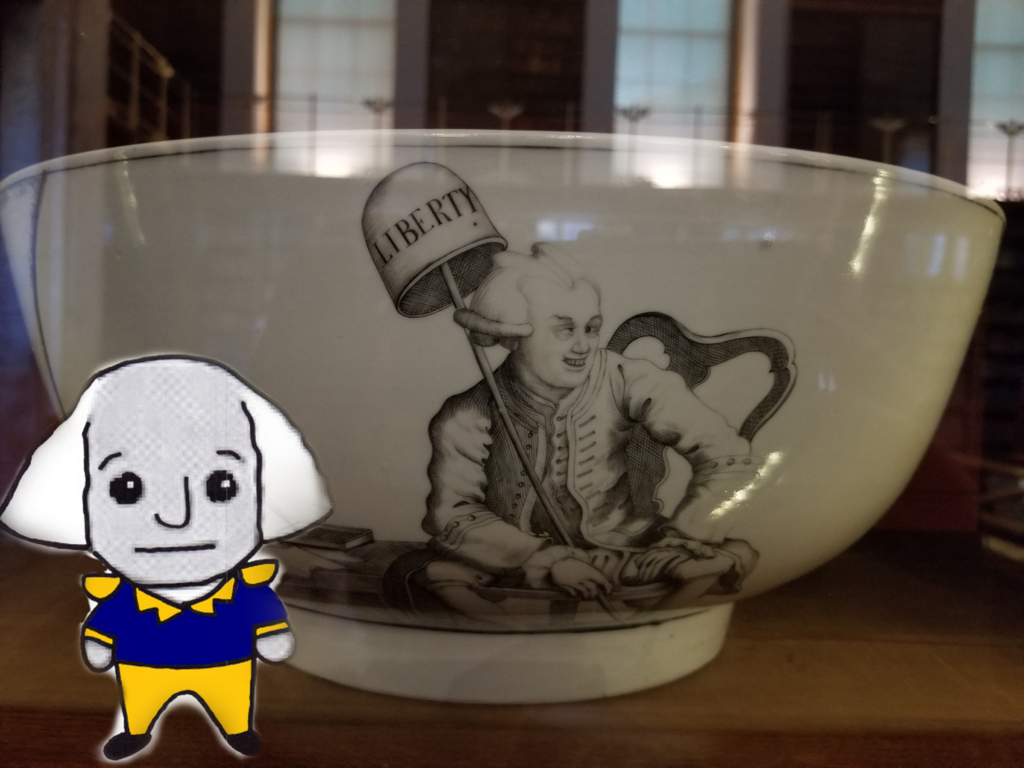 Little George toured the British Museum, founded in 1753, and saw an ceramic bowl decorated with an anti-colonial propaganda.  Personal objects often carried or were endowed with political symbolism. Read about the 18th century political significance of ceramics, cuff links, and pipes.

Little George at the door to Benjamin Franklin House, where Franklin, the colonies’ representative before the Crown, lived and worked for sixteen years from 1757 to 1775.

Little George outside Buckingham Palace, built by the Duke of Buckingham and acquired by King George III in 1761.  It is the main official residence of the present-day British monarch.

At the Museum of London, Little George looks at a nice pair of 18th century dentures that he probably wished he could have had instead of his painful dentures of cows, donkey, and human teeth encased in lead.  Read about George’s infamous teeth troubles here.

Little George with Tarleton, The Butcher.  Tarleton was a colonel in command of the British Legion, a contingent of Loyalist cavalry and light infantry. At the Battle of Waxhaws in South Carolina on May 29, 1780, Tarleton’s force ignored the white surrender flag of some Virginia Continentals led by Colonel Abraham Buford and killed 133 soldiers, severely wounded 150 others, and captured 203, earning his infamous nickname.  Tarleton also undertook some raids into Virginia and, for a time, it was feared he might come as far north as Fredericksburg or Mount Vernon to abduct George’s mother Mary, his sister Betty, or even his wife Martha. 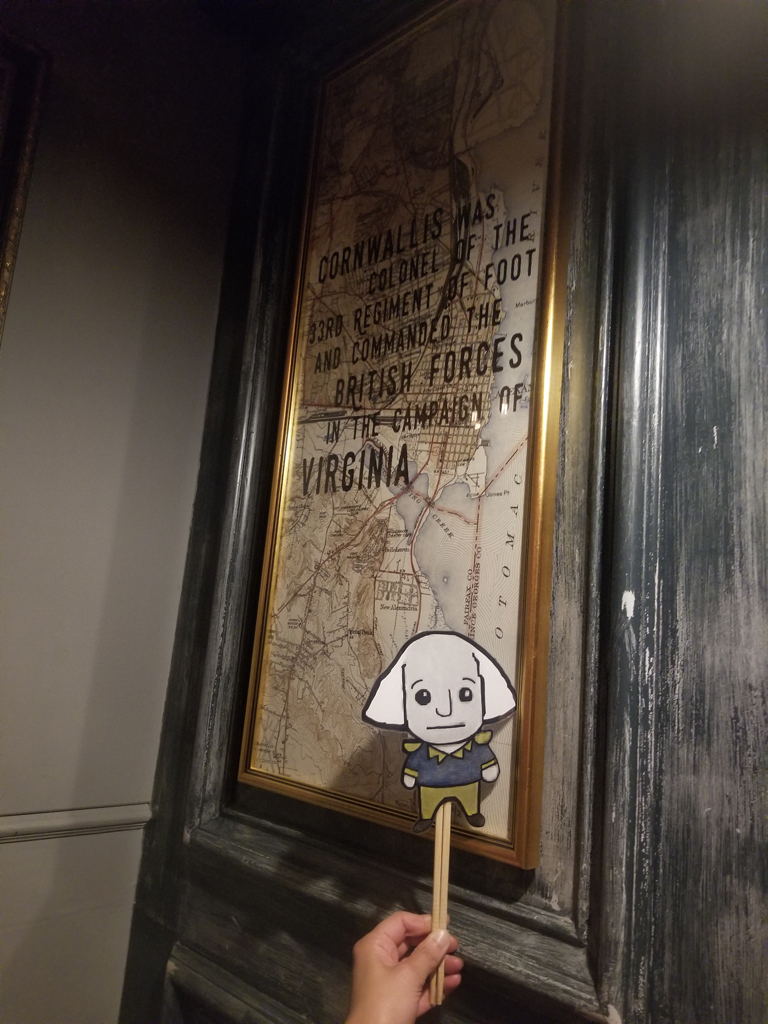 Little George at The Marquis Cornwallis, a pub in Bloomsbury, London.  Charles Cornwallis was a general in the British Army during the American Revolution whose surrender to George Washington in 1781 ended the Siege of Yorktown and ultimately the war in America.

Little George at the famed Westminster Abbey, coronation and burial site of numerous English and British kings and queens.

Little George stands next to a statue of himself outside The National Gallery.  The Commonwealth of Virginia gave the statue to Great Britain and Ireland and it was erected in 1921 on a square of American soil.  It is based on Jean Antoine Houdon’s marble statue in the rotunda of the Virginia State Capitol in Richmond. 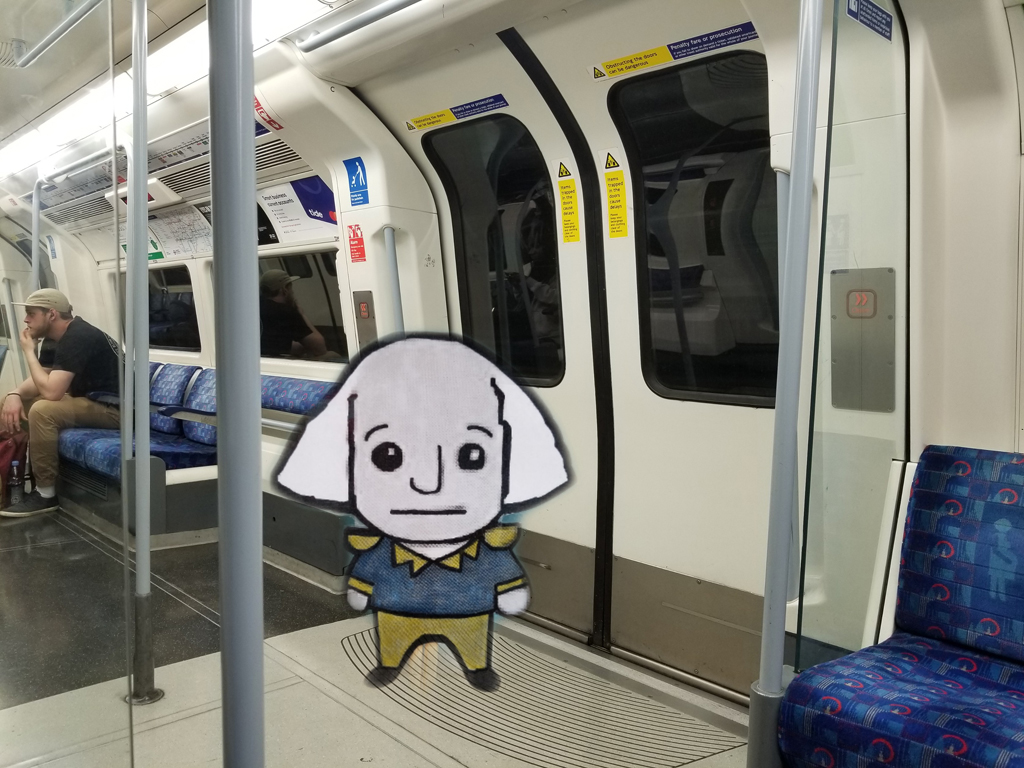 Little George rides the London Underground, which first opened in 1863, only 64 years after George Washington’s death. While the Tube was not around in his time, Little George approved of it as a great way to get around the city.