Today – January 6 – marks the end of Christmas or, at least, it did two centuries ago.   If we lived in the days of George Washington, Betty Washington Lewis, and Fielding Lewis and moved within their social circle, we would all be preparing for the grandest celebration of the Twelve Days of Christmas, which began on December 25.  This grand event, known as Twelfth Night, was celebrated much in the same way that many of us mark New Year’s Eve with family and friends gathered together for food, drink, sweets, music, dancing, games, and conversation.

This past weekend, Historic Kenmore hosted just such a celebration in the form of a theatrical presentation titled “Twelfth Night at Kenmore.”  Set in January 1776, as Fielding and Betty Washington Lewis end their first Christmas in their newly built home, “Twelfth Night at Kenmore” depicted an unusual seasonal celebration, as the growing American Revolution brings fear, doubt, and frustration to the Lewis family, their friends, and members of the enslaved community.

Kenmore is lit for the celebration.

Visitors, some who came dressed in colonial-era clothing, join in the singing.

Our excellent musicians for the evening: Zach, Kelsey, Kaylee, and Luke Payne.

Captain Taylor and George Weedon argue about the wisdom of suspending horse racing because of the war.

George Lewis (Will Goldstein) expresses his desire to enlist in the Continental Army. 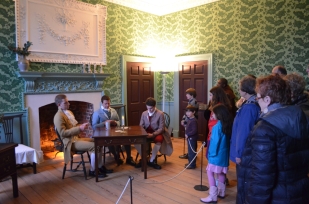 Hetty (Ashlee’ James), an enslaved washerwoman and house servant for the Lewises, overheard party guests talking about Lord Dunmore’s offer of freedom to slaves and wonders if she ought to run away to the British side. 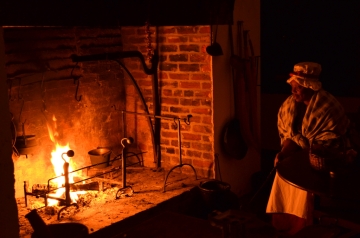