January and the start of the year are always a time of new beginnings.  Recently, while digging through archival material, I came upon an exciting collection of newspaper clippings and photographs that detailed the New Year’s purchase of Kenmore and the beginning of the old home’s transformation into a historic site to be enjoyed by all.

On January 1, 1925 — ninety years ago — a group of well-dressed women in hats and long fur coats assembled at Kenmore to hand over the final $1,000 payment and gain full possession of the house and land.  This meeting was the culmination of thirty-two months of persistent work and determination by the ladies of The Kenmore Association to save the historic property from destruction. 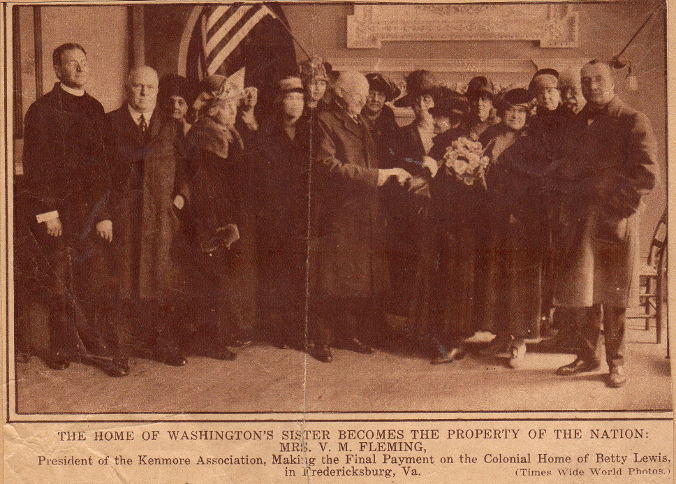 This crusade began four years earlier with a brief notice in the Fredericksburg Daily Star from Mr. E. G. Heflin, the owner of the Kenmore property.  The announcement stated: “I have decided to build at once…6 or more modern up-to-date residence [sic] on Kenmore.”  Built on a section of the plantation property, these houses prompted concern among many local citizens at the thought of further loss to the historic site.

By 1922, the destruction of the old Lewis home seemed imminent.  Mr. Heflin placed an advertisement for the sale of the house itself and cut up much of the original estate into smaller building lots to be sold to developers.  If the house was sold, it might be remodel into apartments or just razed to the ground.  This escalation increased the alarm even more and some tried to raise funds to purchase Kenmore.  This attempt proved unsuccessful and the house did look to be lost.  However, salvation appeared in the form of Kate Waller Barrett and the National Society of the Daughters of the American Revolution (DAR).

In March of that year, Mrs. Barrett, Virginia Regent of the DAR, came to Fredericksburg with the purpose of organizing a new chapter in the town.  She asked Emily White Fleming to lead the proposed chapter, which would work to save Kenmore.  Mrs. Fleming was 68 years old and, though seemingly small and fragile, she, in reality, had a tenacious and determined spirit.  She accepted the position and with the help of her daughter Annie Fleming Smith, known as “Miss Annie,” began their campaign to save the old Lewis house from destruction.

The ladies approached Mr. Heflin and negotiated an agreement to the purchase the property.  The group had to make a first payment of $10,000 within four months or the deal would be off.  Furthermore, if Mr. Heflin got a satisfactory offer within those four months, he could go ahead and sell the property outright. It was a tough deal but the ladies rose to the challenge spectacularly.

Mrs. Fleming and Miss Annie began fundraising immediately.  They wrote hundreds of letters by hand, stating facts about Kenmore in simple, forceful style and then making appeals for help. Mrs. Fleming recalled, “I could write thirty-nine letters a day and Annie forty-nine. We never had a typewriter until the campaign was over.” In response to one of Mrs. Fleming’s letters, Colonel Isaac Newton Lewis, maker of the Lewis machine gun and a descendant of Fielding Lewis, contributed the first $1,000. Not to be outdone, The Colonial Dames of America in the State of Virginia gave a substantial donation of a $1,000 as well.

Donation from Colonel Isaac Newton Lewis donated the first $1,000 to the Kenmore Association.

In July 1922, the Kenmore Association launched a public fundraising drive with a host of distinguished men and women coming to Fredericksburg for the start of the campaign. Even Calvin Coolidge, then the vice president under Warren G. Harding, made a speech (see below) pleading for patriotic Americans to save this home that was so critical in the history of the country.  “It ought to be preserved for its own sake,” Coolidge demanded, “It must be preserved for the sake of patriotic America.” 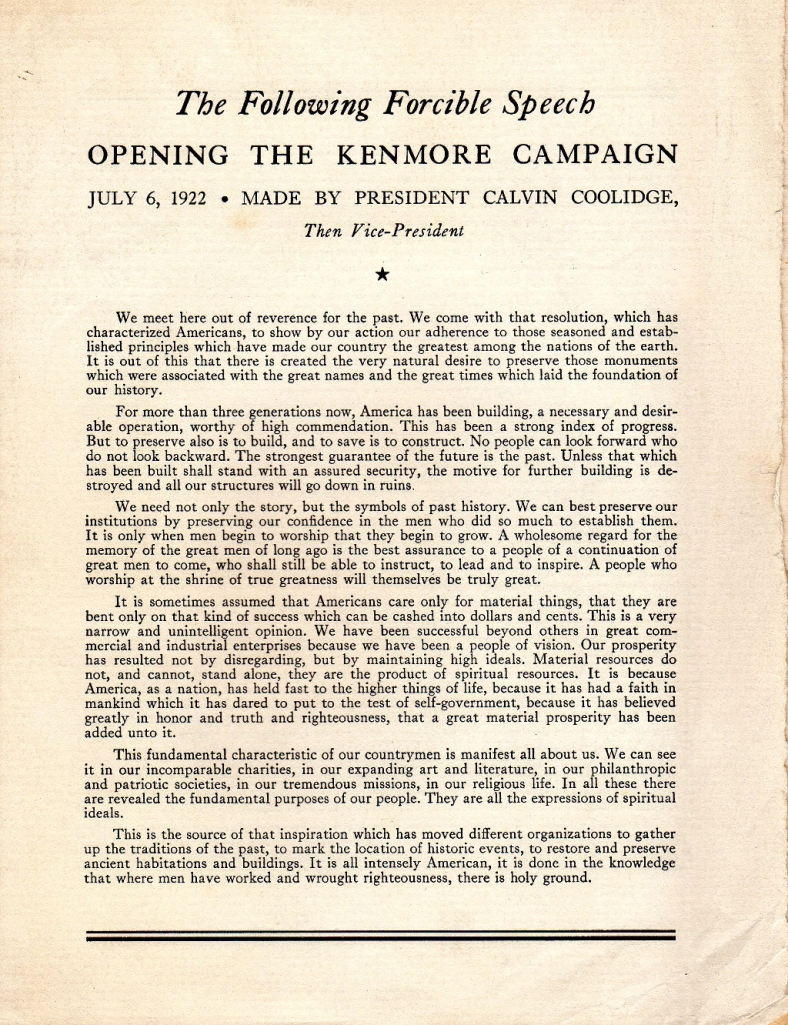 Speech made by Vice President Calvin Coolidge in support of the Kenmore Association’s effort to save the historic home.

Through the efforts of this determined group of women, by the first of September 1922, they were able to pay an initial installment of $12,000 on the account.  Impressed with the Kenmore Association’s work, Mr. Heflin made his own gift of $2,000.   By New Year’s Day 1925, the hard work paid off and the ladies made the final payment and took possession of the property.  Historic Kenmore was saved!

Although the purchase of Kenmore nine decades ago certainly marked a new beginning, transforming the house into a historic site for the public to enjoy required many more years of work.  Indeed, in many ways, the work begun by Mrs. Fleming, Miss Annie, and the Kenmore Association continues even as 2015 begins.  In the new year at Kenmore, we will focus on refurnishing Fielding’s office and will soon hang portraits of Fielding Lewis, Betty Washington Lewis, and other family members in the Drawing Room.  You can follow the year’s work here on the “Lives & Legacies” blog and on “The Rooms at Kenmore” blog, which is solely dedicated to the refurnishing project, at www.kenmore.org/wordpress.  Like 1925, the year 2015 should prove to be an exciting beginning!