Several months ago, Historic Kenmore concluded the refurnishing effort in the Dining Room.  After painstaking research and scientific investigation, that room has been returned to a state that would be immensely familiar to Fielding and Betty Washington Lewis.

It might look somewhat unfamiliar, however, to later occupants of Kenmore.  The first picture below was taken sometime between 1880 and 1902 when the Howard family occupied the house.

When, in 1881, Kenmore was purchased by Mr. William Key Howard of Maryland, the place was in deplorable condition.

Kenmore suffered considerable damage to its ornamental plaster ceilings during the Civil War. Young William K. Howard, Jr. urged his father to allow him to repair them. When scaffoldings were built, the artistic lad worked long and patiently making his own molds for replacement elements when needed.

The Howards saved the ceiling but, naturally, their goal was not to return the building to its colonial-era appearance.  When Kenmore became a historic house museum, changes still had to be made over many decades to achieve a historically accurate décor that closely resembles the one the Lewises would have known in the late 1700s.

The second picture shows the dining room as it appears today after meticulous restoration and refurnishing.  Comparing the two photos, we see the biggest architectural change to the room was the removal of the gothic arched niches on each side of the fireplace.  The arches were returned to the original square doors. 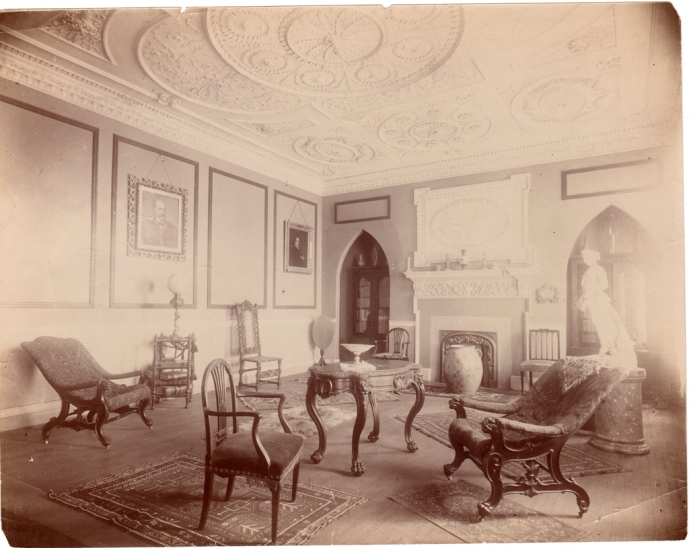 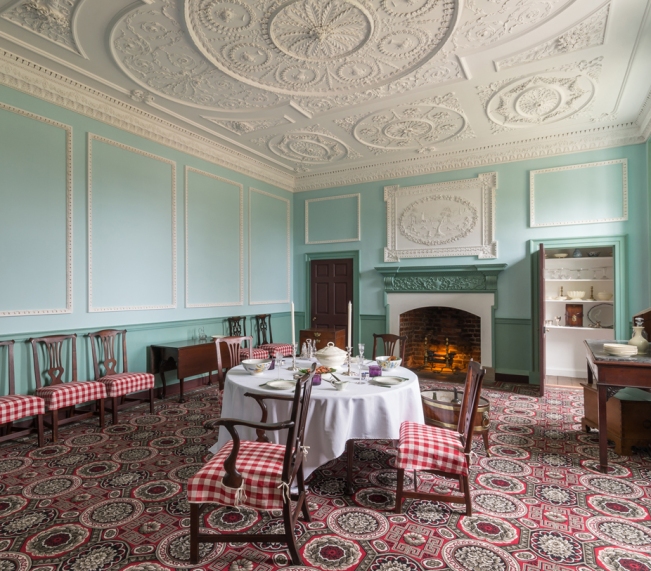 The narrow oak flooring, which replaced the original floor stained with the blood of Civil War soldiers who received medical treatment at Kenmore, was itself replaced with heart pine flooring.  Late last year, the floor was covered with a beautiful replica 18th century carpet.

Decorative coal grating and surrounding bricks were removed from the fireplaces making them larger.

The wood molding put on the walls to create false panels was removed and replaced with plaster molding whose original location was found during removal of paint during restoration work.

Those are just a few of the changes both large and small that can be seen when comparing these two photos.  The changes occurred over many decades and involved many dedicated people but each started, in many ways, with the Howards.  They and all the rest of us who have spent our days at Kenmore have taken something old and made it new again.