Fads come and go. Such is life.  Eighteenth century colonists were not immune to flash-in-the-pan trends.  However, given that information traveled a bit slower before the digital age, in the 18th century a ‘quick trend’ may have lasted 10 or 20 years, instead of 10 or 20 months.  Such is the case with ‘vegetable ware’, a refined earthenware molded to look like produce.  Imagine being the envy of all your colonial neighbors if you served them tea out of an elaborate ceramic cauliflower, pineapple, melon, or cabbage.  As evidenced by the archaeological record, Mary Washington, George’ mother, was similarly taken with the prospect of displaying her very own veggie-themed teaware.

The advent of vegetable ware seems to coincide with the development of bright green and yellow pottery glazes by a young and upcoming potter named Josiah Wedgwood in 1760.  He used these new flashy glazes for a number of applications, including coloring teaware molded to resemble produce.  While some combinations of ceramics and decorations had previously enjoyed decades or even centuries of popularity in the past, the demand for the initially popular vegetable ware seemed to drop off after only ten years, around 1770. At that time, Wedgewood indicated he was glad to send a shipment of overstocked vegetable ware to the colonies – a popular dumping ground for out of fashion or slightly damaged English goods.

Ceramic vegetable ware tea canisters made at the Josiah Wedgwood’s factory in England between 1754 and 1764. Credit: © Victoria and Albert Museum, London.

Mary seemed to prefer the pineapple form and owned at least one item, if not more, of this fruit-shaped tea equipage.  Her preference for the tropical fruit design was not unique.  In the 18th century, the pineapple was an incredibly sought after luxury item loaded with symbolism.  Today, many of us, especially along the East Coast, associate the pineapple with welcoming guests into our home and as a decoration for the holidays. Colonial Americans considered it a Christian symbol as well as a display of status. They readily incorporated it into the architecture of their houses, decorated room interiors with the motif, and served food and beverages out of pineapple-shaped objects.  These were all cheaper options than displaying an actual pineapple, which was well outside the price range of the average colonial American. In fact, there are accounts of people actually renting a real pineapple for a party rather than purchasing one outright.  Rented fruit!  Let that sink in for a second.

Returning to Mary’s ceramic pineapple, which is represented archaeologically by a dozen or so sherds.  It is almost certainly some type of tea equipage, although we are not exactly 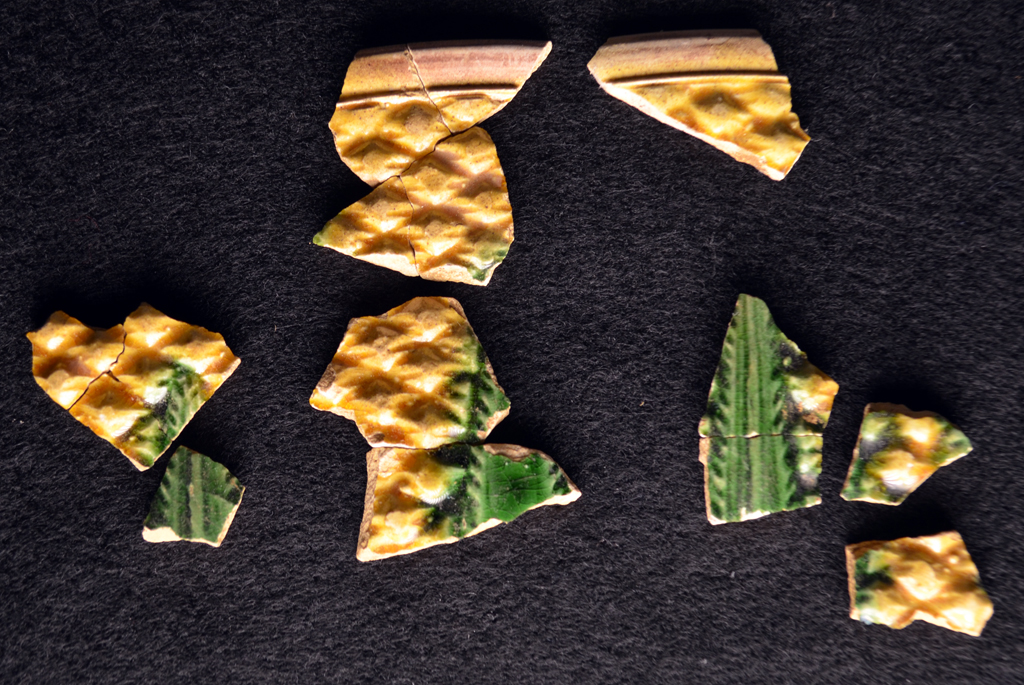 sure which tea vessel it may be.  The pineapple color and texture are unmistakable but we’ve yet to identify the specific object.  A number of forms have been ruled out. It is not a tea or coffee pot because it appears to be relatively squat with a straight or very gently sloping body and a wide rim.  What’s especially odd about this particular vegetable ware vessel is that the rim is unglazed.  This would seem to suggest that it sported a lid of some kind or perhaps endured a defect during firing.  Hopefully more of the vessel will come to light, we’ll be able to answer the question, and proudly display pineapple teaware in the newly recreated Washington house!