With hindsight, the events of history often seem inevitable.  America was destined for independence from Britain.  All colonists were patriots who saw themselves as a nation and a people separate from the mother country.  This was absolutely not the case.  Colonists’ views on the appropriateness of independence evolved with events.  Over time, British identity gave way to American identity.

The American Stars and Stripes and British Union Jack, the present-day flags of the United States and the United Kingdom. Credit: Hellerick / Wikipedia

We have written several blog posts about how colonists, including members of the Washington family, clung to their Englishness.  They expressed this identity through Westerwald mugs emblazoned with ‘G.R.’ for Georgius Rex in homage to three British kings named George, including George III who would be the foe of the American independence movement. They expressed their English identity through pipe bowls emblazoned with the British royal coat of arms.  Even as protests against their lack of representation in Parliament increased, colonists still hung onto their English roots through, in the Washingtons’ case, wearing cuff links emblazoned with an image of King William III, who “came to represent the right of subjects to resist a king who was abusing power.”

The shift from a British identity to an American identity took time as colonists gave up aspects of British culture while they resisted, first, governmental overreach and, then, ultimately embraced full national independence.

Tea was one aspect of English culture given up as a political act to protest British rule and to show support for the American cause.  Abstention from tea drinking began with the Tea Act of 1773.  Parliament passed the Tea Act to bailout the financially troubled East India Company (EIC).[1]  The government told the Company that it could ship tea directly to the colonies, duty-free.  The EIC could get rid of loads of tea piling up in their London storerooms.  Colonists could get tea that was cheaper than the illegal stuff smuggled in.  Everyone should have been happy.  But everyone wasn’t.  The tea the Company sold to the colonists was to be taxed under the Townshend Acts.  If colonists purchased it, they indirectly accepted Parliament’s right to tax them without representation.[2]

Tea became an emblem of British oppression and a boycott of the drink became a revolutionary act.  John Adams wrote to his wife Abigail that “Tea must be universally renounced and I must be weaned, and the sooner the better.”  Rejecting British culture, patriotic associations gave less than hospitable “tea parties” in Boston and Yorktown for merchants who continued to sell the politically incorrect brew.[3]  Less well-known was a tea party of sorts organized by the women of Edenton, North Carolina, who came together on October 25, 1774 and pledged to boycott tea and other British goods.  Whether politicians or housewives, Americans up and down the colonies joined these protests and vowed to never serve tea in their homes.[4] 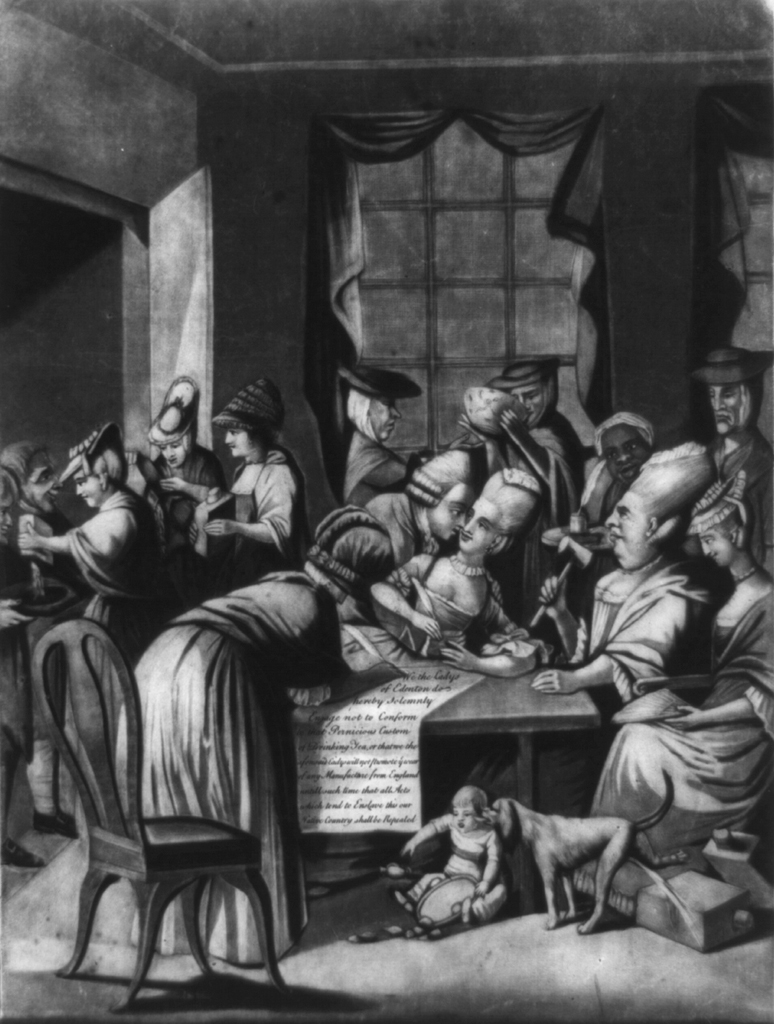 “A society of patriotic ladies, at Edenton in North Carolina” printed for R. Sayer & J. Bennett on March 25, 1775 in London. This satirical print shows American women pledging to boycott English tea in response to Continental Congress resolution in 1774 to boycott English goods. Credit: Library of Congress.

By at least May of 1774, Virginians near Fredericksburg had given up their tea.   Philip Vickers Fithian, tutor to the Carter family at Nomini Hall, visited some neighbors on May 19 and noted in his diary that he “Drank Coffee at four, they are now too patriotic to use tea.”[5] Indeed, as Fithan indicates and as we’ve previously explored in this post, coffee became Americans’ go-to substitute for tea.

Fithian did not seem all that enthusiastic about the tea boycott, however. A few months later, he got very excited when “Something in our palace this Evening, very merry happened—Mrs Carter made a dish of Tea. At Coffee, she sent me a dish—& the Colonel both ignorant—He smelt, sipt—look’d—At last with great gravity he asks what’s this?—Do you ask Sir—Poh!—And out he throws it splash a sacrifice to Vulcan” [meaning the Roman god of fire, of course, and not Spock’s homeworld on Star Trek].[6]  While “the Colonel” Robert Carter III “did not volunteer for political or military service during the Revolution. He did, however, sign the Virginia loyalty oath and supported the non-importation agreements drawn up by the First Continental Congress.”  He patriotically did not partake of the British beverage but Fithian clearly missed his tea.

For those who disliked coffee or simply still wanted tea, there was a black market to provide one with British tea but there were also American-grown substitutes that adhered to the boycott and came to be known as “Liberty Teas.”  Dr. Leonard Perry, extension professor at the University of Vermont, provides an excellent summary of tea substitutes used by early Americans during their tea boycotts…

“One of the most common substitutes was the native American shrub New Jersey tea (Ceanothus americanus), also known then as Indian tea or Walpole tea.  Leaves of raspberry also were commonly used for these colonial teas, as were sweet fern and spicebush. Bark from some trees such as sassafras and willow were used.

Common flowers used for the Liberty teas were sweet goldenrod (Solidago odora), red clover, chamomile, and violets.  Leaves of herbaceous plants such as bergamot (bee balm or Oswego tea), lemon balm, and mints were brewed as many are today.  Many herbs were brewed in the 18th century including parsley, thyme, marjoram, rosemary, and sage. Native Americans introduced the colonists to many of these plants which they often brewed to use medicinally.  Even some fruits were used in colonial teas, including those of dried strawberries, blueberries and apples.  Rosehips, rich in vitamin C and used today in teas, were used then as well.  “Indian lemonade tea” was made from boiling the berries of the red sumac.

Often ingredients were combined, such as a common tea recipe of that time including equal parts sweet goldenrod, betony, clover, and New Jersey tea.” 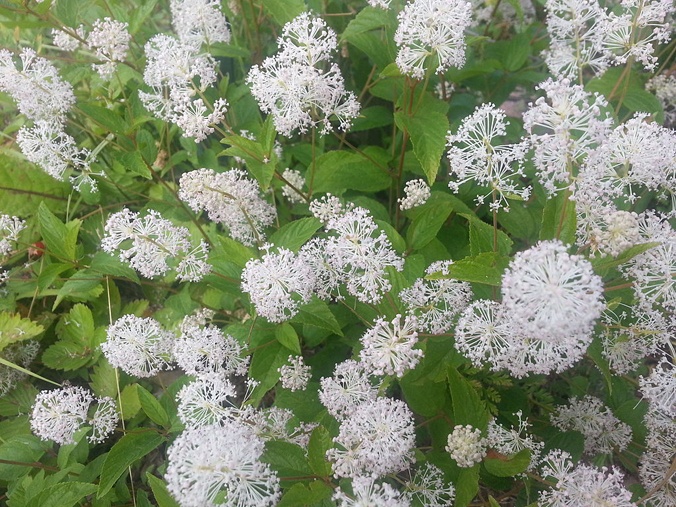 Tea would return to American tables following the successful War for Independence.  There are several receipts from the 1790s that show Betty Washington Lewis purchasing tea, including a type of imported Chinese green tea, at Kenmore.  But, for the most part, these imported teas as well as the herbal liberty teas were ultimately eclipsed by coffee, which became, like tea for the British, the drink synonymous with American culture.

Visit Historic Kenmore on Saturday, May 4 for “Tea and Tour: The Ladies of Kenmore” focusing on the many generations of ladies who have called Kenmore home! Enjoy Kenmore tea and gingerbread while experiencing eighteenth-century tea service first hand. See the first floor of the mansion, learning the history of the grand 1775 home through vignettes, and meet a few of the extraordinary ladies of Kenmore along the way as part of this dramatic tour.

Event admission is $20 Adults and $10 under 17.  Reservations required and there are only a very few spaces left. For more information and reservations, please call (540) 370-0732 ext. 24 or email events@gwffoundation.org.