Porcelain is the king of all ceramics.  As resilient as it is beautiful, porcelain has long fascinated many people.  During the Ming Dynasty (1368-1644 AD), the Chinese began exporting porcelain to Europeans, who coveted the precious dishes to the point that porcelain became more valuable than gold.  Europeans obsessed over how it was produced and various countries sent spies, attempted to kidnap those with the knowledge, and sought to steal texts describing the process.  The Chinese closely guarded the secret, however, and the recipe for the clays and how to get the firing temperature high enough (between 2,200, and 2,600 degrees Fahrenheit) remained a mystery.  The Chinese had been making hard-paste porcelain (as opposed to soft-paste porcelain, which was considered less desirable) for over a thousand years.  That’s a well-kept secret, folks.

In the 16th century, the first Europeans attempted to make porcelain in Florence but without success.  Following that, Portuguese traders returned from China with kaolin, a clay found to be key in making porcelain, but they didn’t know what else to add to it so it would survive the high firing.  Then, around 1700, a teenage alchemy apprentice with poor judgement named Johann Friedrich Böttger boasted that he knew the secret of the Philosopher’s Stone, a substance that would turn base metals into gold.   Word got out and he was kidnapped first by Frederick I of Prussia and then Augustus II the Strong of Poland.  Augustus locked him up in Dresden and ordered him to make good on his claim.  Obviously he couldn’t and to avoid being killed by the increasingly impatient king, he reluctantly partnered in 1707 with Ehrenfried Walther von Tschirnhaus, a scientist working on developing porcelain.  Combining their efforts resulted in the first hard-paste porcelain manufactured in Europe and resulted in the establishment of the Meissen porcelain factory in 1710.

But the intrigue doesn’t end there.  In 1712, Father Francois Xavier d’Entrecolles, a French Jesuit, learned the secrets of how the Chinese manufactured porcelain with the help of Chinese he had converted to Catholicism.  He published a letter detailing the process, in what was arguably an act of industrial espionage, and it began circulating through Europe.  To further complicate matters, Samuel Stölzel, an employee of the Meissen factory, which fought hard to prevent its employees from blabbing about their secret for making porcelain, fled the factory’s oppressive conditions in 1719. He made it to Vienna, where he promptly spilled the aforementioned secret.  Within a few decades, porcelain was being produced widely across Europe.  Although Chinese porcelain was still highly valued, their exports began to drop off.

As evidenced by all this thievery and espionage, porcelain was a big deal.  Owning porcelain was a sign of status and refinement.  If you were of the European upper class, it was imperative that you own these fancy dishes AND show them off whenever possible.  It was no less imperative for the gentry class in British North America.  Archaeological analysis of the Washington family’s porcelain illustrates that they were very much a part of this culture of conspicuous consumption when they lived at Ferry Farm. 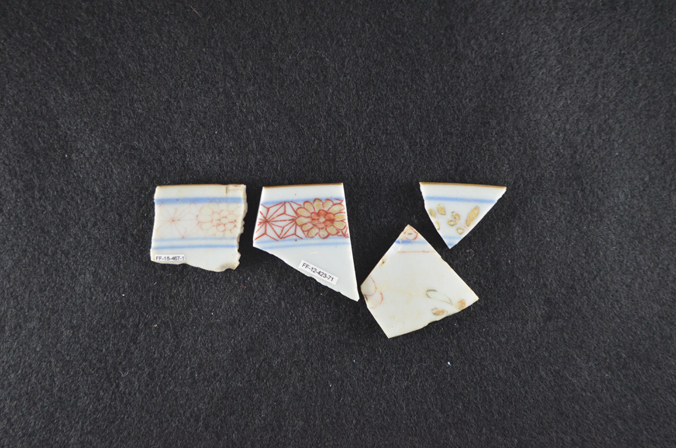 Rim and body sherds from a hand painted punch bowl in the Imari palette.

Our current mending project, piecing together porcelain sherds recovered from Ferry Farm, revealed dozens of distinct dishes once owned by the family.  George Washington’s mother Mary owned porcelain predominantly from China.  Interestingly, all were teawares as opposed to dinner wares.  While dinner was definitely a time to show off one’s ‘good china’, colonial tea time was arguably an even better opportunity.  Serving tea in the 18th century had a large ceremonial aspect and was an opportunity for those participating to show off how cultured they were while serving a beverage (also from the distant locale of China as well as India) linked closely to high status.  Perhaps Mary, a widow on a budget, decided to put her limited resources into more conspicuous teawares rather than dinner plates and bowls.  Previous analysis in our archaeology lab indicates that Mary preferred a ceramic called white salt-glazed for her dinner dishes.

It has also been interesting to discover the china patterns that Mary favored, which include landscape scenes, abstract geometrical designs, and floral patterns.  While she did not appear to own ‘sets’ of china she did have cups that matched saucers, a further illustration of refinement.  As complete sets of china were not common in the middle of the 18th century, one could attempt to match up similar color palettes.  Although we’ve identified dozens of motifs in our collection, there is little evidence for Mary matching the palettes of her porcelains.  Her table, as with most colonial households, was a lot more varied in colors and patterns than we expect in the modern day.  Mary’s porcelains were delicate and skillfully hand-painted with brushes sometimes containing no more than a few bristles.  Many of the teawares are also gilded, which was a premium type of decoration for the time. 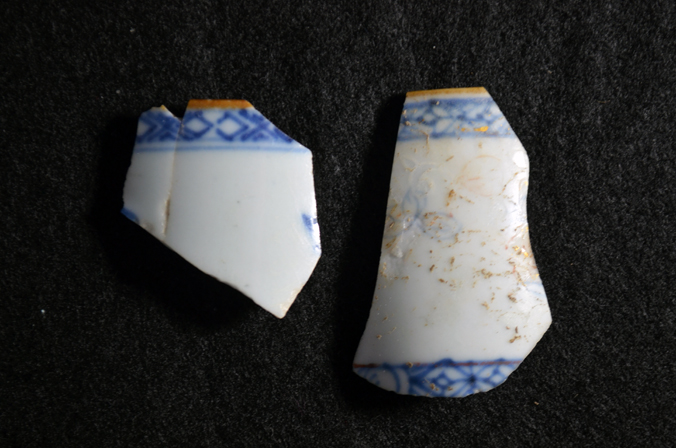 In addition to teacups and saucers, our archaeologists have identified one tea canister and a few coffee or chocolate style cups, which tend to have taller and straighter sides and be of a smaller diameter.

With this mending experiment under our belt it’s on to the next one in our never ending quest to learn as much as we can about the Washington family!