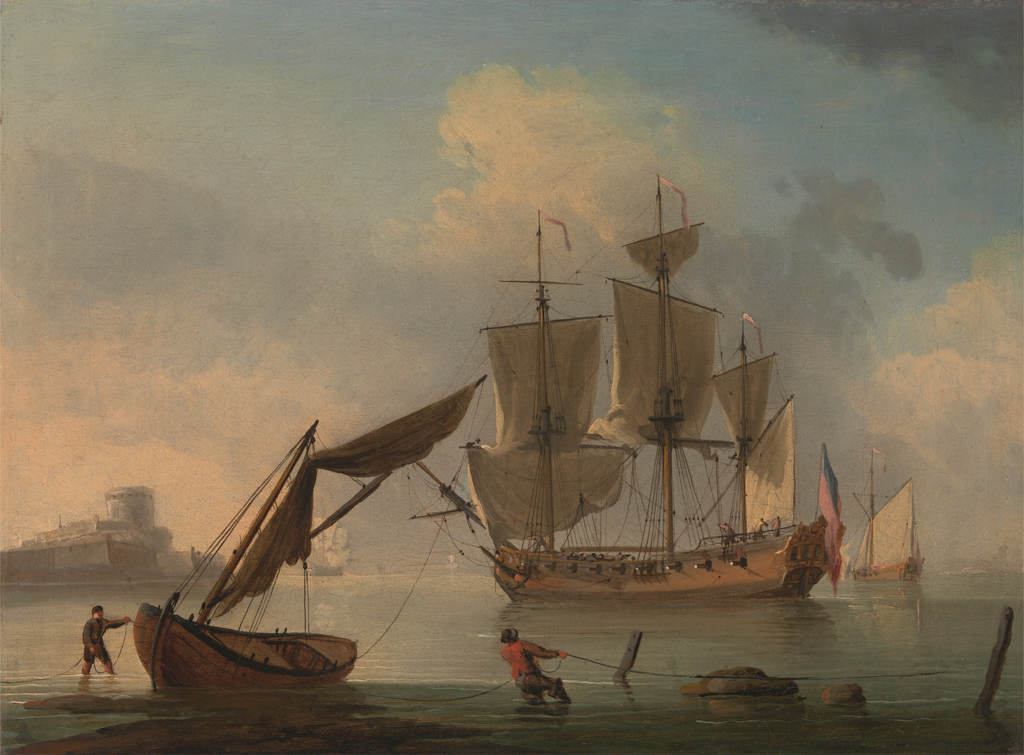 George Washington’s Ferry Farm is located on a hill overlooking the Rappahannock River.  That river connects to the Chesapeake Bay and eventually the Atlantic Ocean.  When young George Washington lived at Ferry Farm, the Rappahannock was a gateway to the entire world.  Fredericksburg was a port town on the river’s opposite bank from the farm and small ocean-going sailing vessels traveled up the Chesapeake and into the Rappahannock to dock at the bustling town’s wharves.  Ships like the brigs Stanton and Priscilla as well as the schooners Grampus and Penguin brought goods to buy, news from the rest of the British Empire, and occasionally people to settle and work in the colonies.

Growing up next to the river influenced the young Washington.  He got to experience life at sea first-hand when he left Ferry Farm and sailed to Barbados at the age of 17. Also, for a time, the family debated whether teenage George should pursue a career in the Royal Navy.  Moreover, at Ferry Farm, the Washingtons produced and consumed the goods that ships plied back and forth across the ocean.

George Washington, his family, slaves and neighbors were members of what historians call “The Atlantic World,” a global community of many different peoples taking part in the trade that traveled back and forth across the Atlantic Ocean.  Washington, his brother-in-law Fielding Lewis, and other Fredericksburg residents saw sailing ships on the Rappahannock every day and interacted with the sailors from those ships every day.  They supplied the ships with goods to take to destinations far across the sea and then bought the goods these ships carried when they returned.

In the 1600s and 1700s, tobacco was Virginia’s most important export but, at the same time, many planters along the Rappahannock chose to export things like wheat, foodstuffs, timber, and other raw materials used to manufacture goods.

Broadly speaking, these manufactured goods were made in Europe using the raw materials exported from the Americas.  Europe then sent the manufactured goods to Africa as well as back to the Americas.  In Africa, they were used to buy slaves while, in the Americas, they were used to purchase more raw materials.  This movement of goods has long been referred to as the “Triangular Trade” because of the triangle shape that the goods traveled when traced on a map.  Of course, this is a very simplistic description of a very complex network of trade that really spread across the globe.  Still, a triangle is a useful way to imagine, understand, and remember the basics of the process.

Washington’s brother-in-law Fielding Lewis and the Lewis family built and owned ships that transported goods throughout the Atlantic World. Records of these ships’ voyages help illuminate the Triangular Trade and also how Atlantic trade routes often did not look like a triangle at all. 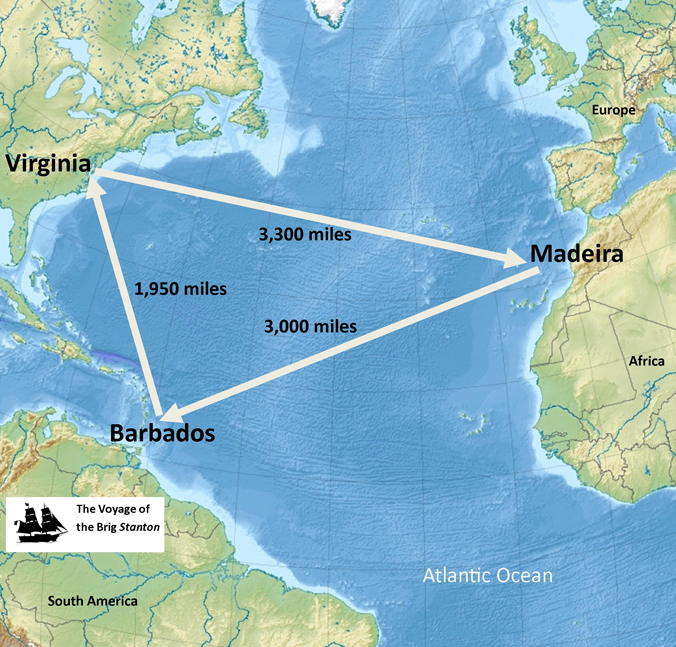 In one of the earliest voyages of a Lewis ship, the 80-ton brig Stanton – owned by Fielding’s father John Lewis and captained by Richard Williams – made a roughly six month voyage in the first half of 1732. The Stanton was bound for Madeira, an island off the coast of Portugal, and then Barbados, an island in the Caribbean Sea, before returning to Virginia. Its voyage is a perfect illustration of the Triangular Trade and we’ve written about it here.

But the Atlantic trade was not always a triangular one.

During the first half of 1737, the Lewis brig Priscilla sailed directly to London and back under the command of Richard Williams and carrying 192 hogsheads of tobacco, six tons of iron, and 5,000 staves.[1] The ship returned to Virginia with “European goods” and, after a brief stop at Madeira, added some wine to its cargo. 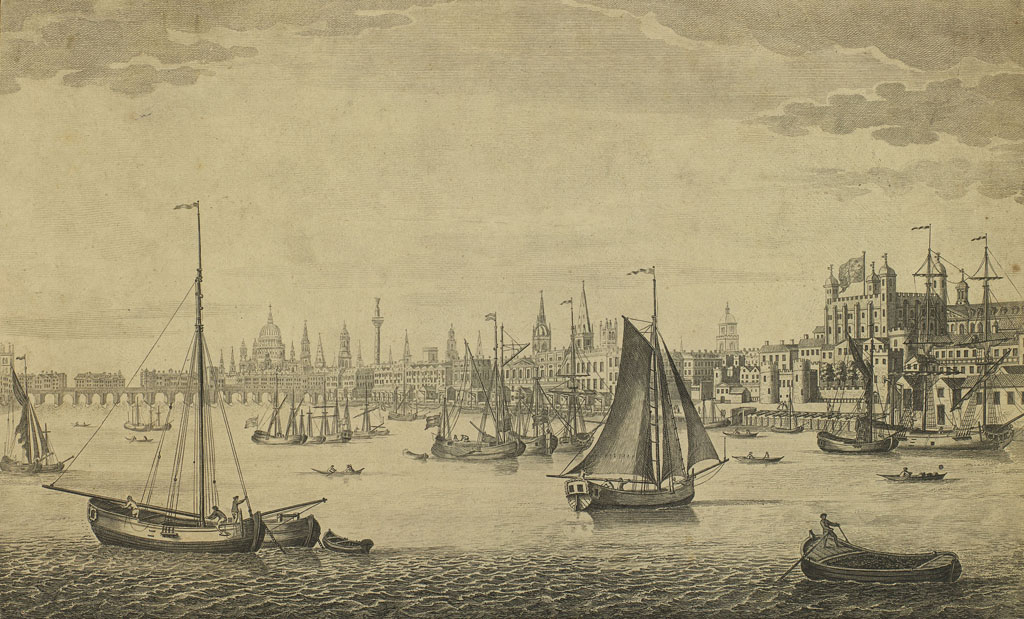 The next year, the John Lewis-owned schooner Grampus mastered by John Briggs set sail with 300 staves, 600 bushels of corn, 900 bushels of peas, 180 bushels of wheat, 1 hogshead of wine, and 400 feet of walnut plank bound on a direct voyage to and from “New England.”  It returned with 5 hogsheads and 6 barrels of rum, some molasses, cider, oil, and “New England Ware.”

Finally, about a decade later, we find another John Lewis-owned ship departing Virginia.  The Penguin, a schooner captained by Will Whitterong with a crew of six, set sail for Antigua in the Caribbean on March 1, 1745 carrying 100 barrels of pitch, 303 barrels of tar, 35 barrels of turpentine, 100 bushels of peas, 8 barrels of tallow, and 13,800 shingles.  The Penguin arrived at Antigua on May 17 and returned to Virginia on June 5 with a cargo of 30 hogsheads and 1 tierce[2] of rum, 27 barrels of sugar, and British goods.

Did some of the items these ships brought back from across the Atlantic end up at Ferry Farm to be consumed or used by George Washington and his family (or the Strother family, the farm’s earlier occupants)?  It’s unlikely but not impossible.  Many of the items excavated by archaeologists at Ferry Farm definitely fit the descriptions “European goods,” “New England Ware,” or “British goods.”  Westerwald jugs, Bartmann bottles, white salt-glazed stoneware fruit dishes, and glass wine bottles all journeyed across the Atlantic to be used by Ferry Farm’s residents, then broken, thrown away, and buried, eventually to be recovered by archaeologists. No matter who actually used them, these recovered items represent the people and way of life of the 18th century’s Atlantic World made possible by the ships Stanton, Priscilla, Grampus, and Penguin.

[1] Staves are the curved lengths of wood used to make barrels, buckets, or, in this case, pipes. Yes, wooden pipes.

[2] Tierce is an archaic measure of wine that roughly equaled 35 gallons. The term was also used as a synonym for cask, which seems what is meant in this case.