Today, we continue our look at the different ceramics displayed or soon to be displayed in the Washington house at George Washington’s Ferry Farm.  We’re examining the artifacts recovered at Ferry Farm, the complete 18th century objects those artifacts represent, and the reproduction pieces inspired by these artifact sherds as well as by the complete originals.  Last week, we learned about the blue and white Chinese Export Porcelain reproductions gracing the house.  This week, in the second post of this series, will investigate the white salt-glaze stoneware and the Westerwald stoneware. 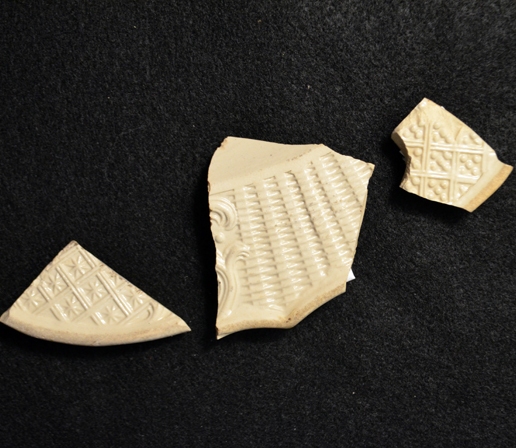 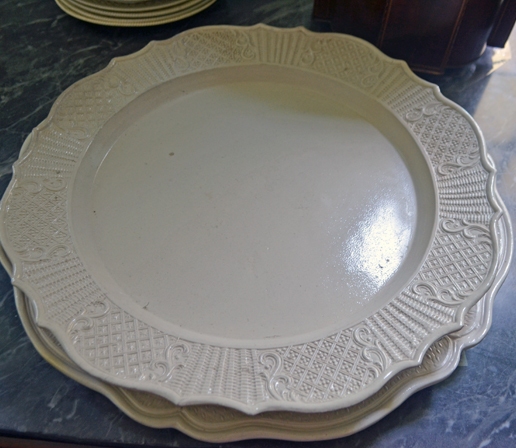 Molded WSG came into existence in the 1740s, so the Washington family was right on trend.  A few decades later, creamware would replace it as popular dinnerware, but the rim patterns found on WSG were often very similar to those used on later creamware. 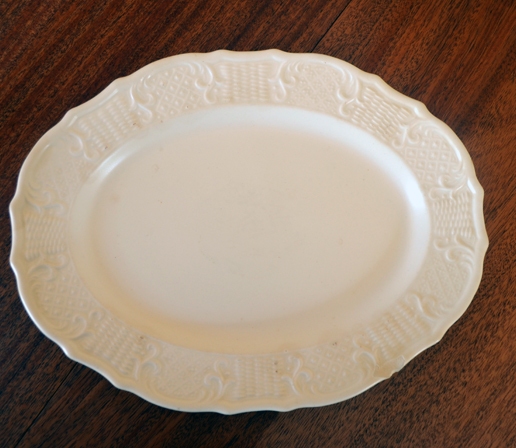 During the height of the Colonial Revival decorating style in mid-20th century America, the patterns used on WSG and creamware back in the 18th century had a major resurgence.  Several American potteries started producing white stoneware table wares, similar to WSG, with glossy surfaces similar to creamware, using molded rim decorations that were almost exactly like their 18th century predecessors.  The Canonsburg Pottery outside of Pittsburgh, Pennsylvania, produced dot/diaper/basket plates under the pattern name of American Traditional from the early 20th century through the company’s closure in 1978.  The Red Cliff Company pottery in Chicago produced plates with a rim pattern taken from the “royal” rim style on 18th century creamware (which was similar to an earlier WSG rim) under the pattern name Heirloom from the 1950s until their closure in 1977.  Similarly, Sears sold an almost identical plate under the pattern name American Federalist until the mid-1980s.  Luckily for us, all of these 20th century patterns are collectible and we found many of them in stores and on-line.

The above fragment came from either a mug or a jug made from grey stoneware decorated with cobalt blue glaze, known as Westerwald.  The Washington family owned quite a bit of Westerwald ceramic, as did the Lewis family at Kenmore.

Westerwald pottery originated in 17th century Germany, and it is still produced there today.  It was a popular style for traditional German steins, often with pewter lids attached.  In the 18th century, it was often made for export to England and was therefore decorated with the “GR” emblem, referencing Georgius Rex (King George). 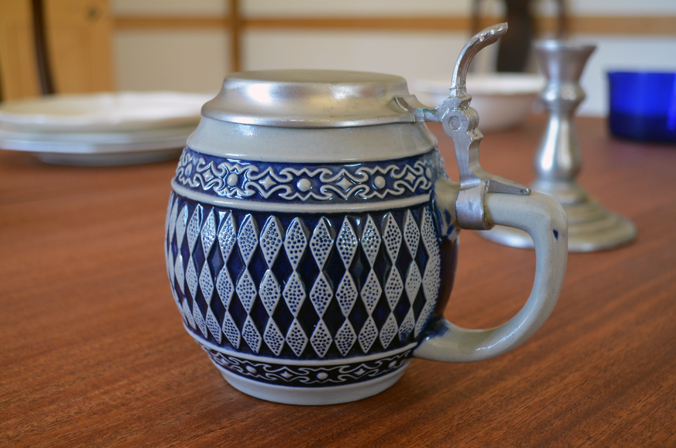 During one of our treks through a thrift store, we came across this lidded Westerwald mug, and we were amazed at how similar to our 18th century fragments it was.  So amazed, in fact, that we questioned whether or not it might actually be an antique piece (that somehow remained in pristine condition)! A look at the bottom revealed a very 20th century maker’s mark, however, but it also spurred a desire to find out more about the company that was producing such excellent Westerwald. The mark indicated that the

piece was “Original Gerzit,” and some internet research revealed that the Gerzit Company in Höhr-Grenzhausen, Germany, was originally the pottery founded by Simon Peter Gerz in 1857.  The family owned and continued to operate the pottery through World War II, at which time they changed the name to Gerzit.  By German law established in 1887, Westerwald produced for export has to be marked Made in Germany.  Westerwald produced for sale in Germany doesn’t have to carry a mark at all.  Any Westerwald produced after World War II for export has to specify whether it was made in East or West Germany.  Putting all of that together, and comparing it to the mark on our newly acquired mug, shows us that it was produced sometime between 1949 (when the company name changed) and 1997 (when the company closed) and was originally intended for sale within Germany.  How it ended up in a thrift store in Virginia is anyone’s guess, but it was a very lucky find for us!

In part 3, we’ll revisit Chinese Export Porcelains to see imari and famille rose artifacts, originals, and reproductions that will go in the Washington house.